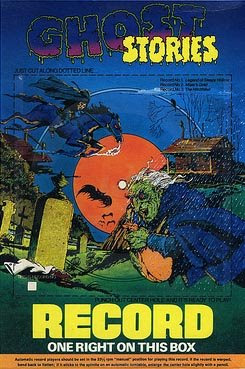 I used to have this Honeycomb Cereal ghost stories record (circa 1970s). The record was literally pressed into the back of the cereal box itself. You cut it out with scissors (in a square shape, no less) and plopped it on your turntable.

There were 3 possible stories (although the artwork remained the same for each variation...the only way to know which record you had was to check the record number in the bottom left corner). 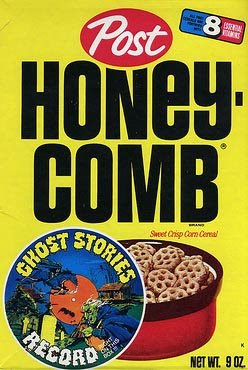 I had "The Miser's Gold". Click below to listen. The other possible stories were "The Headless Horseman" and "The Hitchhiker" (you can see the tell-tale sweater still sticking out of the foot of the gravestone).

(with thanks to Scar Stuff for the rip)
Posted by Brother Bill at 8:22 PM

I had this too! I remember that some of these skinny little records actually had little dotted-line circles printed on them -- you were supposed to put coins in those spots to weigh the record down and make it play better.

Yes, I remember those too! There were also some that were super-flimsy, almost like a peice of paper, and they could be attached to the inside of a magazine. You tore them out and set them on top of a regular record in order to play them.

I think that there was one of a scary story in a flimsy record from the old Jack-in-the-box restaurant. They were known as the Jack in the box bunch as they explored some old haunted house.

Kids today have no idea what they are missing....