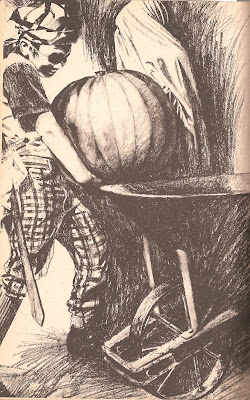 The illustration above is a scene from Havoc on Halloween, the fifth chapter from "Soup & Me" (1975, Robert Newton Peck, illustrations by Charles Lilly). 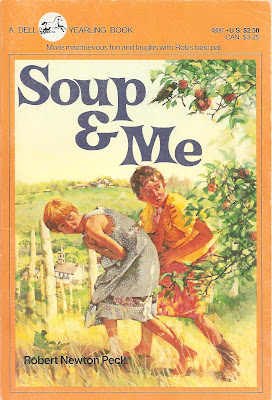 Second in a series, "Soup & Me" chronicles the episodic misadventures of grade school boys Robert Peck (the author's surrogate) and best friend Luther Vinson a.k.a. "Soup" in a small rural town in circa 1930's Vermont. Rob is basically a good kid who lets himself get goaded into one predicament after another by Soup, whose penchant for mischief falls somewhere between Huckleberry Finn and Bam Margera.
When they aren't planning some kind of revenge against their recurring nemesis, female bully Janice Riker, they're trying to give each other haircuts with yard shears so they can use their barber money for candy, or assembling a rickety soapbox car from an old wash basin and duct tape.
These are FUNNY stories, which I first became aware of when they were adapted for an episode of the ABC Weekend Specials (The Trouble With Miss Switch, Bunnicula, The Red Room Riddle and The Ransom of Red Chief are some other children's titles adapted for the series). 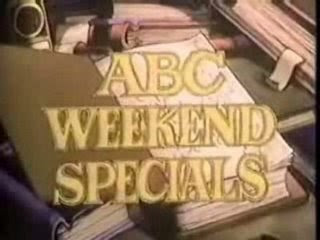 Here's a freeze frame of the pumpkin-transporting scene which appeared behind the end credits of the TV special. 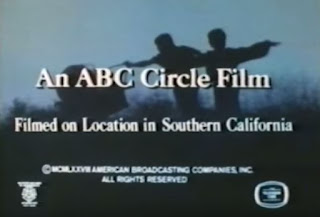 After enjoying the TV episode, I sought out the source material at the school library, and found the books to be even better, thanks to author Peck's gift for prose.
Take this passage, where Soup is convincing Rob to steal a prize pumpkin from a neighbor's patch:


I looked where he pointed, and sure enough, there was the biggest old pumpkin in the whole State of Vermont. I wanted to say something, but the words that came to mind just weren't big enough or orange enough to fit the size.
"That's some vegetable." said Soup.
"You know Soup...if God were to carve a jack-o-lantern, that there is the one pumpkin he'd pick."

Soup uses his influence to talk Rob into loading that jumbo pumpkin into a wheelbarrow, with the ultimate goal of arriving with it at the church Halloween party looking like a couple of heroes. Unfortunately the church is at the bottom of a very steep hill, and you can probably guess that even though everything doesn't go to plan, they still end up making one memorable entrance.
Posted by Brother Bill at 8:35 PM

Not only did Robert Newton Peck write some great stories he also wrote one of my favorite how to books for budding writers FICTION IS FOLKS.

It was informative and funny as Hell. After you read it you feel like you've spent a long afternoon talking to the man.