Scary Stories To Tell In The Dark with original Stephen Gammell illustrations is back! 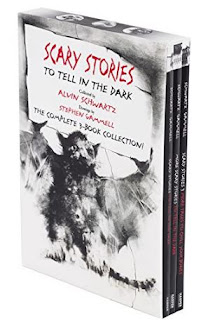 Hot on the heels of the surprising news that Usborne Publishing's World of the Unknown: All About Ghosts book was returning to print in a facsimile edition, I am pleased to discover that Alvin Schwartz's Scary Stories To Tell In The Dark trilogy has been rereleased with the original Stephen Gammell artwork restored!

You may recall back in 2012 Gammell's soul-scarring black and white illustrations had been replaced with new art by Brett Helquist done in a completely different style, which I described in a previous post as "the labor of a competent and perfectly sane artist."

I'm guessing we can thank the new Scary Stories To Tell In The Dark feature film, directed by André Øvredal (Troll Hunter, The Autopsy of Jane Doe) and produced by Guillermo Del Toro (everything cool) for invigorating interest in the title, as the film faithfully adapts Gammell's original designs in three horrifying dimensions.

Email ThisBlogThis!Share to TwitterShare to FacebookShare to Pinterest
Labels: books, Scary Stories To Tell In The Dark, Stephen Gammell

World of the Unknown: All About Ghosts is back in print----WHAT?

One of my favorite treasures from the haunted library is the 1970's Usborne World of the Unknown series, particularly the tome dedicated to Ghosts, which I covered in a previous post here.

In a surprising bit of good news, this long sought after rarity is back in print, apparently after a successful campaign and petition organized by British actors Reece Shearsmith (Doctor Who, League of Gentlemen) and Nick Frost (Shaun of the Dead, The World's End). Read all about it at The Guardian.

I don't have the new edition in hand (it doesn't release in the U.S. until October 3, 2019) but it appears to be a facsimile reprint, save for a new forward by Shearsmith. Pre-order now at Amazon!

Seems as good a time as any to remind you that another of my personal favorites, 1976's Nightmares: Poems to Trouble Your Sleep (Jack Prelutsky, with illustrations by Arnold Lobel) has been back in print for a few years now and would love to take a ride in your shopping cart, too. 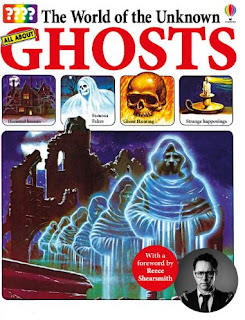