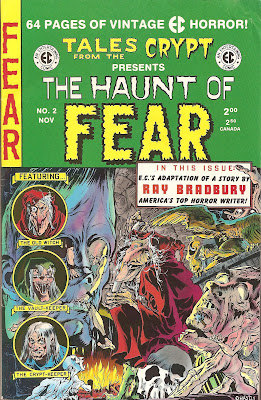 How author Ray Bradbury (Something Wicked This Way Comes, The Illustrated Man, etc.) and E.C. Comics, (publisher of Tales From the Crypt, Vault of Horror, Haunt of Fear, Weird Science, etc.) came to collaborate in the early 1950s is kind of a funny story.

When in 1952, they used elements from two previously published science fiction stories, "Kaleidoscope" and "Rocket Man", as a springboard for a "new" story, "Home To Stay", it caught the attention of the original author, Ray Bradbury.

Rather than send them a threatening letter on attorney letterhead, Bradbury wrote them a friendly (but firm) letter requesting proper royalty payment (fifty bucks!) and an invitation to contact him about adapting his other short stories. Bradbury, as it turns out, was an unapologetic E.C. comics fan, at a time when comic books carried the stigma of being trashy, low-brow entertainment.

Gaines was flattered that a successful author like Bradbury was not only an E.C. reader, but eager to have his work adapted in comic form, and the legendary partnership began. 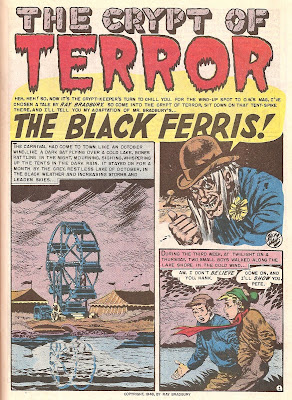 Here is the E.C. adaptation of "The Black Ferris", which appeared in The Haunt of Fear #18 (1953, illustrated by Jack Davis. These scans come from a 1991 reprint.) Jack Davis has stated he considers his work adapting Bradbury as a high point of his comics career (Bradbury, An Illustrated Life, p.106). Bradbury would later expand "The Black Ferris" into the full-length novel, "Something Wicked This Way Comes". 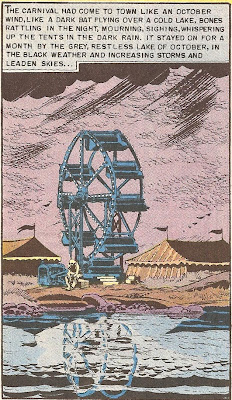 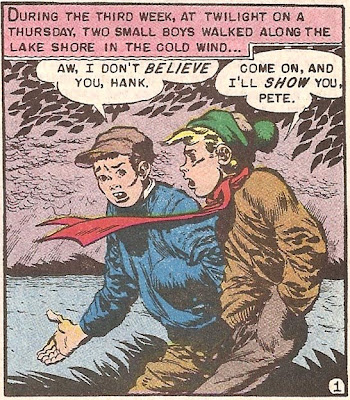 The original story "The Black Ferris" can be found in the R.L. Stine anthology Beware!

The story was also adapted for an episode of the Ray Bradbury Theater, available on DVD.

To learn more about the history of E.C. Comics, including its many collaborations with Bradbury, read Foul Play!: The Art and Artists of the Notorious 1950s E.C. Comics! The book is lavishly illustrated with tons of artwork, including stories reprinted in their entirety (unfortunately "The Black Ferris" is not one of these.)

Ray Bradbury: An Illustrated Life is an overview of Bradbury's career by way of magazine, comic and book illustrations, and includes transcripts of correspondence between Bradbury and E.C. Comics. The book is out of print as of this writing but can be had cheap on the second-hand market.
Posted by Brother Bill at 5:39 PM

What a great find. Something Wicked This Way Comes is, IMHO, Bradbury's greatest novel. It's great to see it's humble beginnings.

I am so happy to see this on your blog! I am teaching Something Wicked This Way Comes, and I went up in my parents' attic looking for my old copy of this comic (the 1991 reprint, not the original.) My comics, sadly, are all gone, but thanks to your blog, I can share "The Black Ferris" with my students.