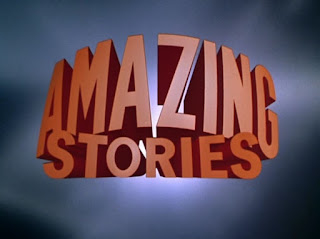 There are two words that distinguished NBC's Amazing Stories from the other sci-fi/fantasy anthology TV series that arrived in the mid-1980s (titles like The (New) Twilight Zone, Alfred Hitchcock Presents and The Ray Bradbury Theater), and those two words are:


Steven Spielberg
Of course, Spielberg got his humble start in television, directing memorable episodes of Rod Serling's Night Gallery (1969) and one of the best made-for-TV movies of all time, Duel. But this was 1985, not 1971, and Spielberg now had Jaws, Close Encounters of the Third Kind, Raiders of the Lost Ark, E.T. The Extra-Terrestrial, Twilight Zone: The Movie and Indiana Jones and the Temple of Doom on his director's resume, not to mention a producer credit on Poltergeist, The Goonies, Gremlins, and Back To the Future.

So the prospect of this Hollywood-conquering hero returning triumphant to the unworthy boob-tube was kinda sorta unbelievable.

And he wasn't doing it alone. A who's who of talent, both on-screen (Kevin Costner, John Lithgow, Patrick Swayze, Charlie Sheen, Harvey Keitel, Mark Hamill, Keifer Sutherland, Christina Applegate, Drew Barrymore, and Forest Whitaker, for starters), and behind the camera (Robert Zemeckis, Joe Dante, Clint Eastwood, Irvin Kershner, Martin Scorsese, Brad Bird, and Tobe Hooper) would be pitching in to make sure Amazing Stories was the greatest thing to grace your television screen. Ever.

Unrealistic expectations aside, Amazing Stories, it turned out, was not exactly what I was looking for in an anthology show. While technically impressive (every episode looked like a big-budget feature film), the stories were often of the treacly variety, eschewing irony for sentimentality, and straining to emulate those moments of wonder that Spielberg's films seemed to deliver effortlessly. (A July '86 TV Guide blurb suggested the show was poorly titled, since the stories were so often "banal and juvenile.")

The worst Amazing Stories episodes frequently reminded me of my least favorite segment from Twilight Zone: The Movie, which happened to be Spielberg's "Kick the Can", a saccharine fairy tale about a group of geriatrics magically transformed into children for one last romp on the playground before settling back into their comfortable aged bodies. George Miller's terrifying "Nightmare at 20,000 Feet" remake and Joe Dante's fever-dream funhouse take on "It's A Good Life" were much more my cup of Kool-Aid. 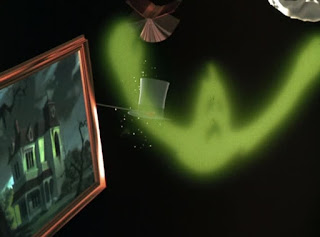 We were promised at least one haunted house and green ghost. (A still from the opening title sequence.)


I stuck it out with Amazing Stories anyway (it was 1985, after all... what else was I going to watch, Scarecrow and Mrs. King?) but definitely favored The New Twilight Zone and Alfred Hitchcock Presents. 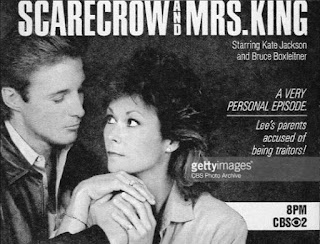 My persistence paid off halfway through the second season, when Amazing Stories delivered a genuinely frightening and unsentimental episode, Go To the Head of The Class (S2E8), that could have leapt right out of the pages of an E.C. fright comic. This special hour-long installment (episodes were normally half-hour) was directed by Robert Zemeckis, hot off the success of the original Back to the Future, and who would go on to produce a revamped Tales From the Crypt series for HBO a few years later, so it's not totally surprising that Go To the Head of The Class plays like a mash-up of those two properties. 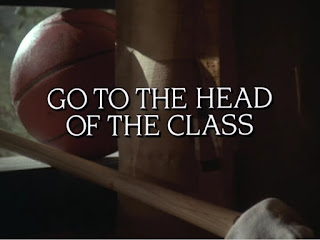 High schooler Peter Brand (Scott Coffey) has a thing for monsters (his bedroom is decorated with horror posters and toys) and for classmate Cynthia Simpson (Mary Stuart Masterson. The pair would appear on screen together again in 1987's Some Kind of Wonderful.)

But he also has a problem getting to class on time. In an opening scene reminiscent of BTTF, Peter realizes he's late for school while talking on the phone, and has to sneak into first period.

Professor B.O. Beanes (BTTF alum Christopher Lloyd) is delivering a lecture about Shakespeare, specifically MacBeth (more specifically, about how Lady MacBeth "... used sex, the promise of it, the implied threatened denial of it, to control and dominate her husband...") as Peter slips undetected into his desk across from Cynthia, who goes by the nick-name "Cyn" (get it?) and will soon be tempting Brand with the promise of forbidden fruit. 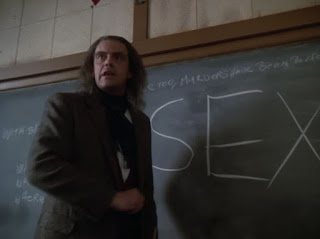 While Peter sneaks glances at the object of his desire, Beanes continues, "Men, perhaps even some in this very room, continue to say things, do things and participate in behavior they wouldn't normally dream of for the promise of sexual favor."

When Beanes reveals that Peter and Cynthia both submitted identical papers, it's Peter who takes the blame even though it's obvious Cynthia plagiarized his work without his knowledge. We are then introduced to the cruel and unusual punishment Beanes favors in the confines of his classroom, forcing Peter to stand in a stress position with a stack of heavy books in each hand, a torture he calls "Meet The Misters" (Mr. Funk, Mr. Wagnall, etc.) 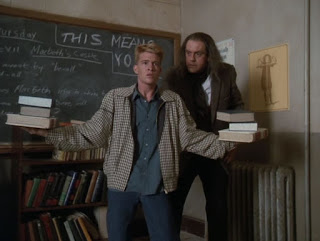 After school, Cynthia cooks up a plan with Peter to get revenge using a black magic spell that can be heard by playing the album The Last Supper by heavy metal group Blood Sausage backward (a modern alternative to the old witch's spell book, which seemed relevant, if not entirely plausible, in the era of Satanic Panic, when backwards masking and subliminal messages were believed to be hidden in rock records. The gimmick was also used in 1987's The Gate.)

The spell is said to give the victim an extreme case of hiccups that lasts several days, and has to be cast exactly at midnight. The prospect of a late night rendezvous with Cyn is too good to pass up, even if it will be in a spooky old graveyard. 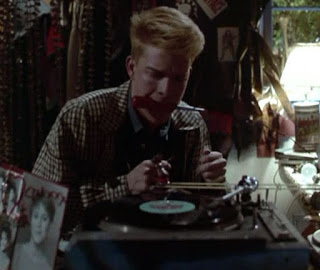 Add dirt from a grave that is freshly dug,
And the fingertip of a dead relation by blood.
This mixture ignite at the stroke of midnight,
By the united hand of woman and man.

The idea of kids trying to wield supernatural power using whatever pop-culture resources were available to them really spoke to me (I previously posted about my childhood dabbling with the dark arts trying to perform a spell depicted in the adaptation of John Bellairs' The House With A Clock In Its Walls from the TV special Once Upon a Midnight Scary). But although I fancied myself capable of casting black magic spells on my enemies and perhaps raising the dead, I never quite had the courage to sneak out my bedroom window at night.

The action moves to a wonderfully atmospheric cemetery (gnarled trees and ankle-deep mist), and after some spooky business with the pair hiding in an open grave to avoid a drunken caretaker, they break into the Beanes family crypt to prepare the potion ingredients, which include a severed bat's wing (supplied by Cyn, no questions asked), dead katydids, a graven image (a picture of Beanes from the school yearbook), rose water, the dirt from a freshly dug grave, and finally, a finger tip from a blood relative, which they procure from a reposing corpse (Ebenezer Beanes, 1854-1936) using a pair of garden shears. 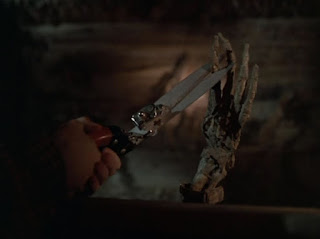 In another similarity to BTTF, this scene turns into a nail-biting race against time, punctuated by the loud clanging of a clock bell, to assemble all the elements of the spell at the precisely prescribed moment (BTTF's "weather experiment" to power a time machine with a lightning bolt was, after all, little more than magic dressed up in a scientist's lab coat.).

The spell cast, the kids check up on Mr. Beanes at his spooky mansion home, only to find him laying dead on the floor!

Luckily, the Blood Sausage album contains an anecdote spell on a track titled "The Dead Shall Rise" which promises to set things right. But in their hurry to perform the ritual, which, like the first spell, requires a yearbook photo, the couple accidentally tear the image of Beanes at the neck while adding it to the mix. 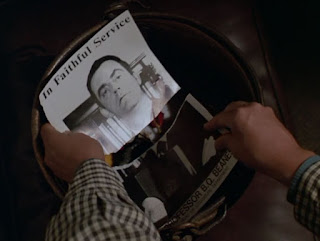 The unexpected result is that Beanes returns to life, sound in mind and body, but with the former no longer physically attached to the later. A lengthy chase scene follows that is both frightening and funny and plays like a modern take on Ichabod Crane's final flight in The Legend of Sleepy Hollow. The humor never undermines the horror of the situation, though, but adds a layer of surrealism, especially a nightmarish moment when Beanes's severed head bites onto Peter's pants leg and refuses to let go no matter how vigorously he kicks. 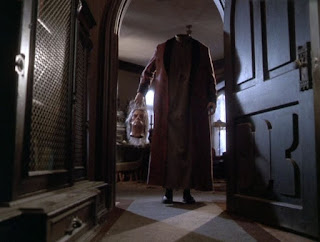 The special effects in this segment, a combination of in-camera trickery, animatronic figures (courtesy of effects guru Stan Winston) and opticals, were state of the art at the time and hold up very well today. 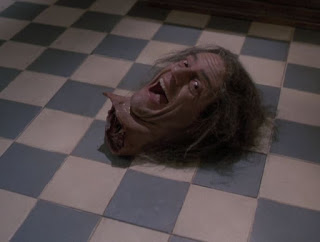 Like BTTF, the episode was filmed on the Universal Studios back lot, and as the chase spills outdoors onto the streets, the neighborhood sure looks similar to BTTF's Hill Valley (in some shots you can even see that the streets are still dressed with 1950s era automobiles, an incongruity as Go To The Head of The Class is set in present day 1986.) 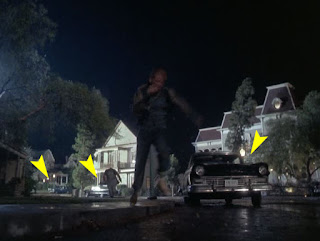 Go To the Head of The Class is available on the Amazing Stories The Complete Second Season DVD set here (it's an import release from Umbrella Entertainment, but is all-region and plays fine on U.S. equipment. All screen caps were taken from the DVD.)

While researching this article I happened upon this blog post that covers the episode thoroughly and even documents additional similarities to BTTF which I was planning to include here, so I'm just going to encourage you to read that original post instead.