*Hyperspace Used, a.k.a. The Great Father/Son Vectrex Minestorm Rivalry of 1985

Videogames were an important facet of my life back in the early 1980s (I was in grade school), and between my network of friends, I had access to all the major home systems of the day. Friend #1 had the Atari 2600 (1977), the old, reliable workhorse, a system so popular and ubiquitous that its joystick controller became a de facto symbol of the gaming industry itself.

Friend #2 had the Odyssey 2 (Magnavox, 1978), an oddball system with full-Qwerty membrane keyboard that made it superficially resemble a personal computer. Considered a lesser system due to its inferior graphics and sound (every game seemed to emit the exact same set of bleeps and bloops), it had a few notable system-specific titles such as K.C. Munchkin, a Pac-Man knock-off that was more fun than any other dot-eating maze game available on cart at the time, and Quest For The Rings, a board-game/videogame hybrid that required two players to cooperate as a team in a multi-level dungeon crawl. 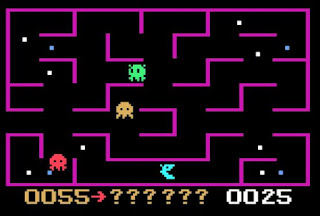 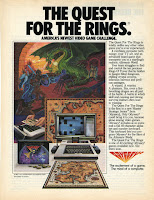 Friend #3 had the newish Colecovision (1982), which had superior graphics and licensed arcade hits like Zaxxon and Donkey Kong, as well as titles built around popular pop-culture characters like Rocky Balboa, Buck Rogers and The Smurfs.

And finally, I had the Intellivision (Mattel, 1979), viewed as the more sophisticated machine, since its name was a portmanteau of "Intelligent" and "Television". Apparently, your time spent mindlessly zapping flying saucers on the Intellivision was actually an enriching intellectual exercise. 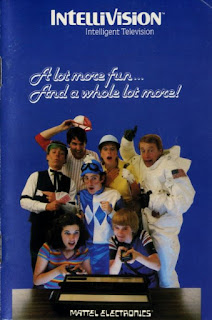 One glaring omission from my circle-of-friends system-collective was dark horse Vectrex, by Milton Bradley. Introduced in 1982 and retailing at $199,Vectrex stood unique from the other systems because it was a portable machine, and rather than hook it up to your television, had its own built-in vector-scan display.

Vector graphics were composed of rays of light that traced lines between points, rather than a bit-mapped grid of blocks. Some vector-graphics arcade games of note were Asteroids, Tempest, Battlezone and the original arcade Star Wars. The bright, clear lines of the display, similar in brilliance to those you might see on an oscilloscope screen, were very striking and had a definite futuristic science-fiction aesthetic. No other system before or since offered this unique display type (and modern arcade emulations can't quite capture the effect). 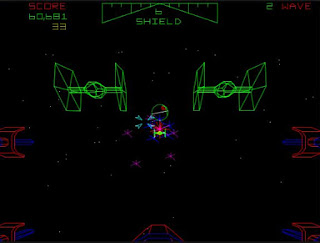 I spent enough hands-on time with the Vectrex at in-store kiosks to decide I definitely would welcome this little machine to my home, if not for the two-hundred dollar price tag (as well as the disapproval from my parents, who felt it was something akin to betrayal to add a new cartridge-slot to feed when we already had a perfectly good system at home.) 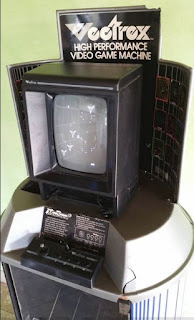 Unfortunately the Vectrex may have been too unique for its own good, as the system floundered commercially and was discontinued in 1984, with less than 30 games ever released (Atari 2600, by comparison, had hundreds of titles.) Even unique add-on peripherals like active-shutter 3D goggles and a light-pen were not enough to save the system from consumer disinterest. Vectrex systems were soon sitting on toy store clearance racks, priced at $49. This was my chance to finally grab one! 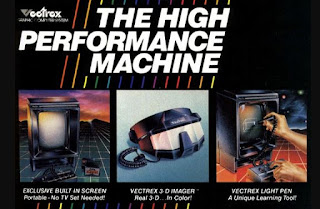 Even these genuinely cool hardware peripherals couldn't save the system.
After several months of saving every penny I could get my hands on (fifty bucks was a lot of money to a grade-schooler in 1984) I finally scrounged together enough to buy the discounted system, but with no money left over for cartridges.

That's okay, though, because Vectrex came with one built-in game, and it was, as the kids say today, a killer app. Minestorm was basically Asteroids on steroids (A-Steroids?) You piloted a space ship using rotate-left/right, thrust and "hyperspace" controls, shooting floating space "mines", which sometimes shot back or followed you around the screen.

So it was Asteroids, leveled-up. 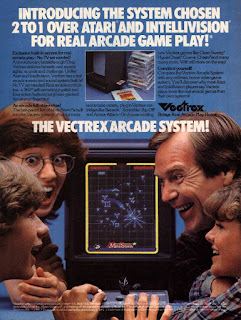 Magazine ad for Vectrex highlighted the free pack-in game Minestorm
and a very, very excited family.
The Minestorm instruction manual included a few pages to document high scores, and I started logging my steadily increasing achievements (although I never bothered recording the date when the scores were achieved.)

Today, the score record stands as an amusing account of father/son one-upmanship.

Dad, you see, was a bit of a videogamer too, and he gravitated towards the games with a simple controller layout (the joystick-only Frogger was his arcade favorite.) Initially against the Vectrex purchase (our loyal Intellivision may get jealous, was perhaps his thinking) he soon warmed up to this latest addition to the family and was adding his own personal-best Minestorm scores to the list, although with his scores barely halving mine, I was in no immediate danger of being overtaken. 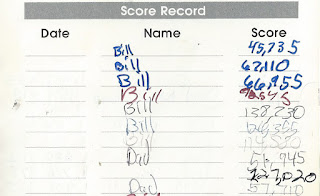 I mentioned my Dad's preference for uncomplicated controls... he could handle the ship rotation (joystick controlled), fire and thrust buttons that Minestorm required, but lacked the dexterity to include the third "hyperspace" button (the manual calls it "Escape") in his repertoire. The rare occasions he tried using the feature always ended in disaster, since he had to divert his eyes from the screen to visually locate the evasive third button on the controller before finally navigating his finger to it, always seconds too late. 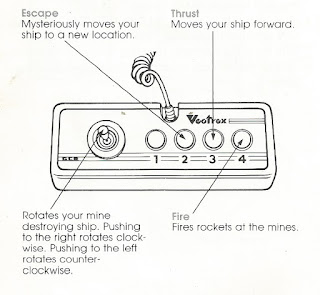 Consequently, my Dad made it a point of pride that HIS scores were achieved without using the hyperspace feature, as if this was some kind of lesser, unsportsmanlike tactic. Much like professional athletes who hold records qualified with an asterisk to denote some questionable circumstance associated with the achievement, to my Dad, my scores all bore the scarlet H... "*Hyperspace Used."

On one particularly good run, I managed to nearly triple my previous high score, achieving a then-impressive 166,958 points.

This must have lit a fire in Dad's belly, because what follows is a streak of steadily increasing scores as he chased my new record, finally topping it on 5/15/1985 (at least three months after my entry), with a score of 171,105. And Dad did not rest on his laurels, either, pushing himself harder and higher, eventually landing an unprecedented score of 218,090 two months later (7/11/1985)! 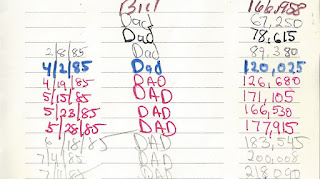 Dad, basking in high-score glory, was simply too much for my pre-teen ego to bear. Enough was, decidedly, enough.

After having semi-retired from the Minestorm scene, I quietly returned to the playfield for the sole purpose of reasserting my superior skills, and in a move worthy of videogame record-holding villain Billy Mitchell (King of Kong:A Fistful of Quarters), proceeded to rack up a previously unheard of score of 681,070, tripling-and-then-some my Dad's once proud record, and noting the achievement in the official record book with a little triple-underlined, exclamation-pointed self-aggrandizing smugness ("Bill Super Star!")

Lest there be any doubt who was currently on top...

"But you used Hyperspace!" father despaired, as his hard-won scores were dumped into the ash-bin of history... 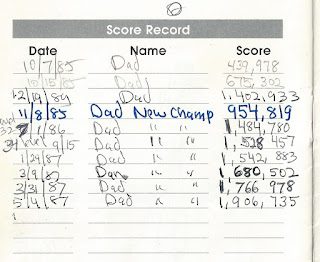 At this point, Dad was no longer competing against me--but against himself. He was on a long, personal journey of discovery.

...a journey made longer, perhaps, by not using hyperspace.

Posted by Brother Bill at 3:52 PM No comments: