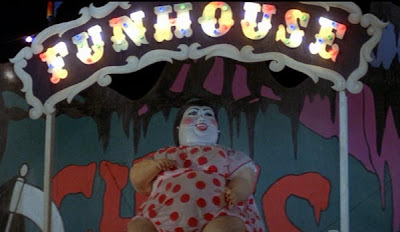 I confess... I’m a “Funhouse” apologist. Seems like “The Funhouse” (1981), (which I originally saw in an edited version on TV) takes a lot of heat, especially from fans of “The Texas Chainsaw Massacre”, who felt director Tobe Hooper had taken a huge step backwards with this admittedly mediocre little thriller.

Yes, it’s another by-the-numbers horror show featuring a group of dumb teenagers who get killed off one-by-one over the course of one night by a deformed psychopath. The four leads are forgettable, the premise (that teenagers on a double-date would decide to spend the night in the funhouse on a whim) is ridiculous, and the monster, when it comes down to it, just isn't all that scary.

So why do I always seem to find myself circling back to “The Funhouse” for one more ride?

Because what “The Funhouse” lacks in originality, it makes up for in atmosphere. Tobe Hooper obviously had a great affection for carnivals, and it shows in his attention to detail. Every aspect of the carnival depicted here is pitch-perfect, a completely believable amalgam of every element you’d ever expect or hope to find.

From the anarchy of the parking lot...

The midway games, complete with crappy prizes (sharp-eyed viewers will notice a stuffed yellow banana with eyes, recently paid homage to in the comedy Adventureland)...

...and the freak tent, with its sweaty, tireless barker promising “creatures of God, not of man...they are authentic, and they are ALIVE, ALIVE, ALIVE!”

The food court, a simple canvas awning over some picnic tables.

I love the magician, Marko the Magnificent, whose disheveled appearance and apathetic demeanor suggest a tragic backstory. He methodically performs his act, swigging from his pocket flask and ignoring a heckling and unappreciative audience.

And the palm reader, Madam Zena who claims to have performed before the crowned heads of Europe. But when her temper is tested by the giggling, disrespectful kids, she drops her phony Romanian accent and warns them “Don't come back or I'll break every bone in your body!"

Finally there’s the funhouse itself. The exterior is a grab-bag of disparate decorative elements that come together in one big glorious mess…the cackling fat lady, a pirate, a Chinese dragon, skeletons, bats and spiders, and some all-American red-white-and-blue bunting.

Rather than have custom props created specifically for the film, Hooper rented actual animated figures from Animated Display Creations, Ltd., to populate his funhouse. (An interesting article about them and their involvement with this film can be found at LaffInTheDark). I’ve ridden my share of dark rides at the local fair, and the experience was like getting whisked through a very hot, dark, storage garage full of slightly defective Halloween decorations. But Hooper gives us the perfect funhouse I always imagined and hoped for. Let's take a ride! 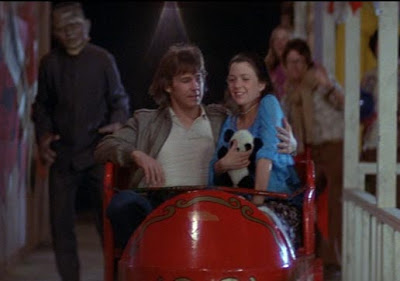 A flash of artificial lightning gives us a glimpse of several island natives and... Humpty Dumpty? 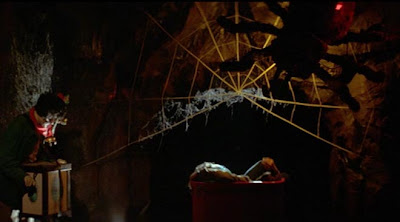 Behold, the ravages of age! 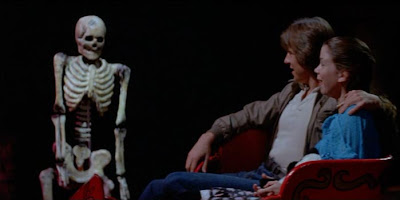 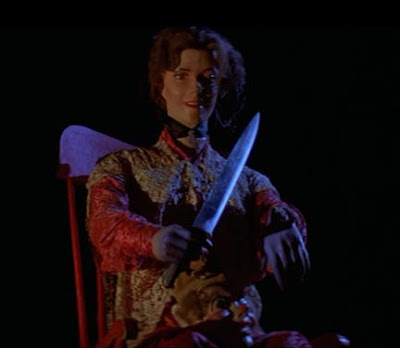 This next one is on loan from Shakey's Pizza... 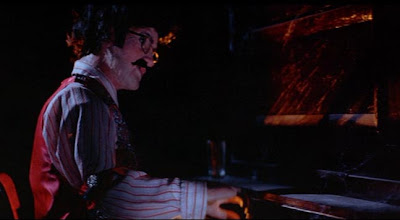 Give the monkey a coin. The monkey doesn't like pennies! 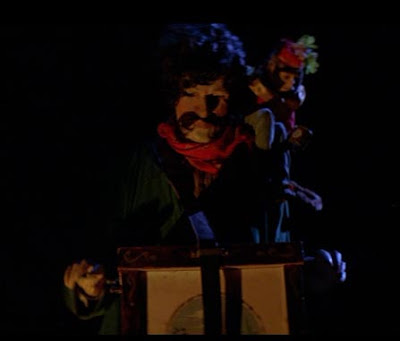 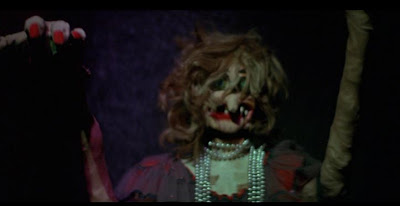 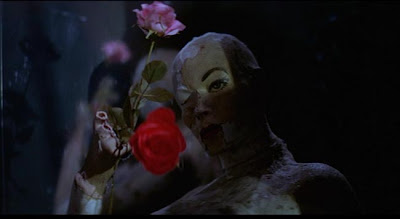 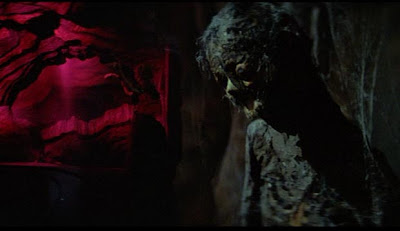 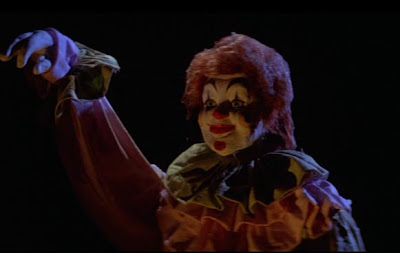 dude, this post just scared the crap out of me, lol. Nice.

Marko the Magnificent was played by William "Phantom of the Paradise" Finley!

The Funhouse is indeed an unsung gem that scared me on TV as a kid. Tobe Hooper is a master of atmosphere, even his crappiest movies have that going for them. Great screen caps!