The Haunted Closet blog started with a book... Baleful Beasts and Eerie Creatures, and over the years several of my favorite out-of-print-good-luck-finding-a-copy-on-Ebay selections have since followed.

But for some time I've been meaning to do a post on newly published books that have found their way into my library. In fact, I've been "meaning to" for so long, some of these "new" books are several years old already (sad foghorn). But that's only a few minutes in Haunted Closet years. The important thing is these titles are relatively new releases that are still in print, so should be readily available to order.

And since I can't seem to mention ordering books without flashing back to my elementary school Scholastic Book Club, I'm presenting this month's selections as they might appear in a children's book club catalog.

Ladies and gentlemen, allow me to introduce the first installment of... the SKULLastic Book Club (ooh boy, am I good or what?) 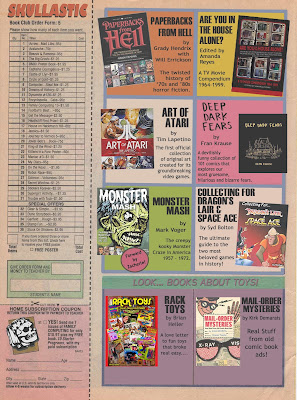 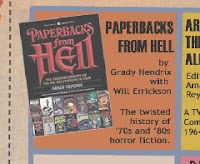 Paperbacks from Hell (Grady Hendrix with Will Errickson, 2017)

One category of horror media on which I'm embarrassingly unversed is the "drugstore paperback", those provocatively-titled tomes whose covers used to proposition me, in all their full-color embossed glory, from across the 10-items-or-less checkout line. In fact, outside a few Stephen King titles, only one book of this pedigree every successfully completed the passage from carousel rack to shopping cart: Rick Hautala's Night Stone (1986)-- and that was only because the nifty 3-D skull hologram on the cover commanded me to buy it.

That hologram cover gimmick was, it turns out, an industry-first, according to Paperbacks From Hell (Grady Hendrix, 2017). In fact, there are so many nuggets of information about 70s and 80s horror fiction crammed between its pages that I can confidently fake some level of expertise on the topic the next time it comes up at the office happy hour that I never go to.

Paperbacks... kicks off with an origin story of the horror fiction phenomenon's humble beginnings as an attempt to capitalize on the lingering popularity of older gothic romance novels, before launching into plot summaries, author and artist profiles, and musings on how political and cultural shifts of the day were reflected in their lurid pages (from haunted-house-as-housing-crisis-metaphor to pagan-cult-as-urban-decay-anxiety). The chapters are divided by plot device, with Satan worship, murderous children, mutant animals and more getting their turn in the spotlight.

But Paperbacks... also functions as an art book, with full-color illustrated covers reproduced on every page. Will Errickson of Too Much Horror Fiction provides a recommended reading strategy in the afterword. 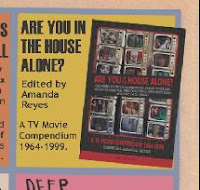 Are You In The House Alone is a love letter to that most unusual hybrid, the television movie. You'll find here essays on the medium from various contributors (editor is Amanda Reyes, of Made For TV Mayhem) but the meat of this book is the over 200 pages of micro-reviews, organized by era (the years 1964-1999 are covered), with a separate section reserved for Stephen King adaptations.

Being a killjoy, I naturally skipped right to the index first to see if they remembered to include my pet obscure TV movie, 1985's Final Jeopardy. They didn't. But I'm not going to complain about getting only one puppy for Christmas, because literally all my other favorite TV films get coverage here, including King adaptations Salem's Lot and It, true crime dramatizations Helter Skelter, The Legend of Lizzie Bordon and Guyana Tragedy: The Jim Jones Story, disturbing creepers Bad Ronald and Born Innocent, supernatural thrillers Baffled!, Don't Go To Sleep, Dark Night of the Scarecrow and This House Possessed, monster movies The Bermuda Depths, Gargoyles, Killdozer, Don't Be Afraid of the Dark, The Last Dinosaur and Snowbeast, Satanic scare films Devil Dog: Hound of Hell, The Initiation of Sarah, Horror at 37,000 Feet and Satan's School For Girls, early Spielberg works Something Evil and Duel, slasheresques Home For The Holidays and John Carpenter's Someone's Watching Me, the Kolchak series predecessors The Night Stalker and The Night Strangler, and Dan Curtis anthologies Trilogy of Terror and Dead of Night.

And for every one of those, there are a dozen entries for films that were completely unknown to me and have now been added to my ridiculously ambitious "watch list". This is a book you'll read at least once for pleasure, and then want to keep at hand for reference. 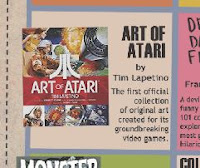 This is how art books should be done. A heavy hardback with beautiful full color layouts on every thick glossy page, this magnificent brick of a book showcases the promotional and package art that launched a thousand ROM cartridges in the 1970s and 80s.

Early home video game graphics were often simplistic and crude thanks to the hardware limitations of the era, so the packaging art was not merely a marketing tool, but served as an extension of the game playing experience itself, priming the players' imagination with rich renderings of the characters and environments they would encounter as a mere grid of cubes on their TV screens. 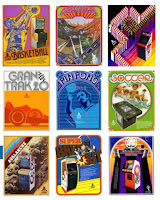 Consoles, peripherals, and unreleased hardware prototypes are also presented here for your aesthetic consideration. But Art of Atari is not a mere picture book. The history of the Atari company is told here, one cartridge box at a time, along with artist bios, and peppered throughout with interesting bits of trivia (like the fact that the only reason a chess game was released for the Atari 2600, a system woefully inadequate for such a demanding piece of programming, was due to a threatened lawsuit prompted by the appearance of a chess piece graphic on the original system box art.) 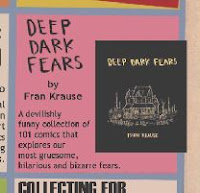 I had not heard of Fran Krause or the website that inspired this kinda cute, kinda creepy book of comic strips depicting various phobias, anxieties and nightmares collected from his readers, but after reading Deep Dark Fears, I'm looking forward to the follow up volume. Some are funny, others resemble ghost stories or urban legends, and many tap into that collective Jungian swamp of shared nightmare tropes that have haunted us all at one time or another (teeth falling out, sudden nudity in public, etc.) 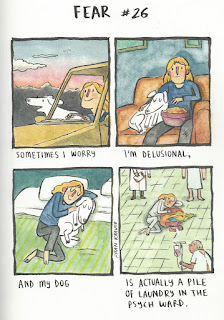 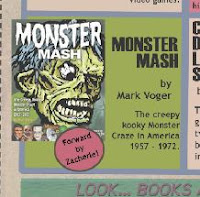 I should add that the photo of the author as a child dressed as Dark Shadows vampire Barnabas Collins is adorable. 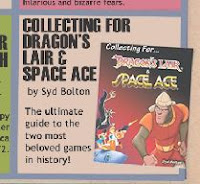 I've previously expressed my love for the Don Bluth animated laserdisc games Dragon's Lair and Space Ace (you can add Dragon's Lair 2: Time Warp to that list as well, although having been released years later when video arcades were on the decline, it's the machine I've spent the least amount of time on).

To me, these games represented a cosmic merging of two great loves, video games and Disney animation (Bluth was a former Disney animator who left to form his own studio in the early 80s due to concerns about quality standards at the house of mouse).

Collecting Dragon's Lair & Space Ace catalogs every arcade cabinet variation, home system adaptation, promotional item, magazine cover and toy relating to Dragon's Lair and Space Ace. Save a few very rare items, everything is pictured in full color photographs. Most fascinating to me are the early computer adaptations that employed considerable artistic license in interpreting the unique motion-picture style game play on puny 8-bit and 16-bit systems that still relied on magnetic media (it wasn't until the early 90s, when CD-ROM technology started to become commonplace, that the home versions actually began to resemble their arcade inspiration.)

This book runs a little pricey but is a must have for any Don Bluth fan. 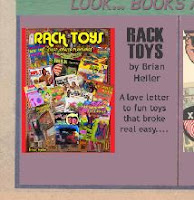 There are plenty of books out there for toy collectors, but this is the only one focusing on those inexpensive, poorly-made pieces of junk that were found exclusively in what passed for the toy department at your neighborhood grocery store, pharmacy or gas station.

Rack Toys (by Brian Heller, of Plaid Stallions) is a celebration of those wonderful blister-packed bits of molded rubber and plastic from the 1970s and 80s that never seemed to turn down a branding opportunity, no matter how outlandish. It's almost as if the head of marketing picked a random licensed property from one hat and a toy from the other and demanded his staff to "make it work." 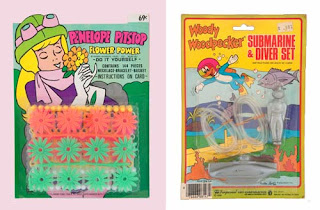 But you'll be too charmed by the full color photographs of these toys and their packaging to question the logic of a Popeye grooming kit, Rocky Balboa bubble-blowing set, Space 1999 water gun, Star Trek silly putty, Planet of the Apes stunt motorcycle, Spider Man bowling game, or parachuting Incredible Hulk doll.

There's even a chapter reserved for "knock off" toys that couldn't quite land the licensing agreement so just cranked out generic imitations (e.g. "Astro Ape", a doll clearly modeled after Planet of the Apes, and a "Star Fleet" space communicator that boldly goes where no officially licensed product has gone before.)

While still in print, I've found this book is sometimes unavailable at Amazon, so you might want to just go straight to the Plaid Stallions store instead. 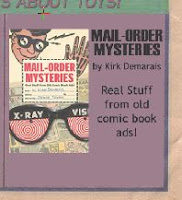 
In third grade, some friends and I conspired to order a set of pellet guns we saw advertised in the pages of a comic book. Really fires! 50 pellets included! Realistic gun action and sound! Convinced our parents wouldn't approve of us receiving dangerous firearms in the mail, we swore an oath of secrecy as we made an on-foot pilgrimage to the corner 7-11 to buy a money order (even at that young age we knew not to send cash in the mail!) and arranged to have the weapons delivered to a drop-house (i.e. a friend whose parents weren't as attentive as ours and less likely to intercept the package.)

Six to eight weeks later we took delivery of three plastic "old West" looking six-shooters and 150 white pellets that resembled Tic-Tacs. These were not the deadly pump-powered air guns we were hoping for. They were, in fact, rubber-band "powered", and if you took careful aim and held the gun level, the plastic Tic-Tac would skim out the end of the barrel with all the force of a finger flick.

It wasn't quite Stand By Me, but a little innocence was lost in that amusing episode from childhood, and it taught me to be skeptical of any deal that seemed too good to true. 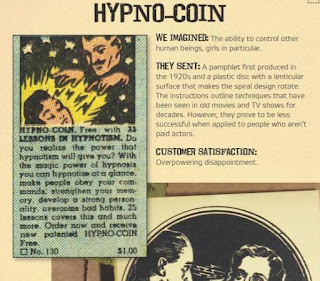 If that was all there was, the book would warrant purchase. But Mail-Order Mysteries ups its game considerably by also presenting the actual items themselves alongside their respective ads, accompanied by the author's humorous color commentary (on the plastic soldier 'flat' figurines, Demarais observes they "lacked one of the three dimensions we typically look for in a toy.")

If you've ever wondered what exactly those "X-ray specs" were all about, or how they could possibly ship to your home a working nuclear submarine "big enough for two kids" for $6.98, this is a peek behind that curtain.

Special Offer! Order any 3 books and receive a free poster! 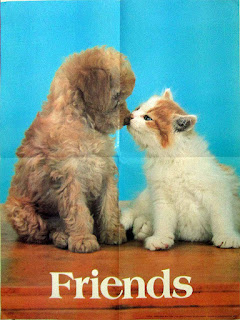 (book club order form graphics and poster were found at Branded In the 80s. Set aside a few days and take a look.)
Posted by Brother Bill at 7:59 PM 3 comments: