"Girl in Gold Boots" (1968) tells the story of a typical small-town girl who heads off to the big city (Hollywood) to pursue fame and fortune, only to be lured into a seedy underworld of crime, drugs, and go-go dancing.

And as you can see by the silhouettes in the bottom right, it was. 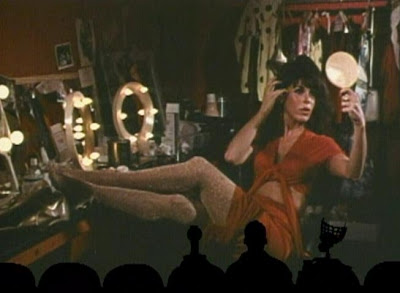 While the adventures of waitress-turned-exotic-dancer Michelle (not too exotic...the bikini stays on in this picture!), leather-jacketed hoodlum Buzz, and guitar-toting drifter "Critter" aren't terribly interesting, the trio's first stop when they arrive on Hollywood Blvd. is... the "Haunted House". 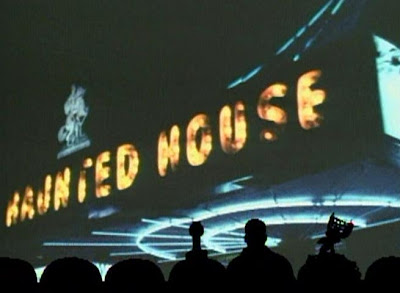 This is a hip and swinging night club, not a Halloween attraction. The exterior may be covered with spiderwebs--but they're neon! Toss in the rock stylings of Kent and the Candidates and it sounds like they're in for one scary evening. 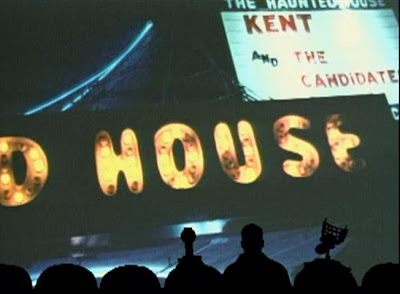 Don't bother looking for a parking spot. This is a classy joint with valet parking. 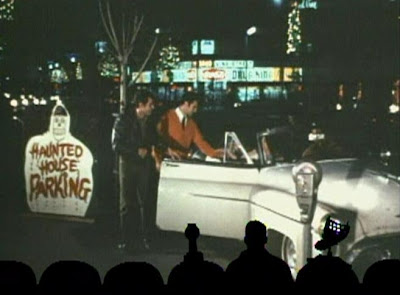 Come right on in. There's no cover charge. 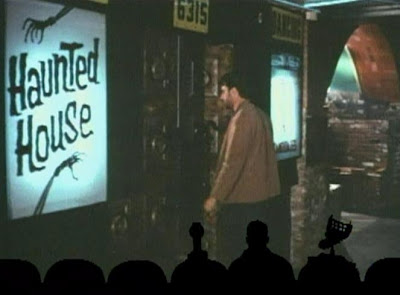 Our three protagonists are so overwhelmed by the scene that they don't even notice the fake stalactite. 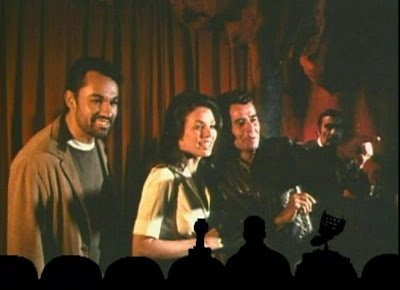 The main stage is in the mouth of a demonic head. Plenty of girls in gold boots down there! 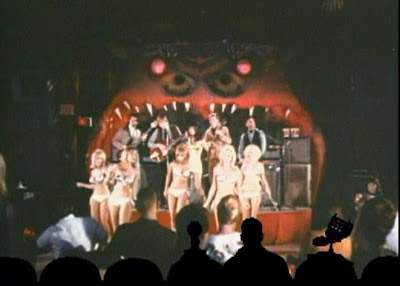 The show starts out slow but picks up steam...literally. It shoots out of the demon's nostrils occasionally for dramatic effect. 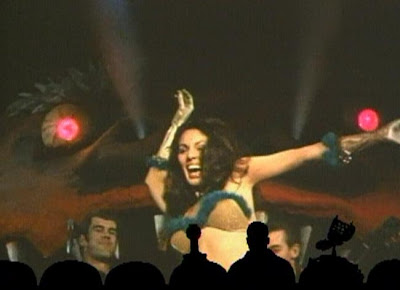 Here's how it looks from the audience. 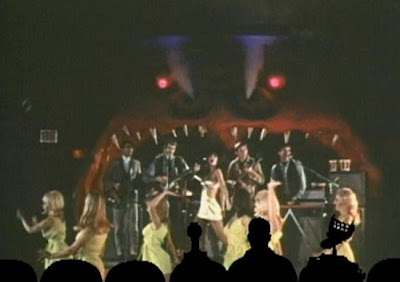 Between sets, the stage becomes a lively dance floor. 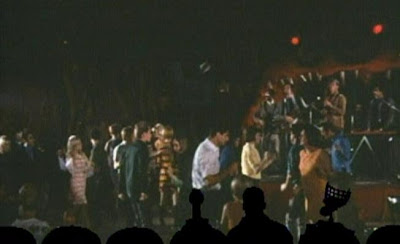 And the wild decor isn't contained on stage. The walls are painted to invoke the cavernous catacombs of Hades itself. 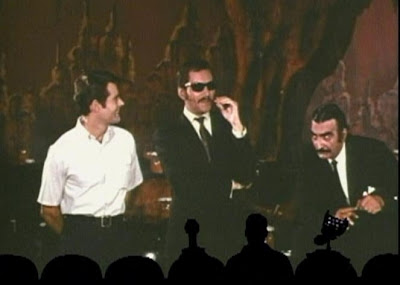 Overhead is a ghoulish chandelier decorated with skulls. 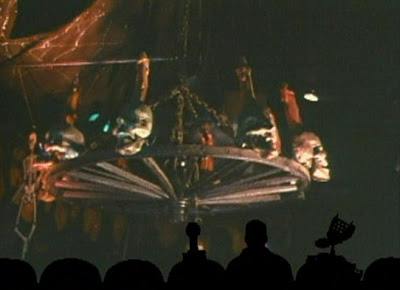 And above that, you'll find an animated figure that appears to be sawing the chandelier's chain! 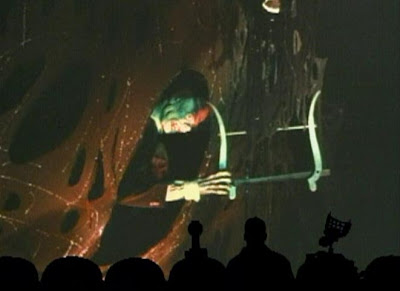 A tortured skeleton hangs nearby. 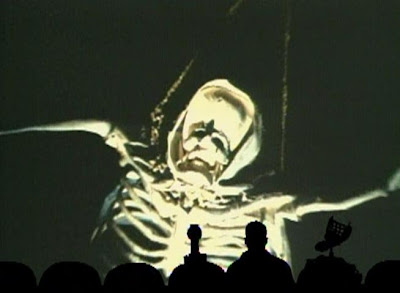 I suspected the Haunted House club had to be an existing location. There was no way there was going to be any set-building for this low-budget affair. My suspicions were confirmed during the end credits, where the club is called out. 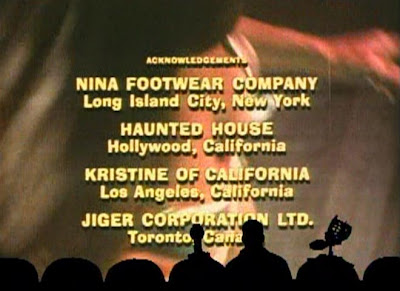 I haven't had much luck finding any information about The Haunted House, other than that it stood at 6315 Hollywood Blvd. as early as 1966 (it is mentioned in the liner notes of Frank Zappa's 1966 album "Freak Out".) The club also features prominently in 1967's It's A Bikini World, where it operates under the name "The Dungeon" and is managed by a young Sid Haig playing a hot-rodder named "Daddy" (clearly modeled after real-life 60s custom culture icon Ed "Big Daddy" Roth.

Bikini World gives us glimpses of some other decor, like this suspended bat... 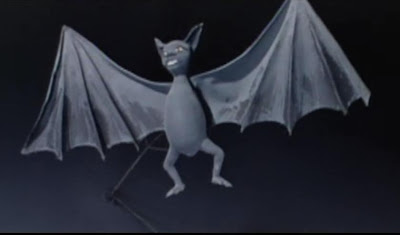 ...as well as complete "live" performances (they appear lip-synched to me) by then A-listers The Animals, The Castaways, and others.

The club also earned a spot in a montage of Hollywood nightspots in the 1968 strip-sploitation film A Sweet Sickness. 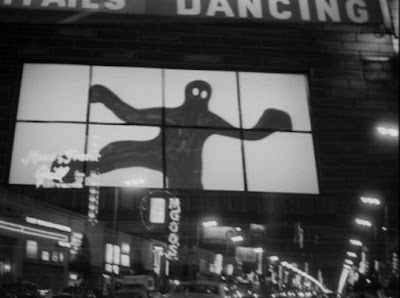 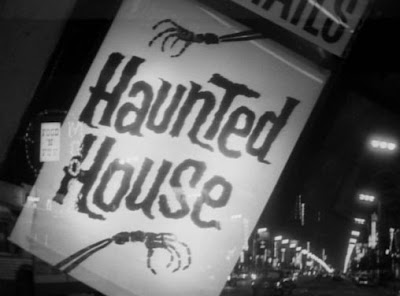 Girl in Gold Boots has seen a few releases to DVD. You can also see it as it appeared on Mystery Science Theater 3000 here. It's a Bikini World has not been released to DVD but can be found streaming on Netflix as of this writing. A Sweet Sickness can be found as the supporting feature on the DVD for A Smell of Honey, A Swallow of Brine.
Posted by Brother Bill at 4:42 PM

6315 Hollywood is around Hollywood and Vine - near a tatoo shop and The Cave adult joint. (I used to live around the corner)

I saw this movie a few years ago on TV, but didn't recognize any of that facade from the area. Must have been altered over the years.

Thanks for sharing. I am definately going to check out the MST 3000 version.

The same club is still around and they do events there, thanks to Baron Shivers of The Ghastly Ones.
http://www.myspace.com/hauntedhouseaugogo

Ah...it's in downtown now at Club Bordello. Never been - bet it's fun!

Ormon,
Thanks for posting that link. I'm a Ghastly Ones fan (and The Bomboras/Finks as well, some of whose members make up The Lords of Altamont).

I should note for clarification that their themed events aren't being held at the same location as the original club... but it sure looks like a good time!

I believe the old Haunted House is now The Cave. You can read a little bit more about the Haunted House in Domenic Priore's book Riot On Sunset Strip. It was one of the hang out that the riots started over.

my dad was the owner of the haunted house.his name was mickey crouch.he died oct 14 2008.im his son christopher i know all about this night club.up stairs in the club was a judo studio.that bruce lee used to come to.to contact me chriscrouchdrums@yahoo.com or 818-271-0249.

Chris , I AM fascinated by your fathers club!!

I walked into that joint by mistake when I was a little kid and I was thrilled! I never saw anything like it. I thought it was the real 'Batcave' from the TV show. My dad led me out of there right away!

Yes, but what about Eat? I'm going nuts trying to dig that joint up.

Good to see the old place again. Im Tommy Poole: leader, bass player, & singer for "Tender Lovin Care" Who played there of & on in the early to middle 70s.

I spent many nights there dancing the night away in the late 60s! Lots of great memories! Loved the house band, "The Real Thing" and enjoyed the main attractions there at times like Ike and Tina Turner.