Don't Be Afraid of the Dark, Bad Ronald, and my crappy comic

When I bought my first DVD player almost exactly 10 years ago, I made a big list of all the movies that I was interested in owning but were not yet available in the shiny new format, encompassing everything from the mainstream (Star Wars...duh) to the obscure (Russ Meyer's Motorpsycho).

Over that past decade, as my DVD collection has piled higher, the once massive list has dwindled down. Of the horror and sci-fi titles on my list still yet to be officially released to DVD are Willard (1971), You'll Like My Mother (1972), The Power (1968), Two On a Guillotine (1965), The Green Slime (1968), Wicked/Wicked (1973), the animated The Phantom Tollbooth (1970), and made-for-TV movies Final Jeopardy (1985), Dark Night of the Scarecrow (1981--announced for DVD several months ago but apparently delayed) and Steven Spielberg's Something Evil (1972).

UPDATE 10/10/10: The Power and Two On A Guillotine are now available from the Warner Archive, and the Dark Night of the Scarecrow release finally happened.

There were two other made-for-TV titles on that list until very recently, films from the 1970s that I somehow managed to miss, but would hear spoken of in a reverent tone by friends that had seen one or the other as children and still carried the mark with them into adulthood... Don't Be Afraid of the Dark (1973) and Bad Ronald (1974). 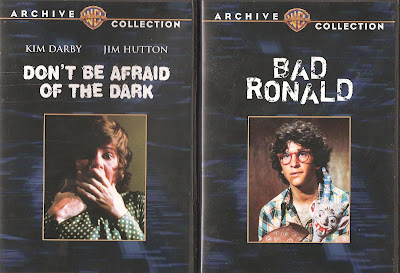 Both titles were recently made available through Warner Archives burn-on-demand program, through which the studio is releasing older and obscure titles that are manufactured as ordered, via their website.

Unfortunately both discs are rendered in a format that makes them unplayable on PCs, so I'm unable to provide screen shots from either film. So instead, I'm going to supplement this post with scans from the crappy comic book I wrote with a friend in 4th grade, early 1980s. 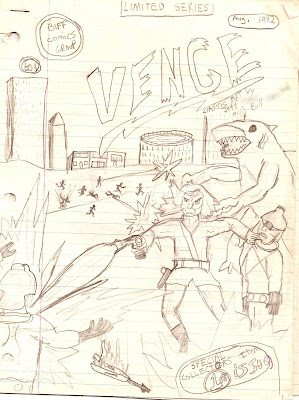 By 4th Grade, writing partner and best friend J--- and I had many unfinished and abandoned projects under our belt, so we were determined to actually FINISH this comic book no matter what, even if that meant sacrificing niceties like clean artwork, legible lettering and a story that made sense. We cranked this thing out over the course of one sleepover, working continuously throughout the night and into the early morning.

In Don't Be Afraid of the Dark, married couple Sally (Kim Darby) and Alex (Jim Hutton) move into a house inherited from Sally's grandmother. Sally seems to be having some insecurity issues, as her husband's attention is dominated by work matters and not with her. After she opens a sealed ash door in a basement fireplace while puttering around the new house, she starts hearing and seeing little demons scurrying about in every shadowy nook and behind every swaying curtain flap. 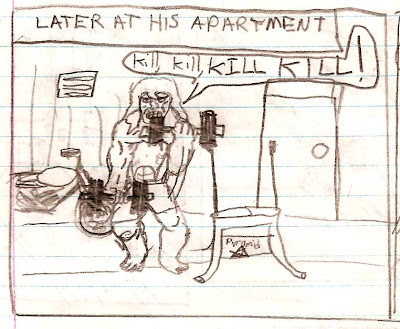 J--- got to design the hero. He was a superhero fan, but he was also into vigilante-type tough guys like those portrayed by Sylvestor Stallone or Chuck Norris, so he came up with "Venge", a street-smart, mullet-headed martial arts expert who prepares for a busy day fighting street crime by pumping iron and hissing "Kill! Kill! Kill!" through clenched teeth. Note the motorcycle parked in his home gym.

We don't get a good look at them right away, but they whisper sinister things to Sally, like "We want you! We want you!", tug on her clothes, and knock over furniture. They reminded me somewhat of the Zuni fetish doll of Trilogy of Terror or the gremlin in the final chapter of Cat's Eye. 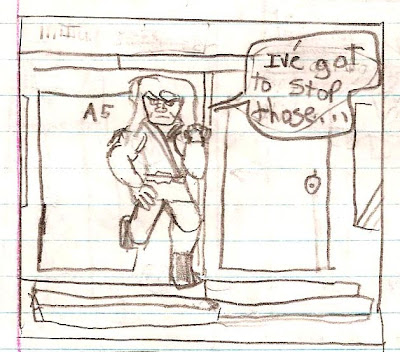 As we follow Venge onto the streets of mean, we see that he lives not in some elaborate hidden headquarters, but a humble apartment.

Now you might assume the demons haunting poor neglected Sally must be of the psychological nature... they represent her own insecurity and conflicted feelings about her marriage, and she will either fight them and overcome her personal issues, or be consumed by them. 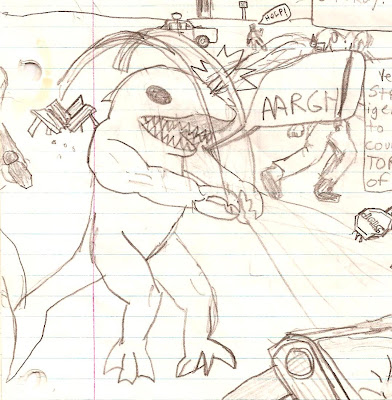 J--- designed the hero, so I got to design the enemy. As you could guess, I was into monsters, fantasy, and science fiction. So what sort of antagonist did I dream up for our gritty urban soldier of the street? A shark man with crab claws, naturally, who has risen up from the ocean depths to wreak havoc on the big city. His name is Tor, a name I stole from a Halloween mask I saw advertised of B-movie actor Tor Johnson.

Nope! These are actual little creatures, that really were let free from the fireplace, where they've resided for at least 20 years for reasons that never get explained. They speak English, are smart enough to use tools (like a key to unlock a door, or a hanger to reach a high light switch), and even have arrived at some kind of undertanding with the property's longtime handyman, who knows about them but has been sworn to secrecy. 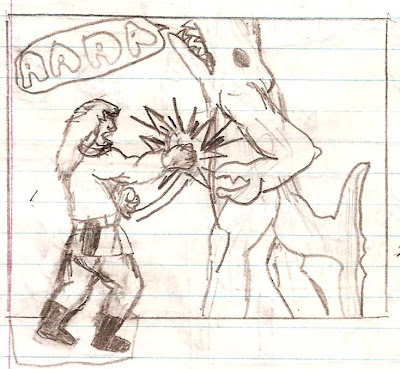 Every so often my Dad would pop his head in to offer bits of advice. Advice like using white paper instead of ruled, using a ruler to draw the frames, planning the page layouts in advance, etc. We knew that was exactly the kind of thing that would sidetrack us and prevent us from getting the thing done, so all suggestions were noted, and ignored.

The creatures even seem to be operating under some kind of ritualistic protocol. In one scene they sneak up on Sally while she showers. One of the demons, wielding Alex's straight-razor, announces that it wants to kill her. But another demon cautions that they must wait and kill her tomorrow in her bed (why?), but it would be okay just to scare her now (again, why?) The entire film operates on a kind of child's story logic, where events happen for no rational reason, like a ghost story being improvised around a campfire. 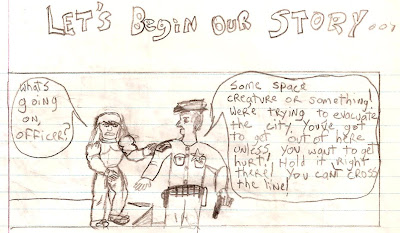 To spread the work (and fun!) equally, we would each draw elements for every frame. But this lead to some problems when characters J--- drew wouldn't quite cooperate with those that I drew. Take this frame. J--- drew Venge first, and then I added the cop he's talking to, but as you can see my cop is drawn completely out of scale to our hero, who now appears to be a midget hovering in mid-air. I fixed the hovering by drawing an elevated step for him to stand on...but he's still a midget!

If Don't Be Afraid... is a children's campfire ghost story, Bad Ronald strikes me as a nightmarish modern take on a Grimm's fairytale. 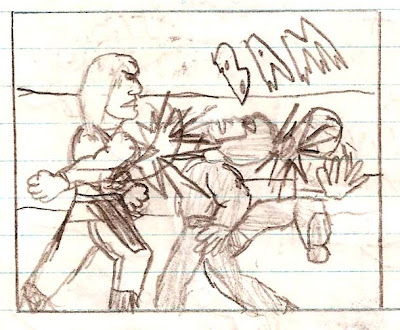 Here's another problem of scale. Just how tall is that second goon taking it in the face?

Once upon a time there was a young man named Ronald (Scott Jacoby), who lived alone with his loving mother Elaine (Kim Hunter) in a little cottage. Ronald was a gentle boy who loved his mother dearly, but he had trouble fitting in with the rest of the young folks in his village.

Admittedly, neither of us had much understanding of the comic medium, but we did know two things... comic book readers don't pay attention to spelling, and mysterious bad guys named Mr. X always appear in silhouette to hide their identity until a big reveal in some later issue.

Ronald was walking along a path one day when he came across a little girl, who called him names. It turns out Ronald wasn't so gentle after all, because he pushed the little girl so hard she hit her head on the ground and died! 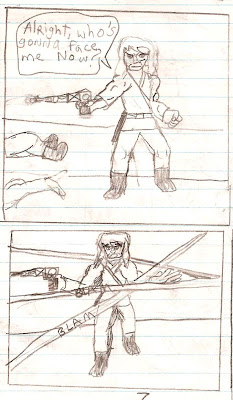 We also knew that a comic book can't be all gunfire and thrust-kicks. The action has to be broken up with little bits of comic relief. Even if that comic relief involves gunfire.

When mother found out what he'd done, she knew it wouldn't be long before all the King's men came to take Ronald away. But she had an idea... they would seal up the entrance to one of the bathrooms, completely disguising it so it looked just like an ordinary wall, then make a small, secret entrance behind the pantry that let into the back of the now hidden bathroom. Ronald would live in this secret lair until they were able to move to another land far, far away.

Here's some more comic relief, where we playfully suggest Venge might let this triumph go to his head. And no, those aren't Tor's smoking nipples. That's laser blast damage.


Ronald adapts to this new living arrangement quickly, but the situation is further complicated when his ailing mother leaves to have an operation and doesn't return. After weeks of living alone, a realtor begins showing up, giving tours of the home to prospective buyers. Ronald continues to live concealed in his secret hideout, his appearance becoming increasingly unkempt and his psychological state increasingly disconnected from reality. 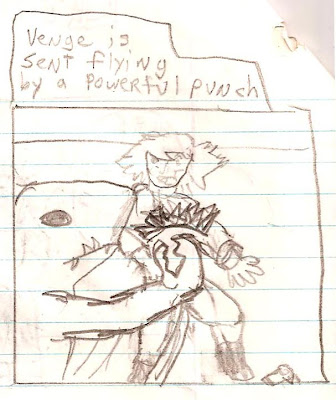 J--- and I didn't always see eye-to-eye. I thought the action sequences should speak for themselves, but J--- wanted to add narrative boxes to explain the action and give the reader something to actually read. The next morning, groggy from working all night, I relented. Here's one of the controversial narration boxes J--- added after the fact.

Eventually a family moves in with three golden-haired daughters, all completely unaware that a big bad wolf is living on the other side of their walls. It's only a matter of time before Ronald reveals himself to those that have been sitting in his chair, eating his porridge and sleeping in his bed.

Bad Ronald succeeds in being absolutely unpredictable (I really had no idea where this story was going at any time) and thoroughly creepy. If Don't Be Afraid... had you double-taking at every shadow in your peripheral vision, Bad Ronald will have you listening at your walls and looking for peepholes. 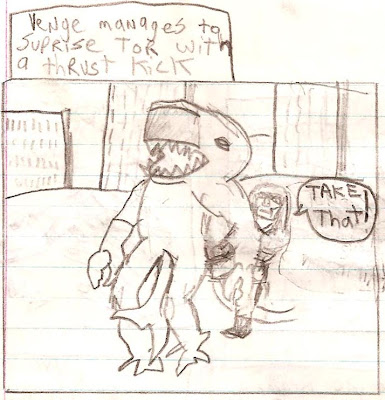 Another redundant piece of narration, followed by superfluous dialogue. Aren't we just pandering at this point?

I recommend both films, with Bad Ronald being my definite favorite (although I must warn that both films suffer from the usual weaknesses associated with most made-for-TV movies...some cringe-worthy performances, awkward dialogue and stilted pacing).

J--- also felt Venge would be more endearing if he spouted wisecracks while he busted chops. This dialogue was squeezed into the existing frame the morning after.

Also I should warn that both DVDs appear to be transfers from video masters, so the quality is poor, and there are no extras. 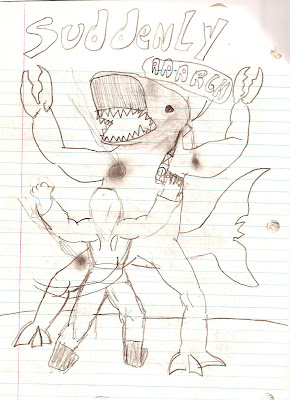 In fact our arguments about how the comic had turned out got so heated, that we ended up tossing the barely completed book into the trash the following day. I later regretted this rash decision, and secretly rescued it.

1. I L-O-V-E the artwork in this post so much I almost fell off my chair at my job.

2. Did Warners do anything in terms of color correction or remastering either of these two chestnuts, or is it like watching an old VHS copy on DVD?

Yes, those DVDs look pretty much like an old VHS copy. No remastering. They aren't even close-captioned.

Thanks for stopping by!

"Don't be Afraid of the Dark" scared the shit out of me when I saw it when it aired for the first time on ABC. Love the artwork!

Turner Classic Movies played Wicked, Wicked a few months back. Can't say I was blown away, but it had its moments.

I admit, I enjoy a lot of movies that are mediocre or outright bad. In the case of Wicked/Wicked, I love the novelty of the split-screen, the cheesy title song, and the fact that its filmed at the historic Hotel Del Coronado, where I've stayed on occassion.