While I never felt The (New) Twilight Zone (1985-1989) ever reached the heights of the original, I watched it faithfully each week, and some episodes stayed with me into adulthood. 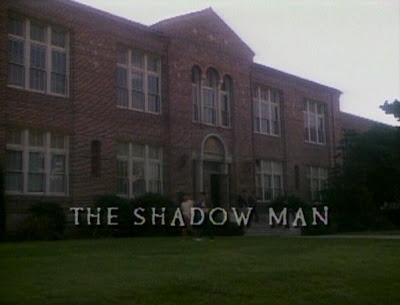 "The Shadow Man", for example. Directed by Joe Dante (Gremlins, Matinee), its a short and shivery little spook yarn in the tradition of those classic tales told 'round the campfire (like the ones I previously posted here.) 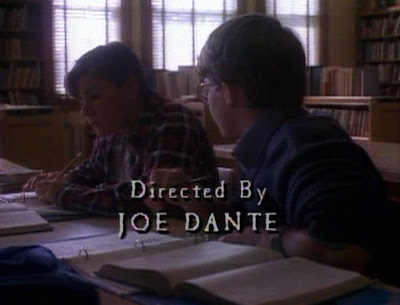 Despite being thirteen-years old, Danny Hayes (Jonathan Ward) is still afraid of the dark and can't go to sleep without the lights on. 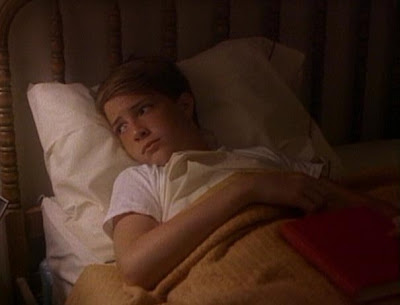 When his Mom finally insists on turning off his bedroom lights after scolding him for clinging to childhood fears he should have long outgrown, we find those fears aren't entirely unfounded. 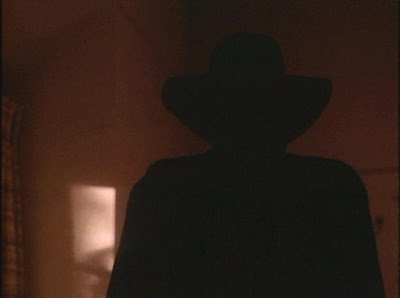 Something rises up from under his bed: the tall, thin silhouette of a mysterious figure. Danny is terrified by the ominous spectre towering at the edge of his bed, who introduces himself in a raspy voice: 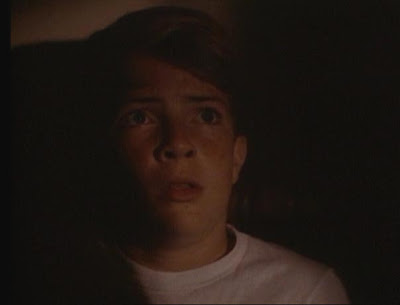 With that, he turns and hovers quietly out the bedroom window. 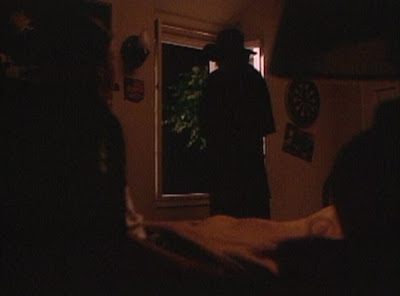 Danny is so frightened he abandons his room for the living room couch. We'll learn later, when he relays the story to his best friend Peter (Michael Rich), that he heard the ominous Shadow Man return to his room just before dawn.

Peter isn't convinced Danny's "Shadow Man" is anything more than the product of an overactive imagination. But at school that morning, there is talk of a dark, thin stranger that attacked two kids in the park overnight. 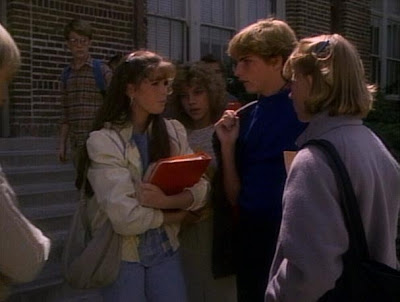 The following evening, the thing appears again, rising up from beneath his bed, and reciting: 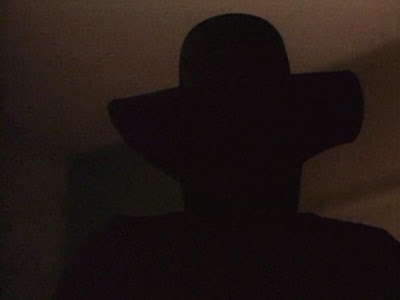 ..before slipping eerily out the window. This time Danny is armed with a camera to capture the evidence, but the flash fails and his photos are useless. 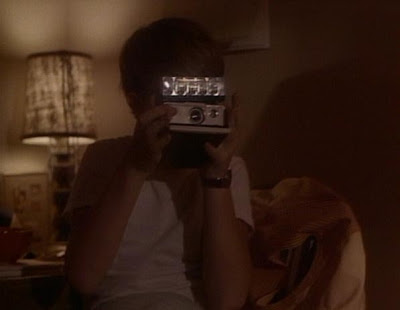 A week passes and the dark stranger who has continued to terrorize children that dare to be caught outside after dark has become the talk of the school. 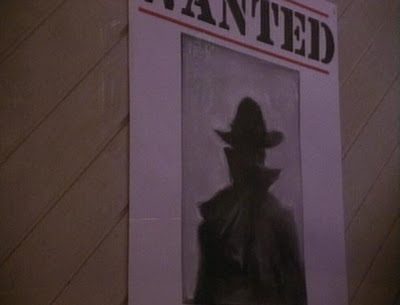 At this point, Danny is starting to get accustomed to his unusual roommate, even daring to ask him one evening, as he makes his way out the window, "You'll never hurt me, right? Promise?" 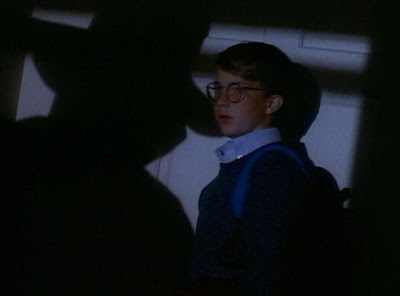 To which the Shadow Man repeats:

When the bully Eric (Jason Presson), picks a fight with him at the local burger joint, Danny, hoping to impress a girl and perhaps put an end to Eric once and for all, challenges Eric to fight him later that night, at the park where the murdering maniac has been seen the most. Eric, not wanting to look cowardly in front of the other kids, agrees. 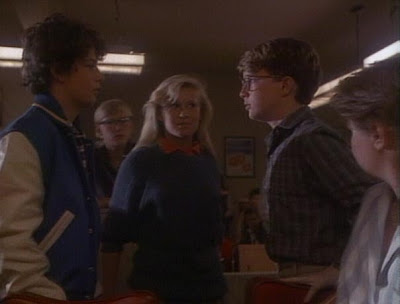 That night Danny waits until the Shadow Man makes his nightly exit, then heads to the park for his rendezvous. 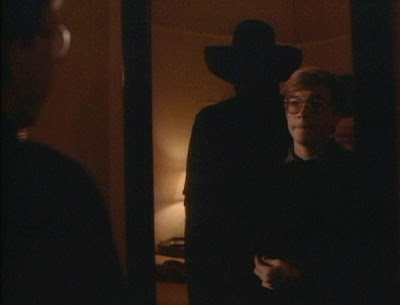 Eric arrives ready to fight, but Danny stalls until the Shadow Man arrives, appearing out of the darkness behind him. 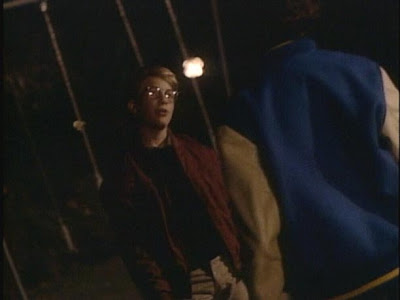 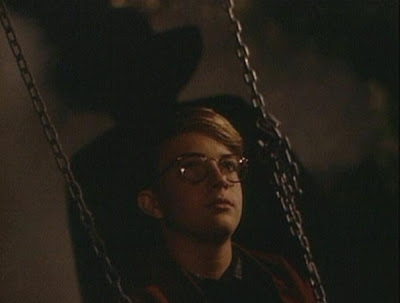 Eric runs for his life and yells for Danny to do the same. 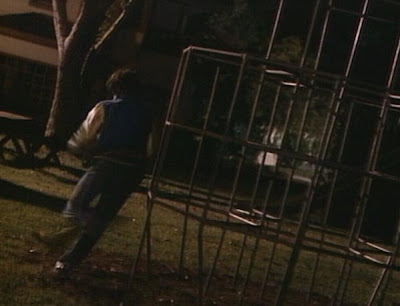 Danny, confident that he won't be harmed, dawdles in the park at the foot of the Shadow Man, even encouraging him to pursue Eric, who shouldn't be too hard to catch. 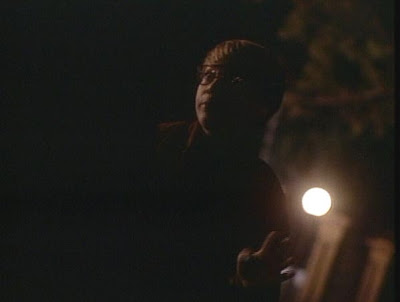 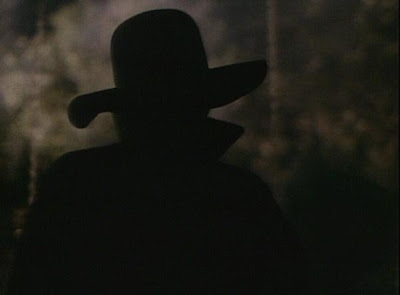 But instead, the looming Shadow Man seizes him by the neck and lifts him into the air. Gasping in fear, Danny protests: "You said you'd never hurt me! You promised!" 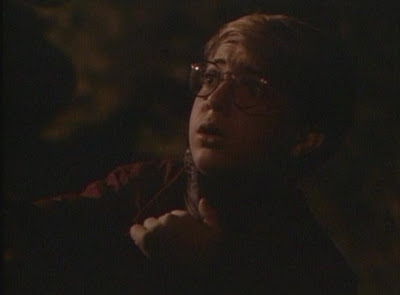 "I am the Shadow Man, and I will never harm the person under whose bed I live...

...but I am a Shadow Man from under someone else's bed!" 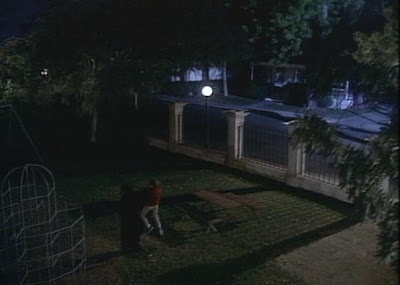 The Shadow Man can be found on The (New) Twilight Zone Season 1 DVD. 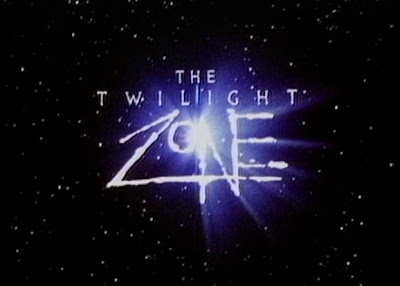 Another one I thought was good, was the Stephen King story for Grandma.
I THINK that was a new twilight zone.

Ormon: Yes, that was another memorable one... not only was it based on a Stephen King story, but the teleplay was by one of my favorite authors, Harlan Ellison!

I have to do a shadow-themed post today, and one of the first things I thought of was this episode.

Scared the pants off me at the time. Anyway, when I googled the quote about "another person's bed" your post came up.

Hope you don't mind if I link to this?

Megan,
Link away! Although now you have me curious as to what kind of contest you're in that requires a shadow-themed blog entry today...?

It's a Theme Thursday post and I am visiting from Megan's site. Every week the subject changes and so next week it will be different. Anyone can join in and the link is on our sites. Hope you will join us.

And thank you for letting Megan link to you cause that was very scarey and I am thankful it is daylight while I am reading your site.

i was trieing to look up the guy who has shadow man live under his bed and his name is janathan ward but i cant find any pictures of him as a grown up or as a kid ,,, i wanna know what he looks like now because he looks identical to my dad when he was a kid,,, can you give me a link or something or i biogrophy???

Anyone knows the background music heard in the bar where the kid tells Danny that the maniac got Murphy? thanks