So claims the voice blaring from a loudspeaker mounted somewhere atop this dark-ride's facade. Factory worker and insomniac Trevor (Christian Bale) is enjoying an afternoon at the carnival on a first-date with Marie, a waitress he met on the graveyard shift at his favorite diner, and he's taking her son Nicholas for a ride while she makes a phone call.

Things start out innocently enough. In the first scene they pass, we see the remains of a motorist who got stranded and crawled through the desert to his doom.

Next they pass a roadside diner where a zombie-like waitress holds forth an unappealing blue-plate special. 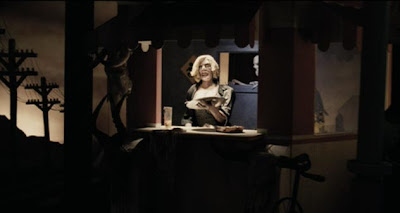 As they progress through the ride, the scenes get increasingly disturbing, and some even seem to invoke recent events in Trevor's troubled life. An Indian brandishes his trophy... a severed hand! (One of Trevor's co-workers lost his hand a few days earlier in a factory accident). 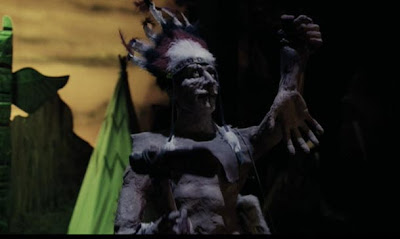 The devil emerges from a tunnel pushing an ore-cart filled with other missing limbs. This prompts Trevor to suggest that Nicholas close his eyes. 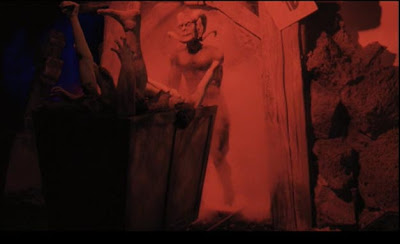 A woman places flowers on a coffin, possibly a child's.

Next they cruise through a town devastated by a nuclear bomb. Shriveled bodies dangle out of windows.

At the end of town is a motel decorated with this kitchy neon sign.

But Trevor isn't prepared for the inappropriate animated silhouettes visible through the windows. (This is another scene that seems particularly pointed at Trevor, who regularly visits a "shady lady" of his own, a prostitute played by Jennifer Jason Leigh.)

A safety officer appears ordering them to slow down... 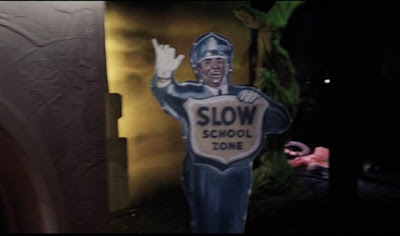 But just as quickly, a child shoots out in front of their ride vehicle and is knocked down...

Next is a fiery car wreck and its bloodied victim. 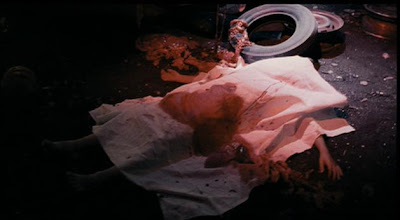 At this point Trevor is so uncomfortable and disturbed by the ride, you half expect him to grab Nicholas and jump out of the vehicle just to put an end to it. But it looks like the ride may be coming to a close... a fork ahead offers either the "Highway to Hell" or the "Road to Salvation", which may very well be the exit. 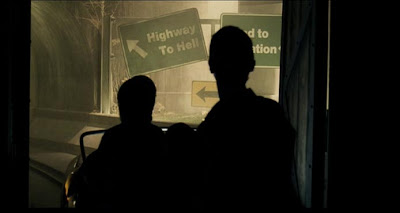 But the ride isn't over as the vehicle is forced onto the Highway to Hell and into a dark tunnel... 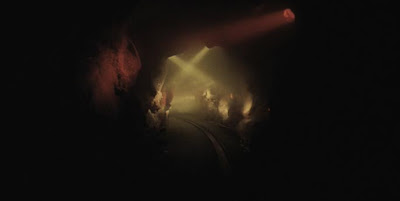 ...that on closer inspection is comprised not only of rocks, but of twisted and tortured bodies!

Trevor looks like he will be demanding his tickets refunded.

If you haven't seen The Machinist, do check it out. It's a dark, mysterious and atmospheric puzzler that unfolds slowly like a lingering nightmare. And the soundtrack by Roque Banos is amazing...a haunting score emphasizing strings and theremin that reminded me of Bernard Herrmann. (The soundtrack is out of print as of this writing but can be had on I-Tunes.)
Posted by Brother Bill at 8:32 PM

Nice blog. A great movie. All the best.

This is fantastic artistic movie with a creepy feel to it throughout. Bale sure did pay his price to make the role he played believable - It is worth watching such a actors dedication alone but the movie and the score to it are very creepy but excellent. I want to know if this Route 666 amusement park ride really exists somewhere because I would like know so I could go and ride it. PS. Note: This is the 41 year aniversary of those horrible and extremely creepy Manson murders in Benedict Canyon California.

You probably forget to mention the hanged man, which appears right after the indian chief. That hanged man is related to the hangman game in the whole film. The ride in the funhouse is one of the most important part of "The Machinist",revealing all about the reality in which Trevor lives, as well as the whole truth that he's been hiding from.

Thien Vinh Tran--you know what, until you mentioned it I never made the connection between the hanged man in the ride and the hangman game Trevor had been playing!