I first caught Steven Spielberg's made-for-TV film debut Duel on television in early grade school. At that time I had only recently become aware of this thing called a "film director", and could name exactly three: Alfred Hitchcock, George Lucas, and Steven Spielberg. So I was curious to see this earliest work from the guy who gave me nightmares with Jaws and left me watching the skies after Close Encounter of the Third Kind. 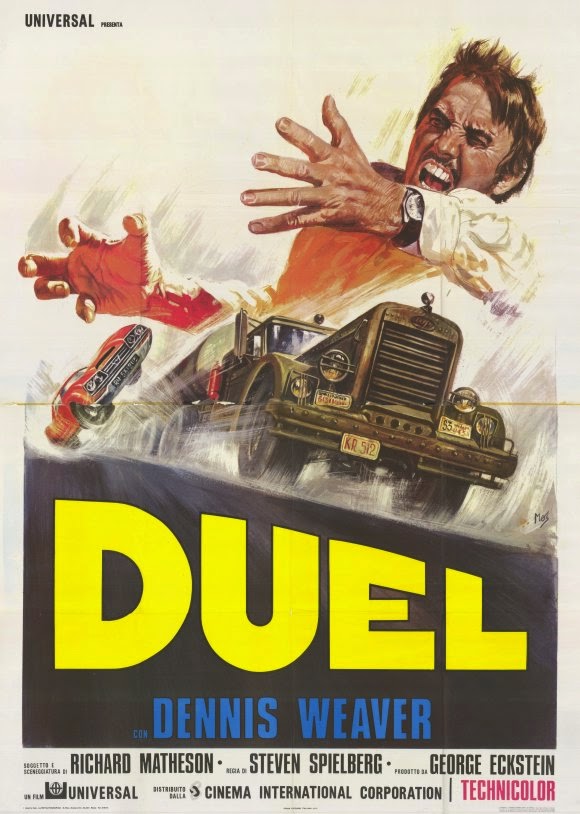 Based on the short story by Richard Matheson, Duel is a tense thriller built around a simple premise: a milquetoast salesman (Dennis Weaver as David Mann, in a mostly one-man-show) on a cross-country road trip, finds himself the seemingly random target of a psychopathic truck driver.
Their first encounters are of the nuisance variety.... the slow, over-sized vehicle hogs the road, only to tailgait once passed, etc., but slowly escalate into deliberate harassment, reckless endangerment, and finally a full on murderous chase with Weaver driving for his life. 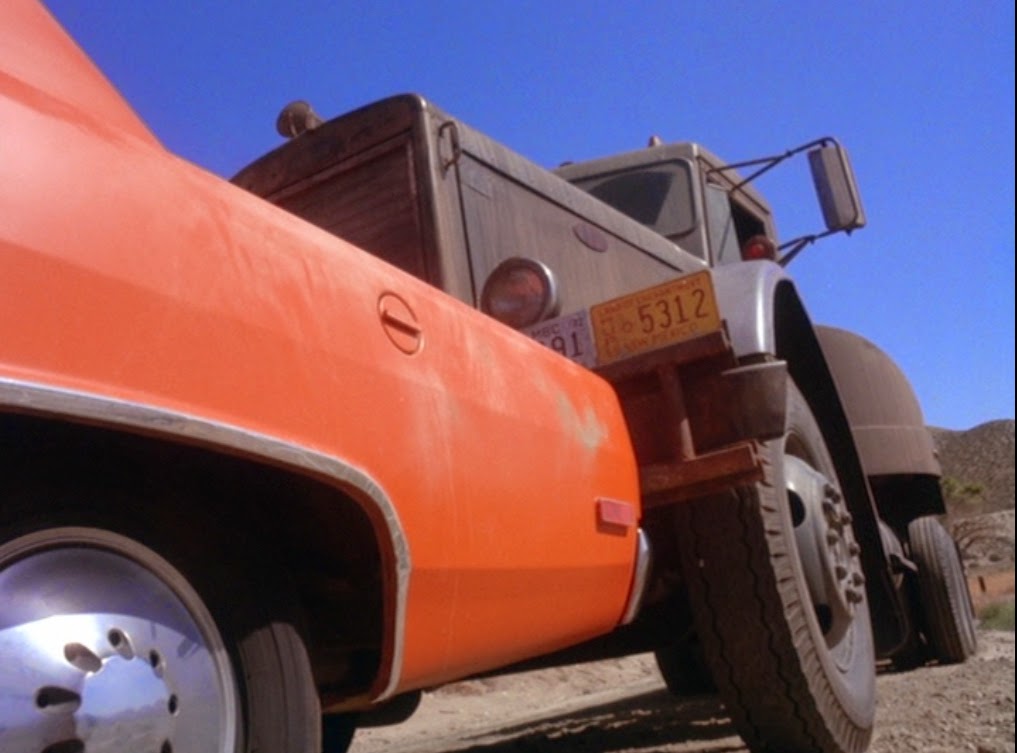 You can detect elements in Duel that would appear in Spielberg's later work... the  monstrous, expressionless truck is reminiscent of the relentless, pursuing great white from Jaws. 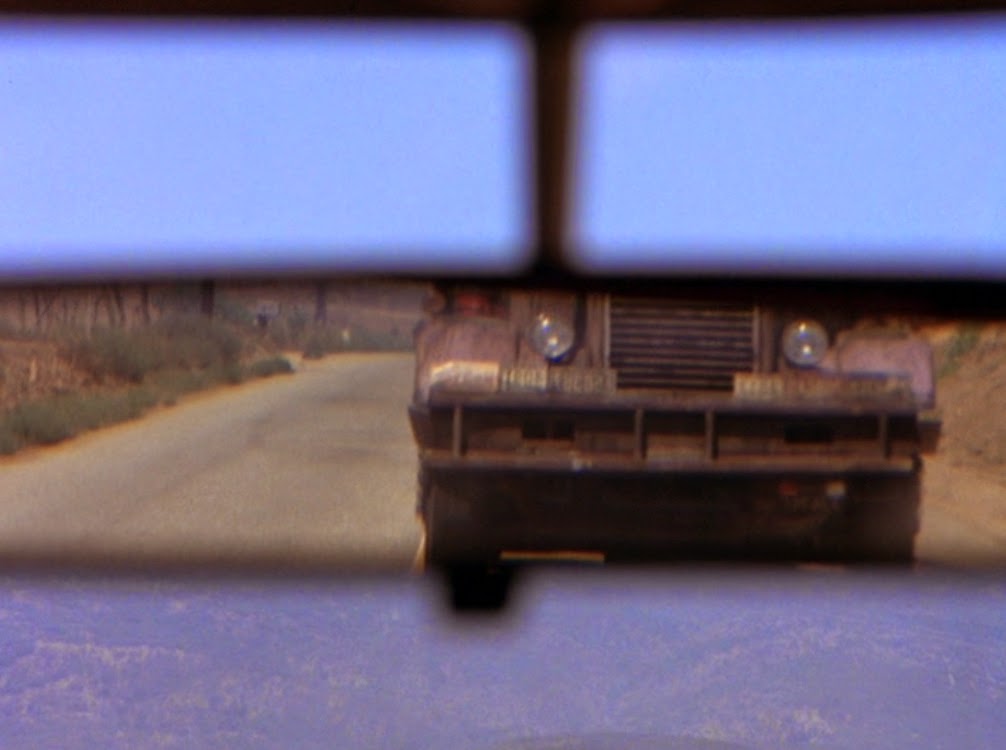 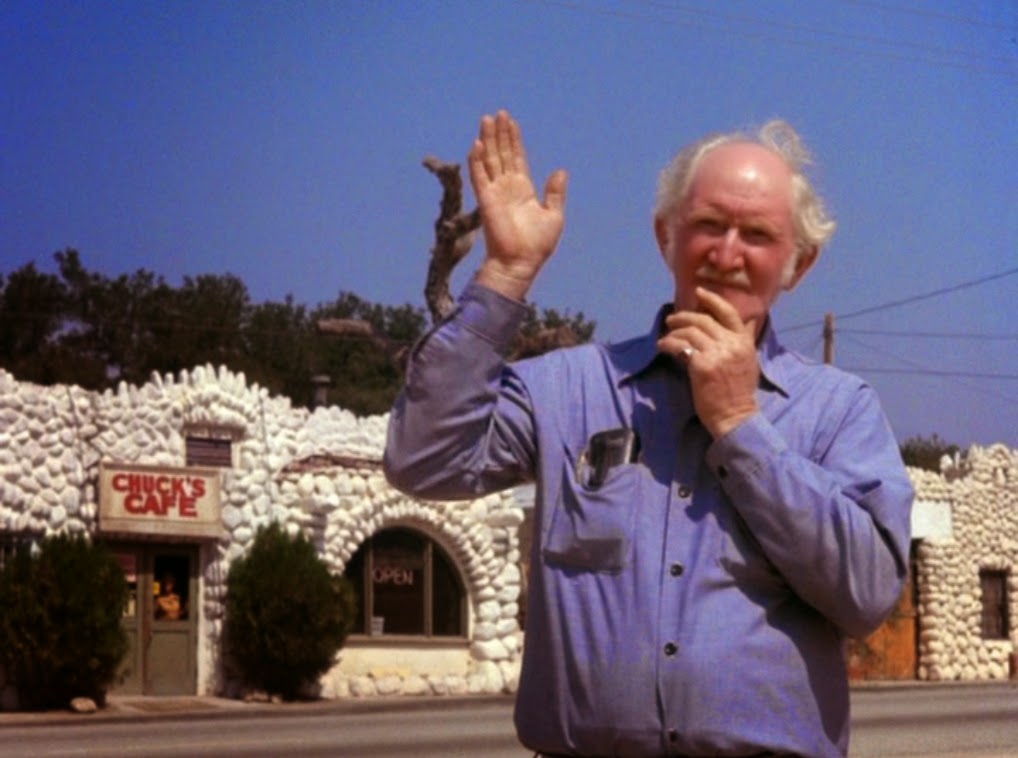 A run-in with a road-side exhibit of snakes and spiders seems like a first draft of the creepy crawly encounters of Indiana Jones. 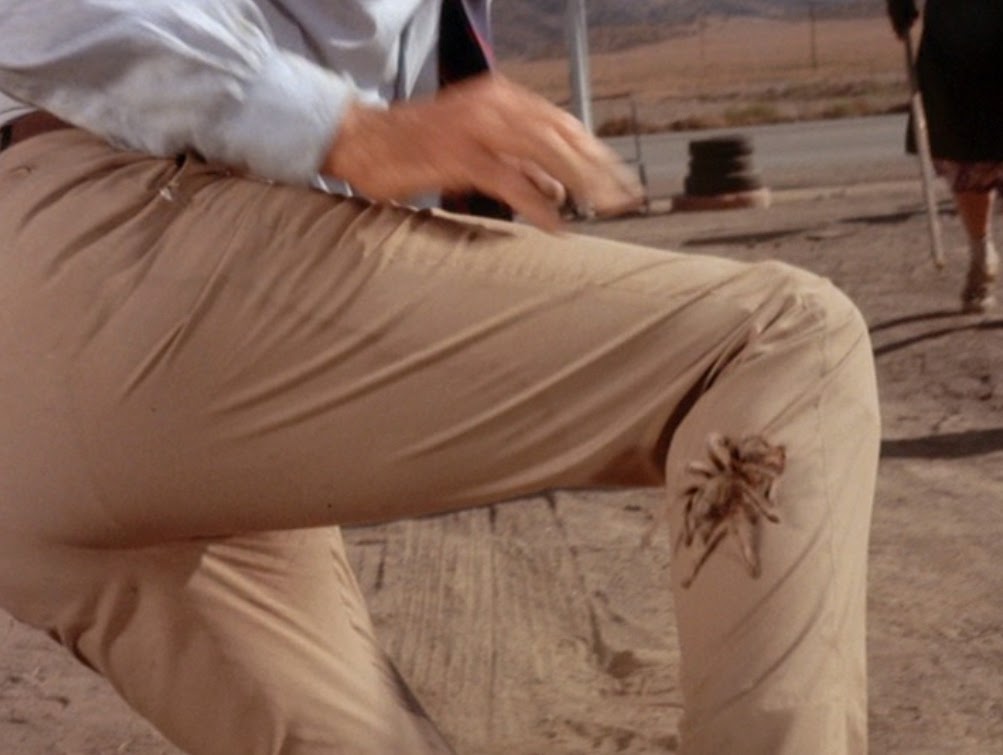 Simple but effective camera work distinguishes Duel from lesser made-for-TV fare of the period. The opening titles, artfully arranged around the geometry of the tunnels as the camera passes through. 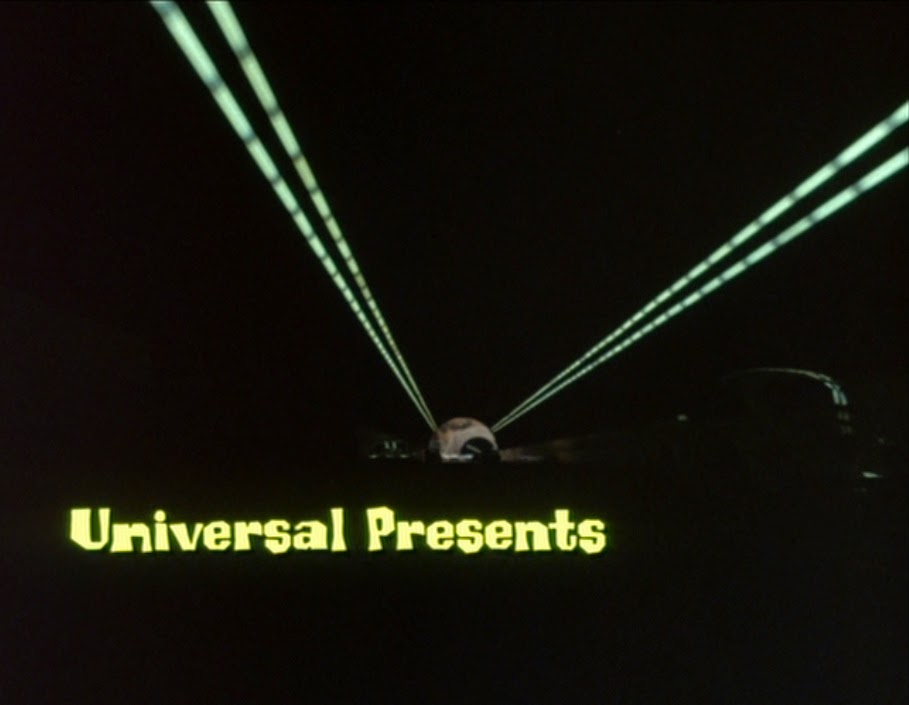 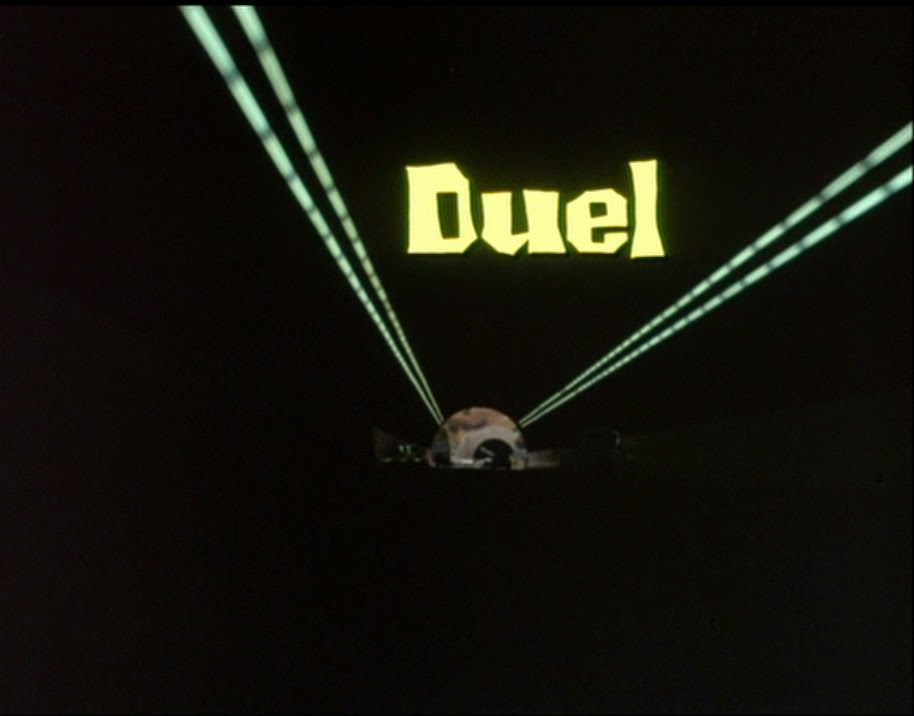 Interesting shots like this, with Weaver framed in a laundromat dryer window... 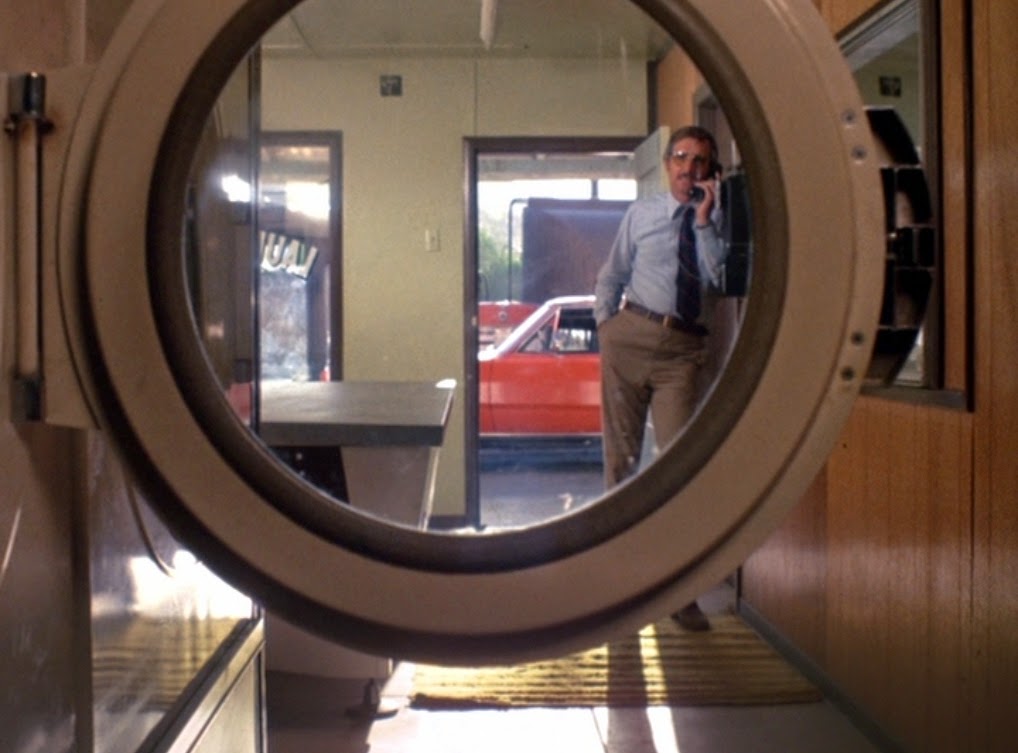 ...or this perspective shot which places Weaver's tiny car in the consuming cloud of the truck's smokestack.

But what really made Duel stand out was the out-of-nowhere, big twist ending that nobody saw coming. Weaver's car has overheated at the top of a hill and is cornered against a high cliff ledge when suddenly his eye's start to glaze over... 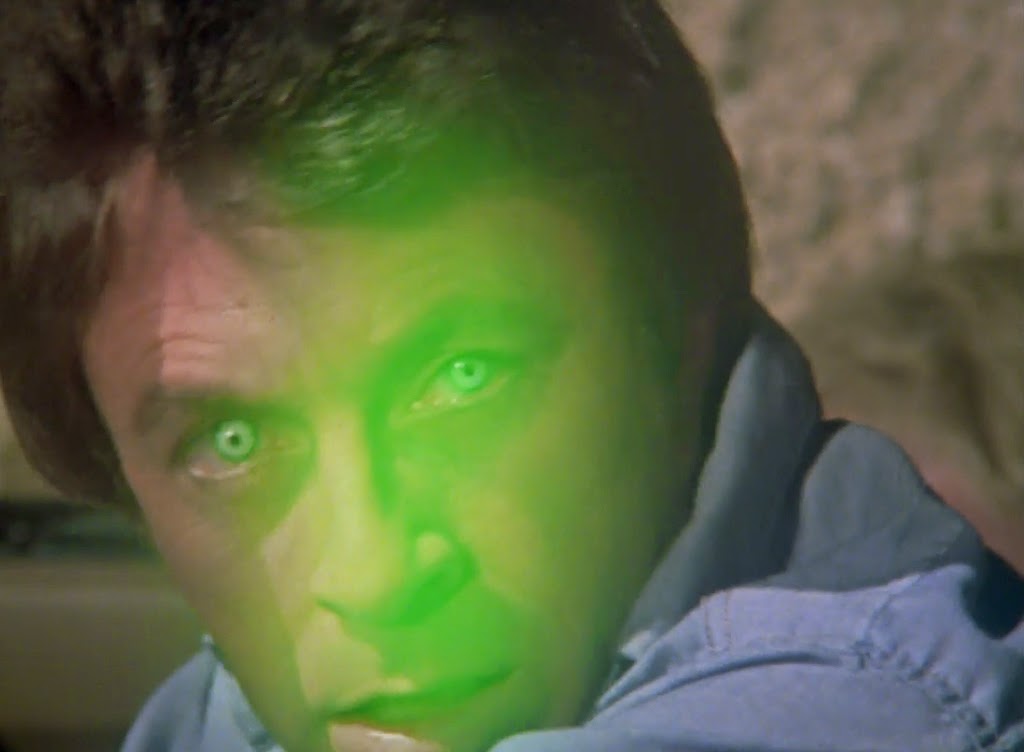 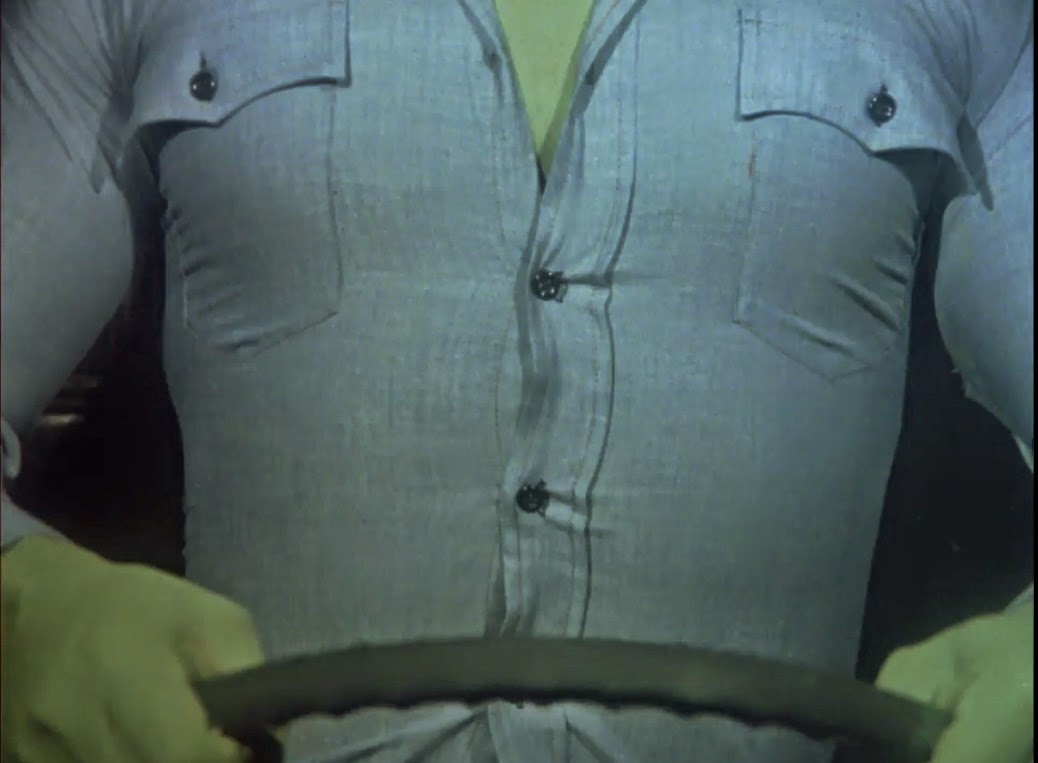 ...and he transforms into a mean, green smashing machine. What the---? David Mann is actually The Incredible Hulk?? 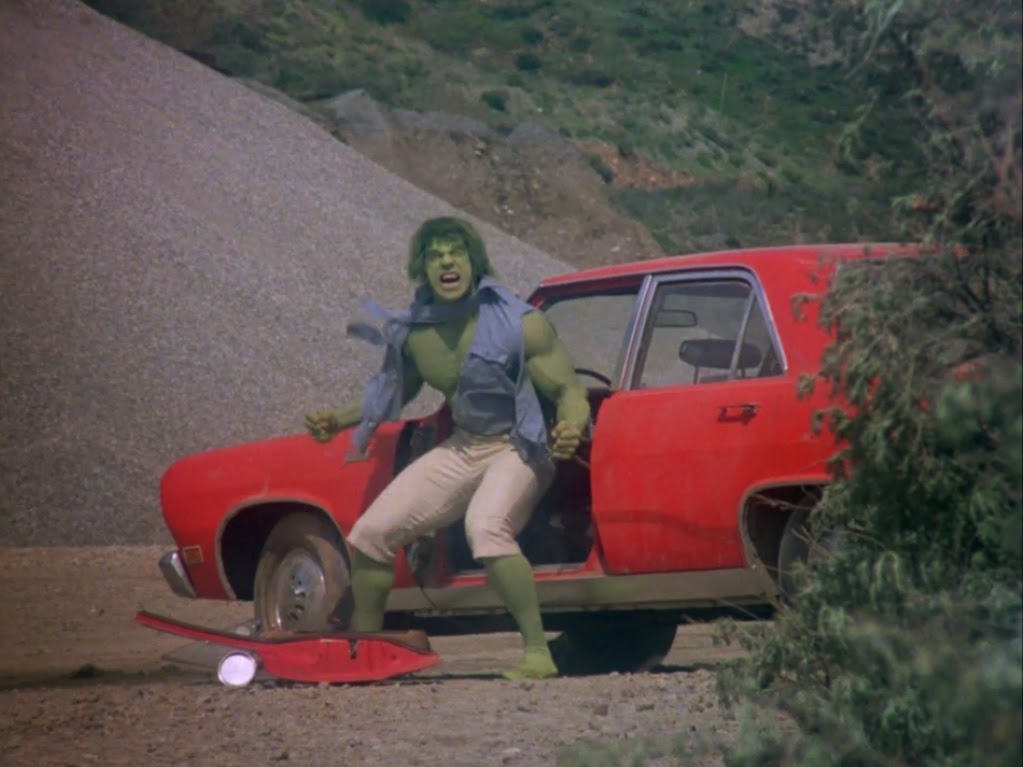 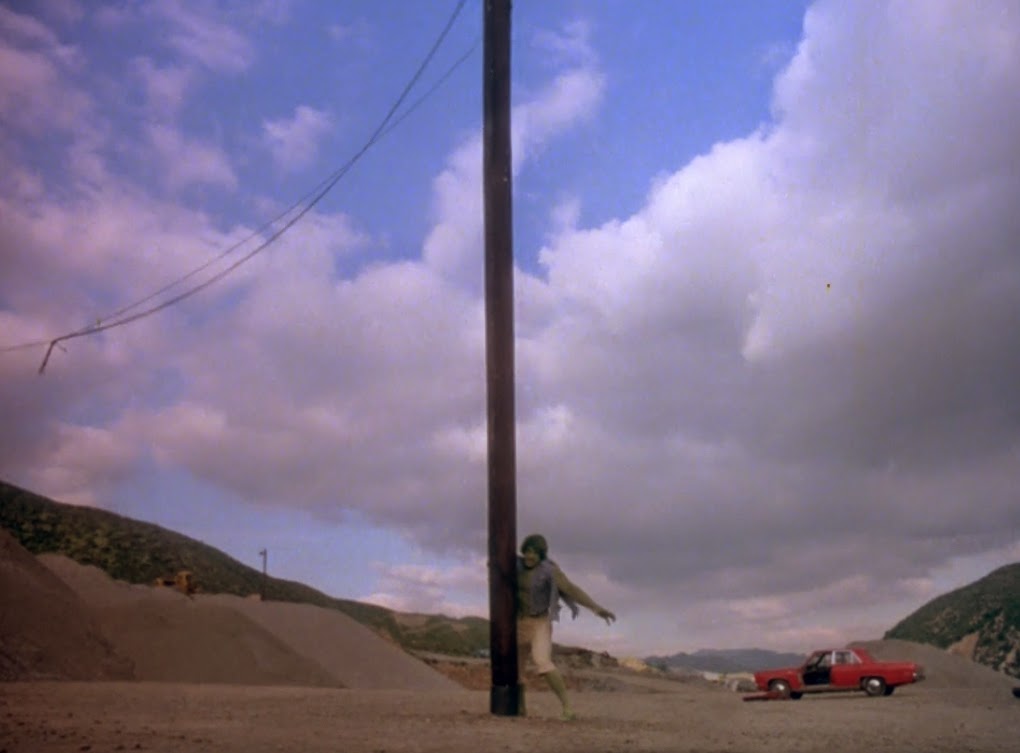 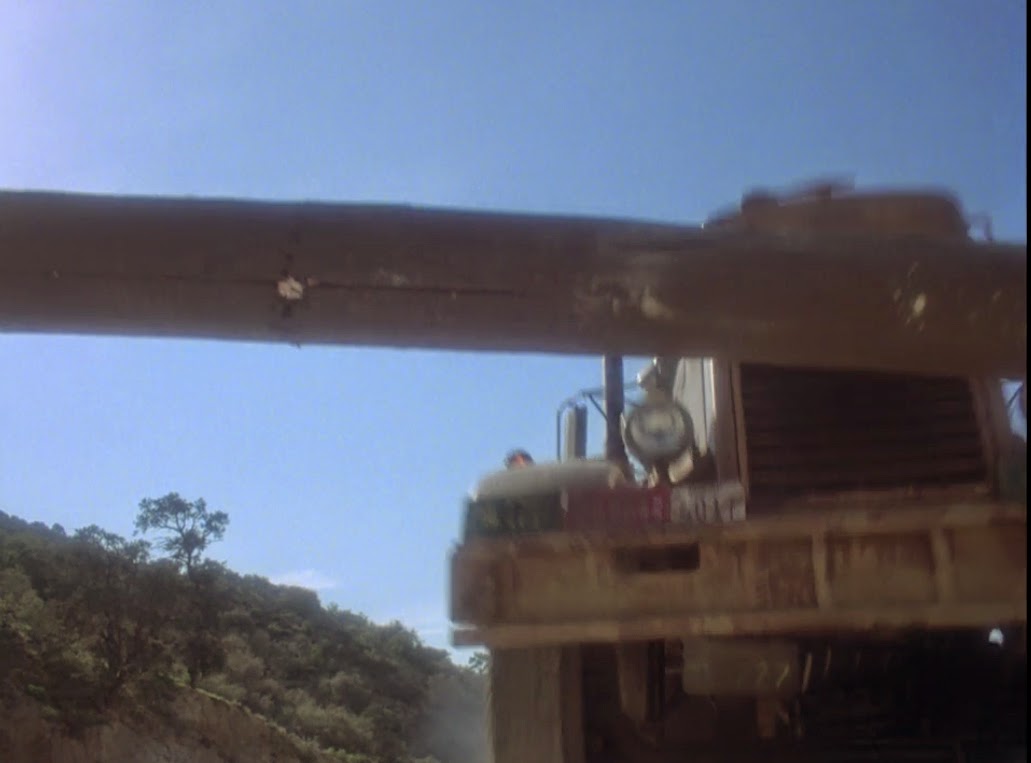 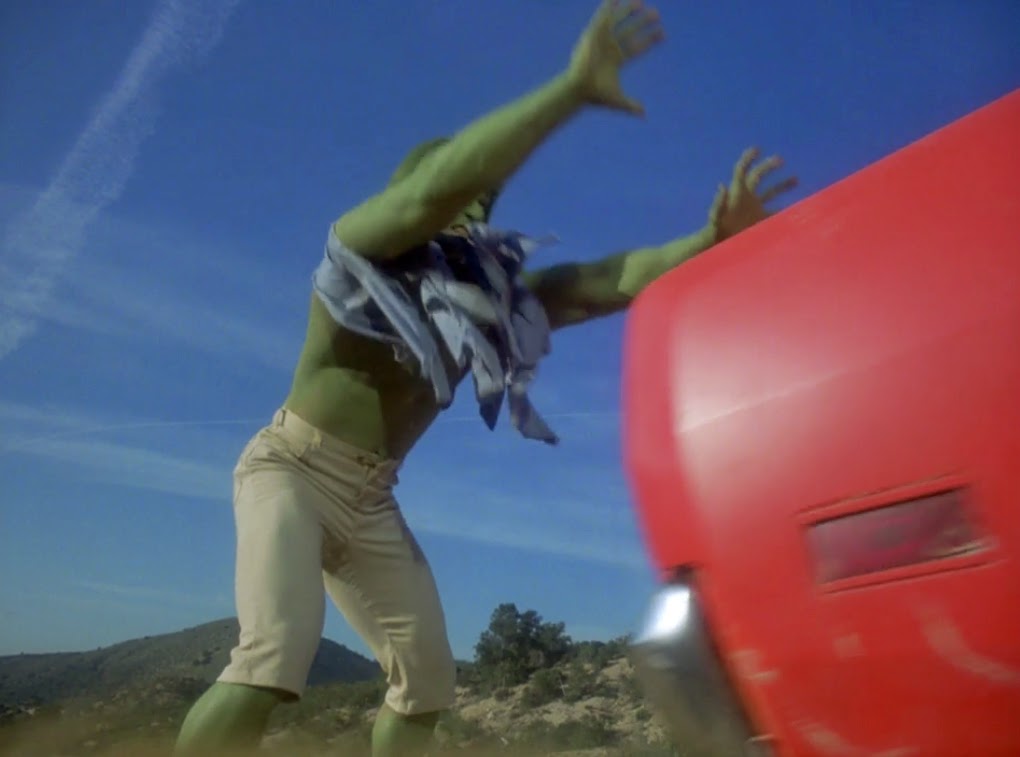 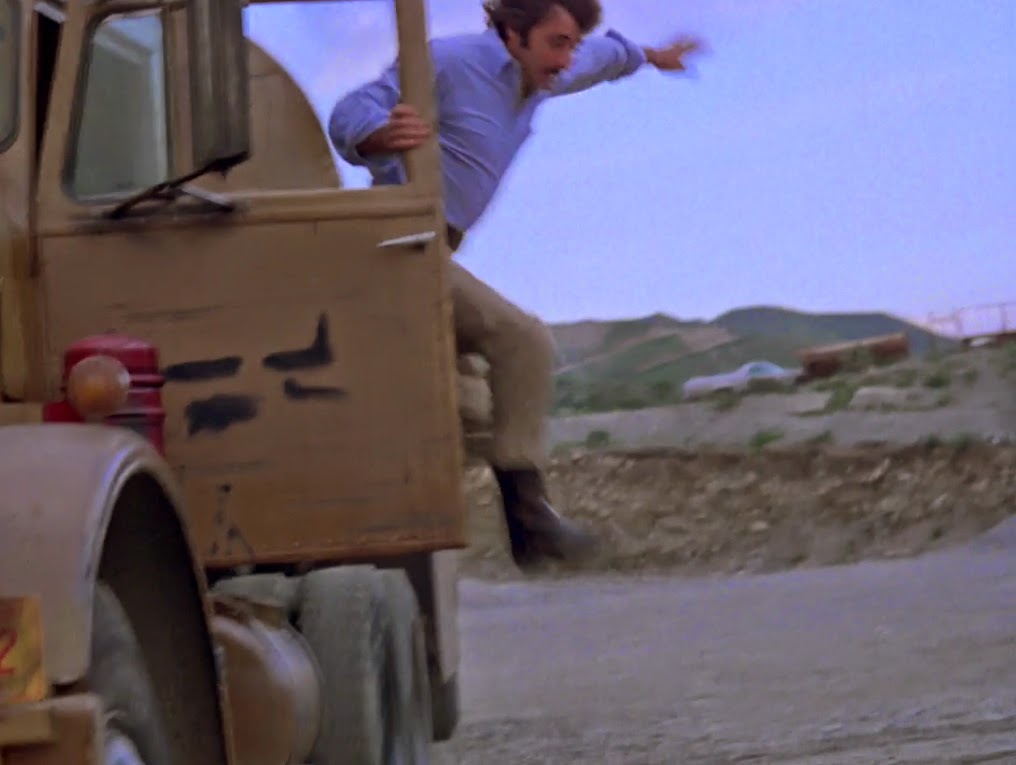 Truck and car spill over cliff! 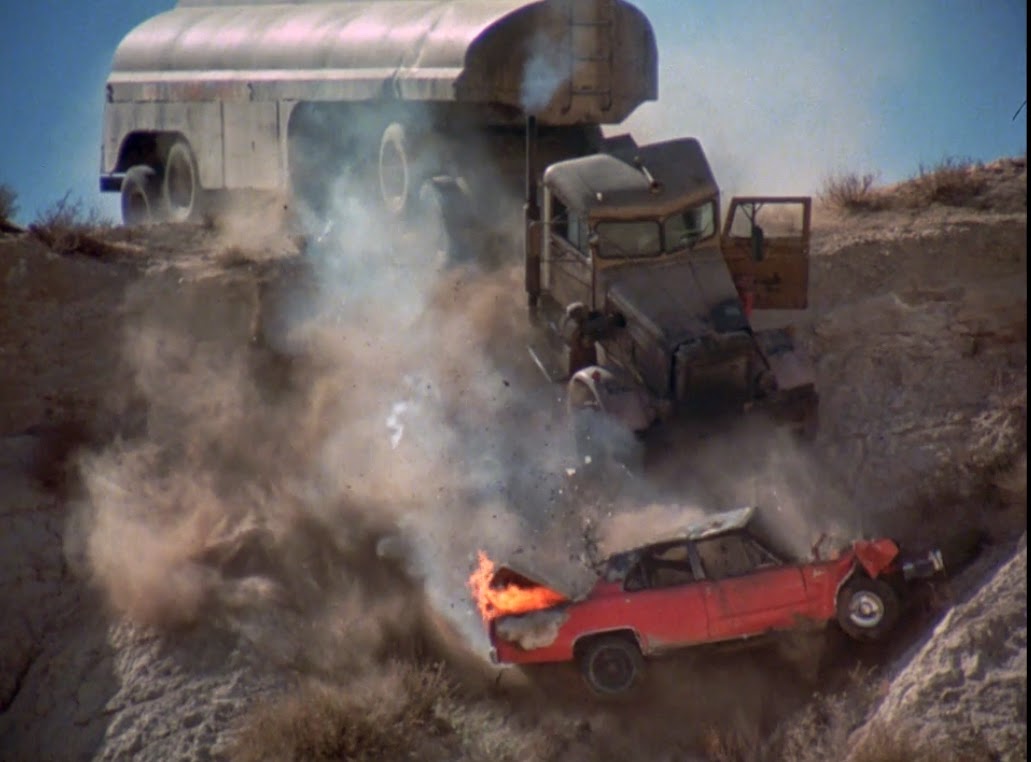 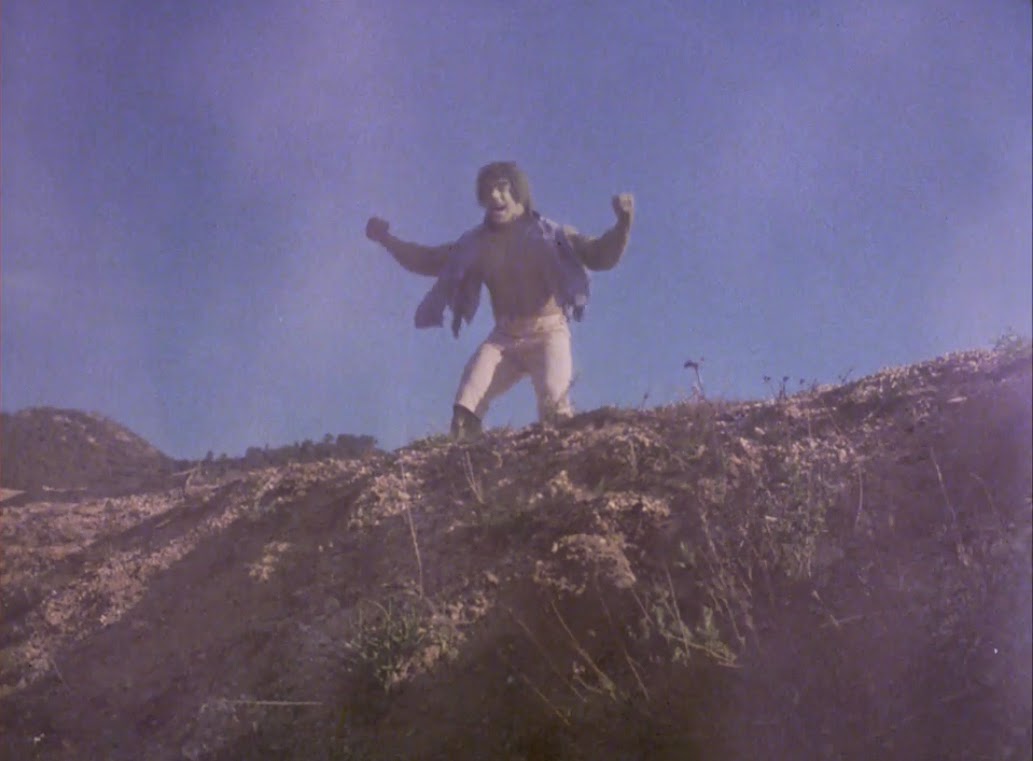 What's that you say? This isn't the ending you remember?

Okay... so, this happened: Universal, the studio that produced both Duel and the 1970s television series The Incredible Hulk, got the bright idea of building a first-season episode entirely around repurposed footage from Spielberg's mini-masterpiece.

The plot finds David Banner (Bill Bixby) picked up hitchhiking by a lady truck driver (Jennifer Darling... a former fembot from The Bionic Woman) who steals back her father's scary, flammable and strangely familiar truck from a group of smugglers. 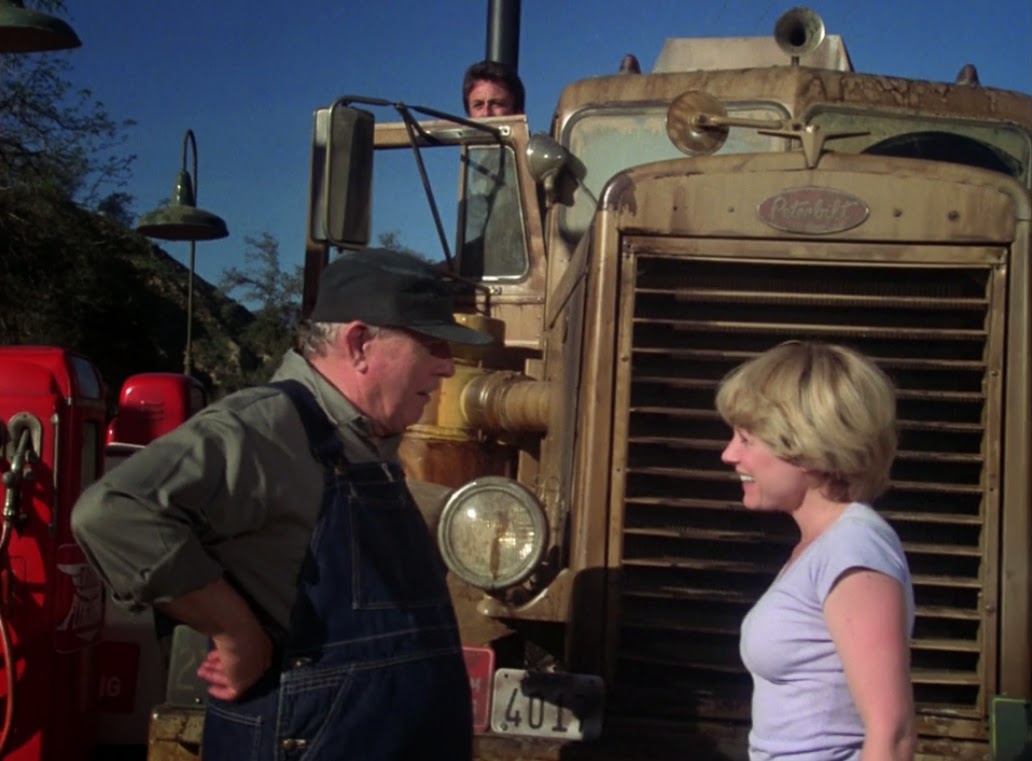 The whole episode is a series of back-and-forth carjackings and chases in which everyone gets their turn to drive both Weaver's red 1971 Plymouth Valiant and the 1955 Peterbilt truck. 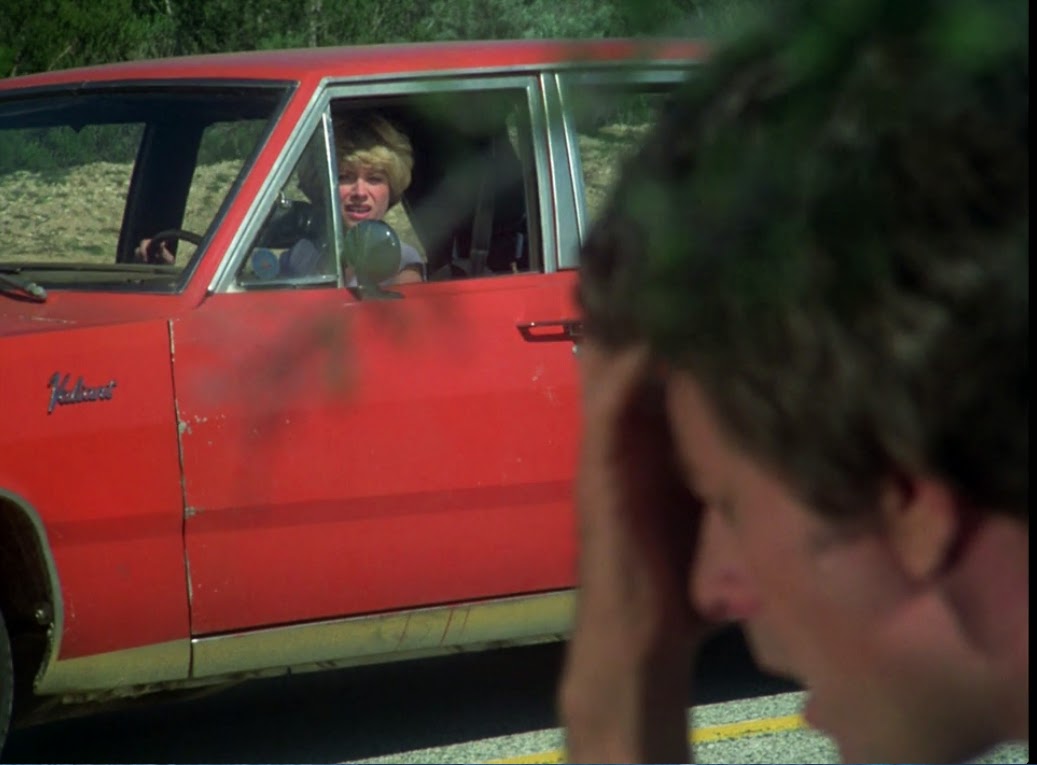 There's also new footage using the original truck, and it's cool seeing the iconic monster continue its path of destruction in an entirely new context and setting... 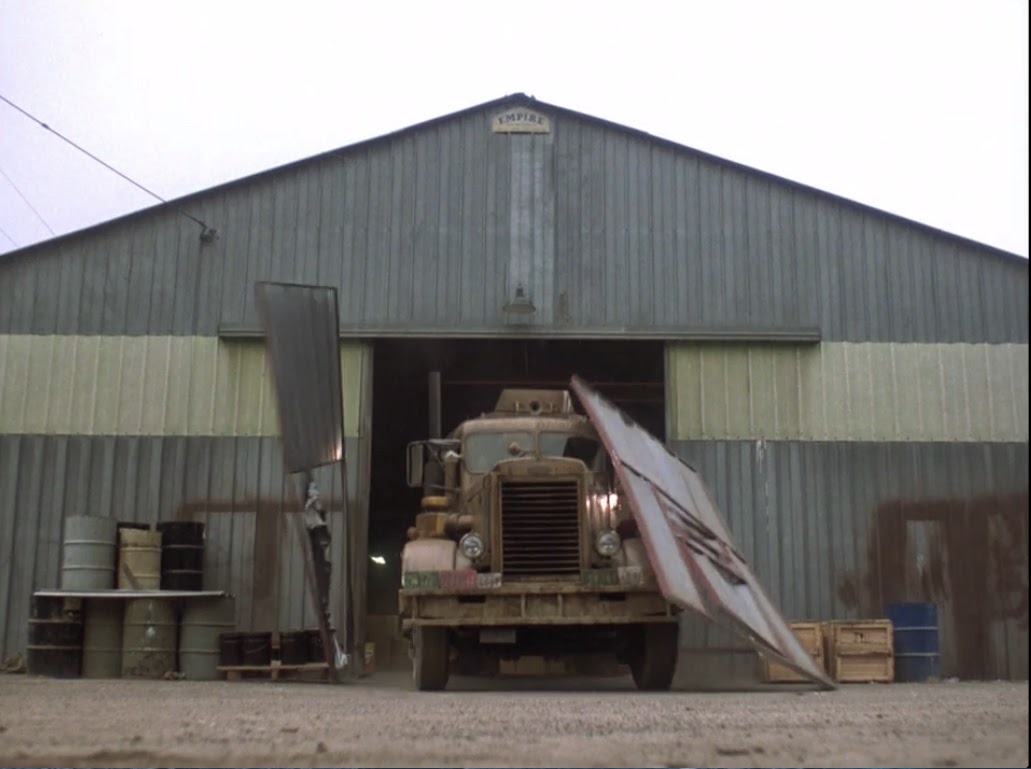 ...not so cool? Discovering its being driven by the darling Ms. Darling. 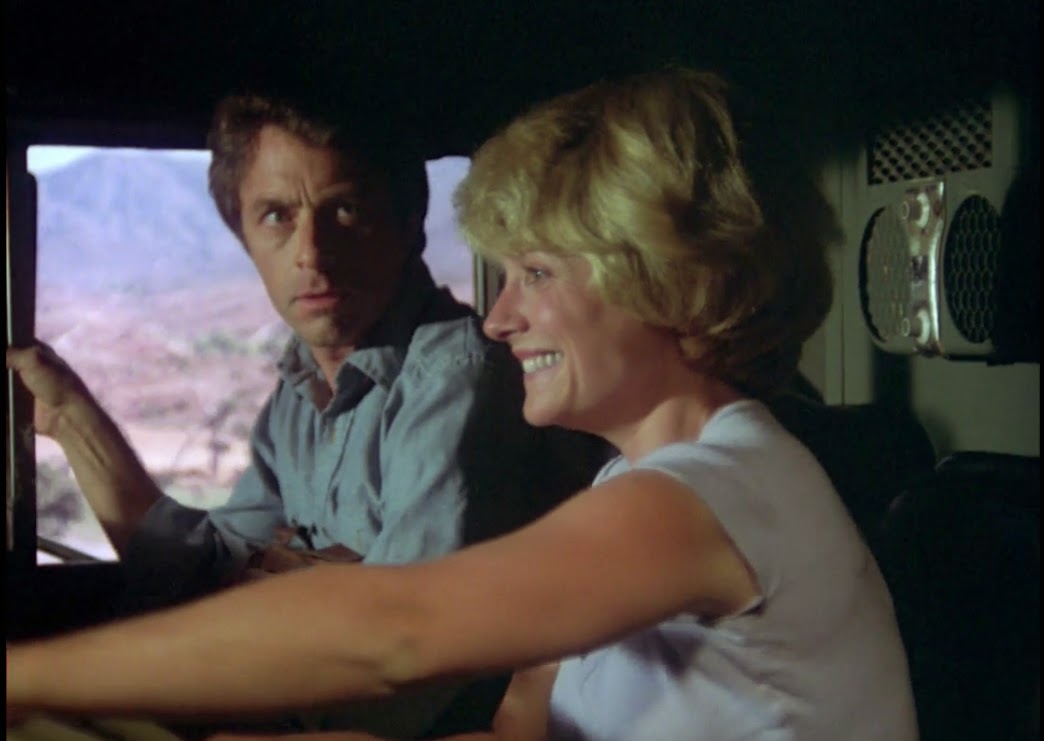 Spielberg wisely resisted studio pressure to shoot Duel's car interiors on a stage with rear-projected backgrounds and instead filmed on location in a moving car, but we can get a sense of how things may have turned out in this Hulk episode, which went with the rear-projection technique.
Bixby and the lead smuggler (Frank Christi) each wear blue collar shirts to help match the original Weaver footage... 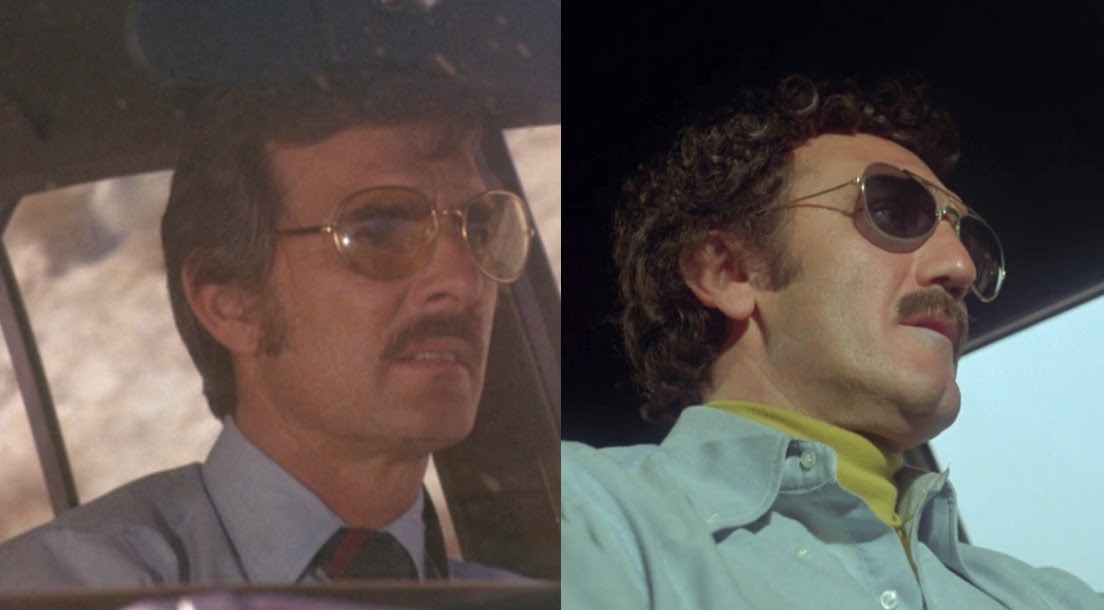 I can't tell where Duel ends and The Incredible Hulk begins!
...and, as The Incredible Hulk plot demands that occasionally the red car carry two occupants, the script helpfully provides excuses for the passenger to duck his head down to explain away why there is only a lone-driver visible in the inserted Duel footage. 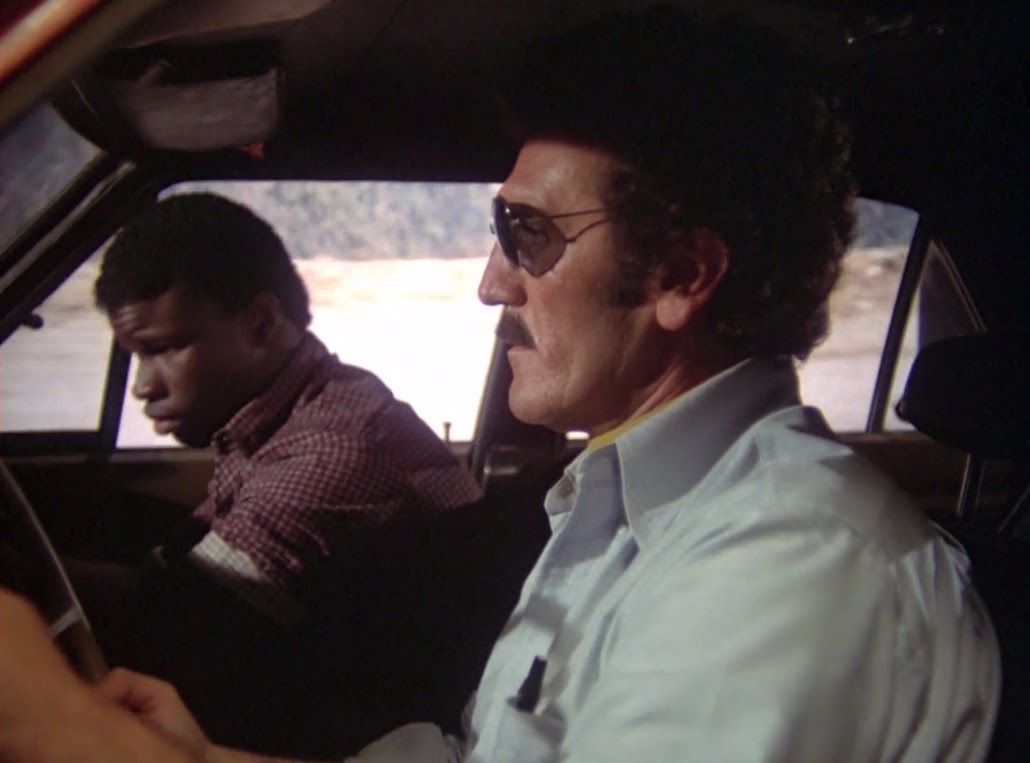 "Duck your head all the way down under the seat and look for that gun, dammit!" 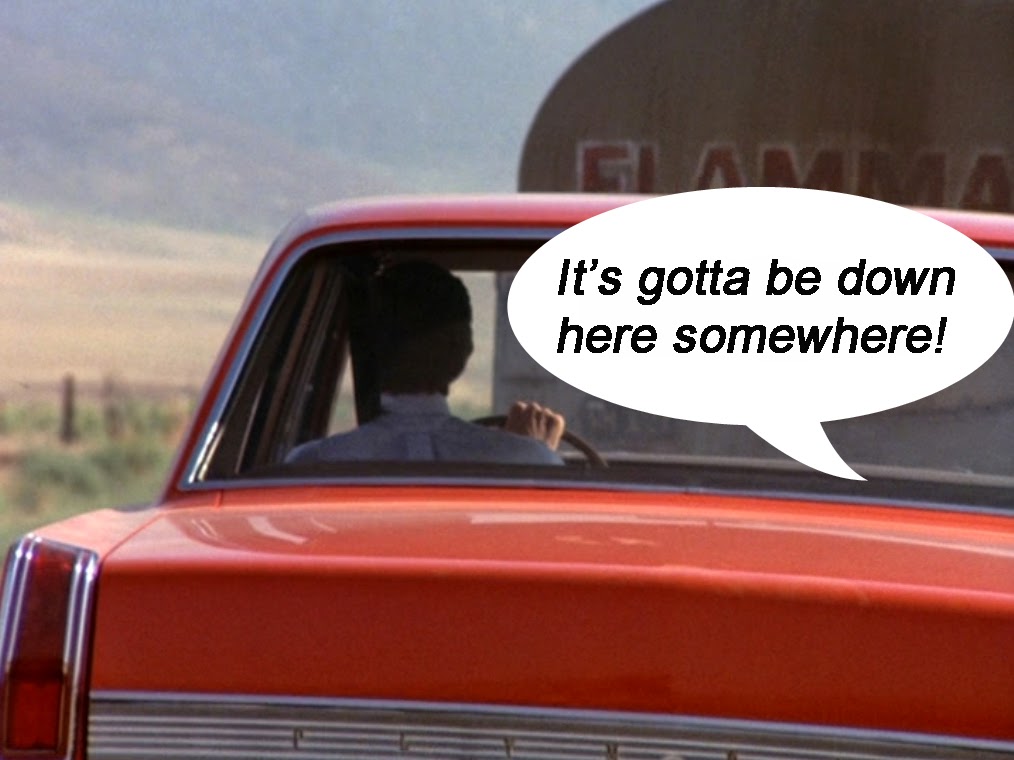 This isn't the only time a Universal television character found themselves crossing paths with a Spielberg villain. Did somebody say... Nancy Drew vs. Jaws? 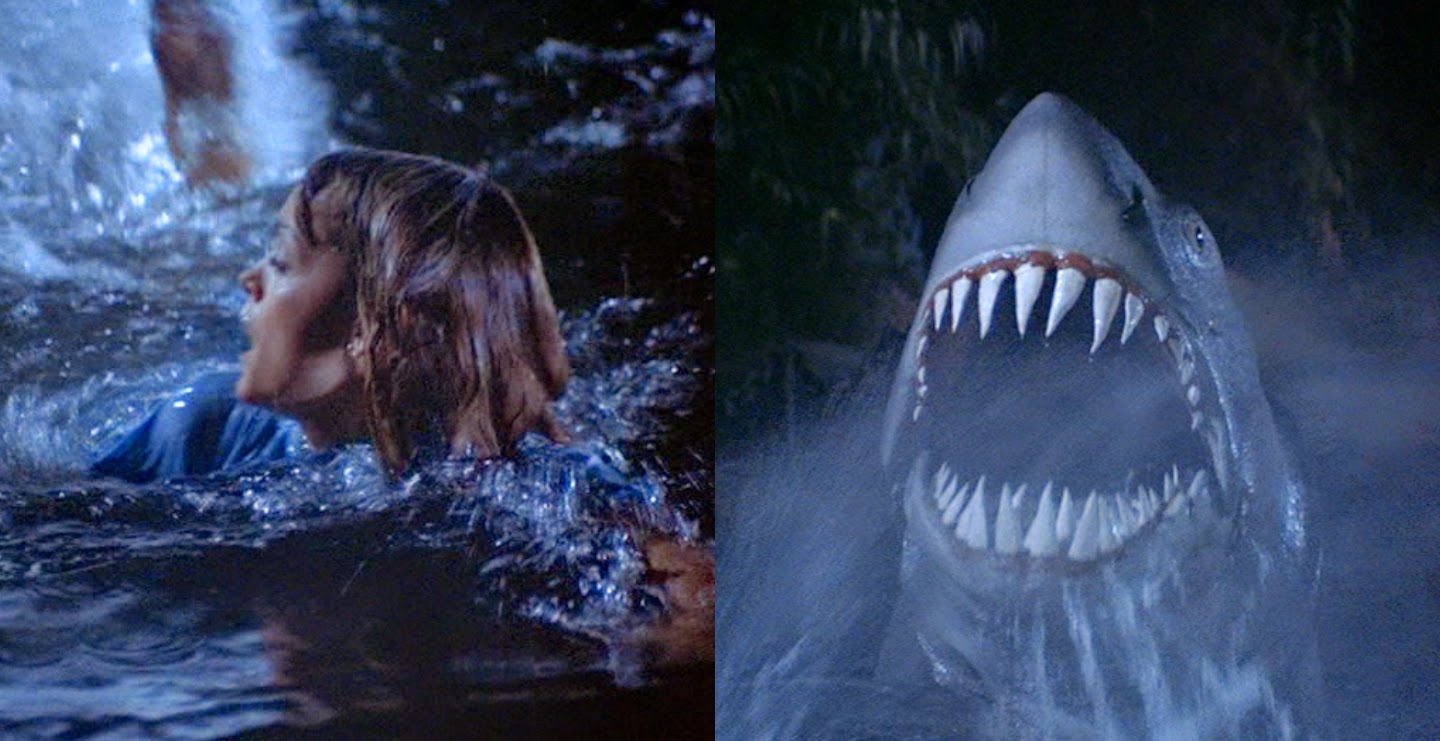 Duel is available on DVD and Blu-Ray.
The Incredible Hulk episode "Never Give a Trucker an Even Break" is available on DVD and is streaming on Netflix as of this writing.
The Hardy Boys Nancy Drew Mysteries episode "The Mystery of the Hollywood Phantom", featuring Jaws, is available on DVD.
Die-cast toys of Weaver's red '71 Plymouth Valiant and the 1955 Peterbilt 281 Tanker are available... NOWHERE. Come on, Hot Wheels, make this happen!
Posted by Brother Bill at 7:02 PM

Super cool ! I had no idea, but now I can be trivia king. I wonder how many other examples of this are out there (not counting uses of random stock footage or recycling of scenes in the same series ?

I love Dennis Weaver's role in the '71 movie; one of the best made for TV suspense movies ever (in my opinion, of course)... a movie I have on DVD -- the collector's Edition. But to see the truck and car, and scenery reprized in the Hulk TV show was quite interesting.

Also, the Season 3 episode 'Equinox' features a brief scene from 'Jaws'. It's a beach scene i seem to remember, obviously used because 'Universal' owned the rights to Jaws too, as they do Duel, and of course 'The Incredible Hulk' series. Its only a quick shot but been a big fan of Spielberg's Jaws i noticed it straight away! It's not as obvious as the multiple Duel scenes in Season 1 episode 'Never Give a Trucker an Even Break' but the scene is there non the less if you look closely!