The Cross and the Switchblade / Wish You Were Here

My large stash of Jack T. Chick tracts aside, I don't normally gravitate towards religious-themed comic books. But I had to pick up this copy of Spire Christian Comics' The Cross and the Switchblade (1973) to see how the scene depicted on the cover played out. 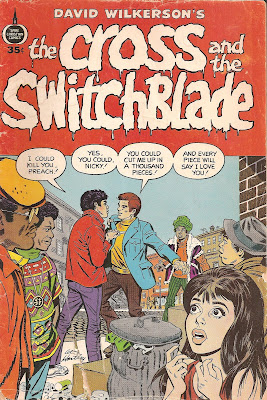 Threatened by a hoodlum at knifepoint, a young street preacher boasts that "you could cut me up in a thousand pieces... and every piece will say 'I love you!'"

The prospect of seeing such a disturbing scenario actually play out was irresistible. 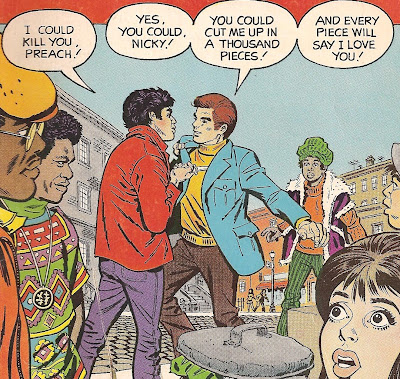 Adapted by Al Hartley from a 1963 autobiographical book (it was also adapted for film in 1970), The Cross and the Switchblade recounts the true story of Pastor David Wilkerson, who, prompted by alarming headlines of youth violence, and funded by a collection taken up by his congregation in a small Pennsylvanian church, ventured into the mean streets of New York to preach against inner city gangs. 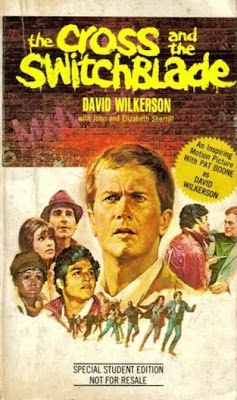 Unfortunately, in a classic case of bait-and-switch, the intriguing front-cover tease does not actually appear anywhere in the comic. On the one hand I felt ripped off, but on the other I had to admire how a little shameless sensationalist ballyhoo had successfully separated this rube from his money.

So, I was denied the grim thrill of seeing the dismembered pieces of a corpse chanting "I love you" to its killer... but I imagine it would have resembled a conversion of this final scene from E.C. Comics tale Wish You Were Here (Graham Ingels, originally appearing in The Haunt of Fear #22 [1953], these scans from a Vault of Horror 1990 reprint). 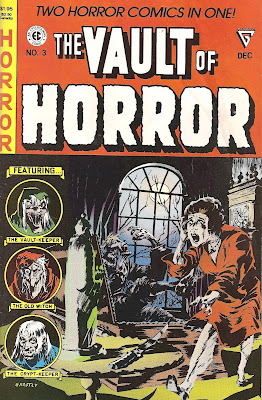 After Jason Logan dies in an automobile accident, his wife Enid uses a magic jade statue (which grants wishes, ala The Monkey's Paw) to wish him back alive... 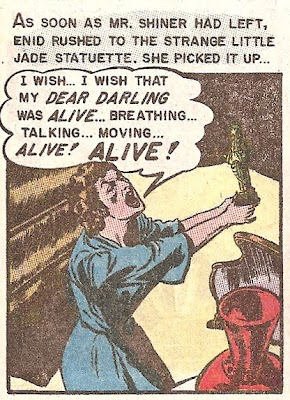 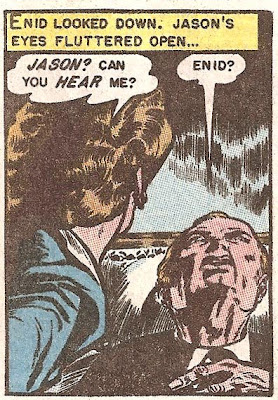 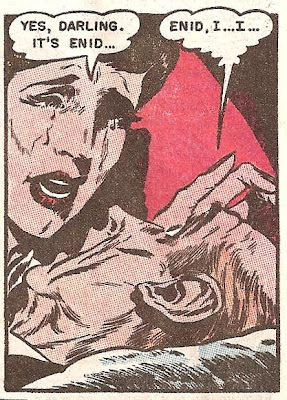 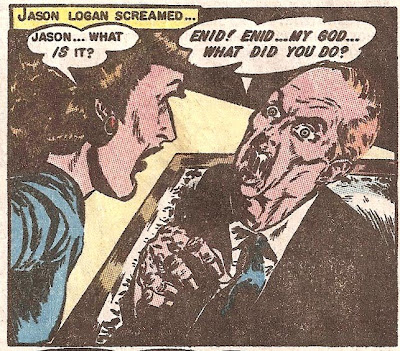 Jason does return to life, but with one minor hiccup... Jason's body had already been embalmed, and the formaldehyde running though his veins has his now living body writhing in agony... 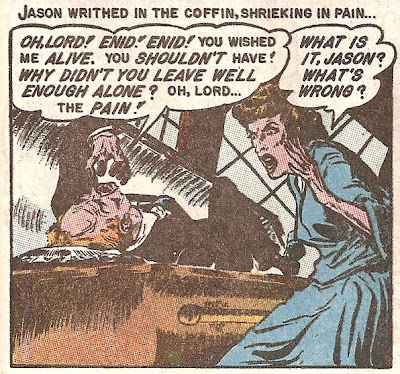 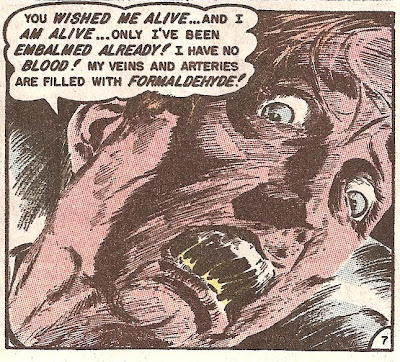 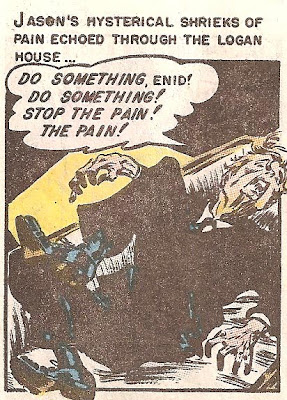 Desperate to release her poor husband from his misery, Enid shoots him with a gun, but this merely increases his pain. 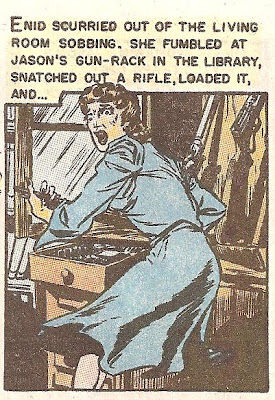 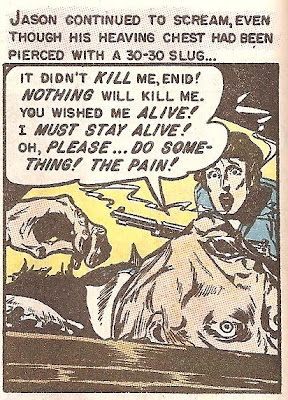 She then grabs a knife and proceeds to chop Jason's body into a million severed sections... 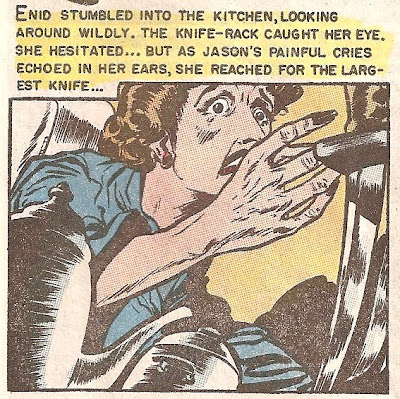 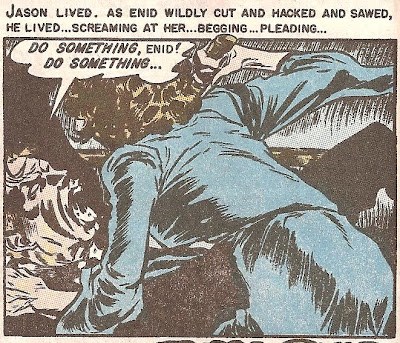 But her wish to keep him alive prevents Jason from succumbing to death and enjoying any final peace. As Enid continues cutting, she never notices that every tiny severed section of Jason's body is pulsating in eternal pain... 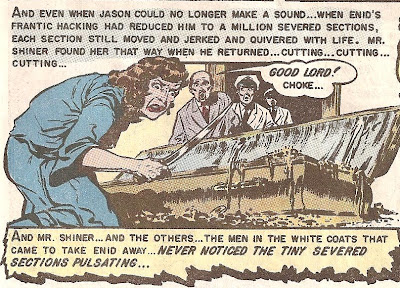 This story was adapted for the anthology film Tales From the Crypt (1972, Amicus). 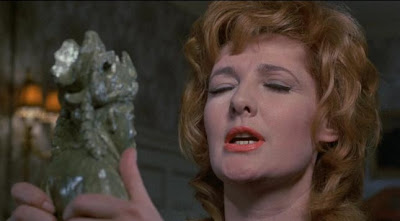 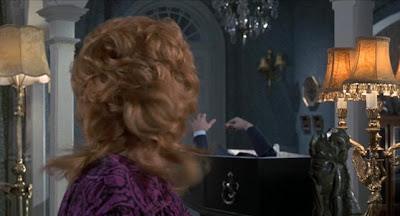 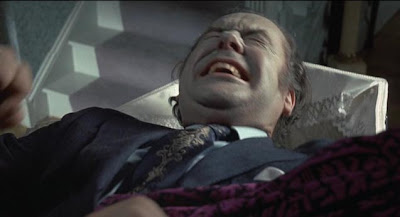 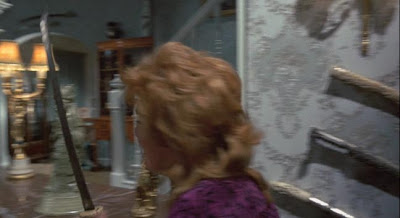 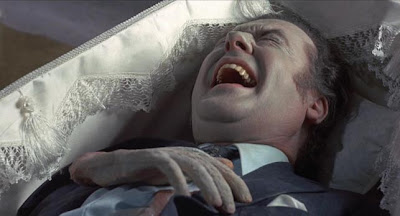 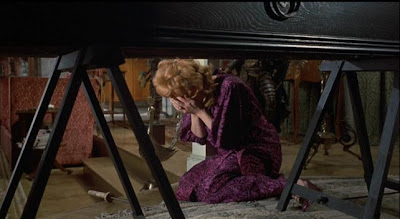 Thank you for this post. David Wilkerson passed away yesterday. I linked to your post in my tribute to him.