We've all gotten them one Halloween or another. You're going through your trick-or-treat bag, sorting the candy and gum, and there it is: The Jack T. Chick tract.

The first time you got one, maybe you thought it was a cool, Halloween-themed mini-comic book. Then you read it and realize you've been had. The "Halloween comic book" is actually anti-Halloween propaganda, dropped in your unsuspecting sack by some party pooper trying to cast a buzzkill on your special night.

"Jack T. Chick" is the mysterious figurehead of Chick Publications. I'm not sure if he's a real person, an alias, or some kind of front man ala Remington Steele. (Read his "biography" at the official Chick website here). I do know that Chick Publications carries literally dozens of different tracts with all kinds of themes and titles, but they all have one common message: you're going to Hell !

Several tracts have a Halloween theme, and these are often the ones that end up in your trick or treat bag.

THE TRICK (pictured above)
Despite the cartoony costumed ghost, devil and witch on the cover, this tract is serious business. A Satanic cult decides they can increase their annual human sacrifice count if they plant poison, syringes, razor blades and broken glass in Halloween candy.

Cut to Halloween night: Our three trick-or-treaters pictured on the cover head out, and being good kids who obey their mother, only visit the houses of neighbors they know. But in a diabolical twist, family friend and neighbor Miss Brenda is one of the Satanists! All the children end up at the hospital having eaten tainted candy. Only two live to tell the tale. 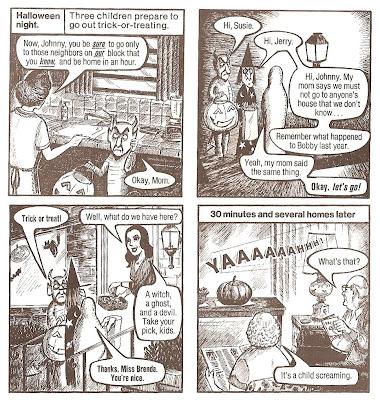 HAPPY HALLOWEEN
Three boys are visiting a neighborhood Halloween haunted house, and a pretty cool one at that. This one features a trap-door that drops our protagonists into an underground chamber called "The Abyss", full of of audio-animatronic devils and monsters. The kids are so scared they run out into the street, and one of them is run over by a passing car. His ghost soon arrives in Hell, which ironically looks similar to the themed "Abyss" room that scared him in the first place. 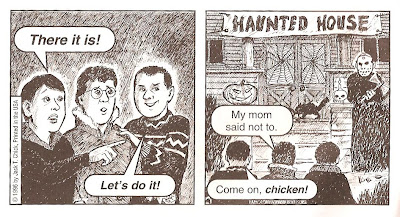 BEWITCHED?
Did you know Satan watches American television? According to this tract he does. And guess what his favorite show is? Well, the tract isn't titled "Dr. Phil", now, is it? Yep, His High Unholiness enjoys reruns of "Bewitched".

Seems this seemingly innocent show is actually paving the way for the acceptance of the occult in mainstream culture. "Bewitched" leads to Ouija Boards and horoscopes, followed by the inevitable spiral into hard drug use (LSD mixed with speed, according to one of the demons quoted here). 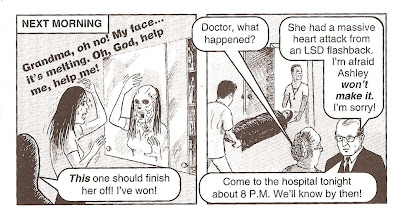 THE LITTLE PRINCESS
This self-referential (and self-congratulatory) tract centers on little Heidi, suffering from some vague malady, whose dying wish is to go trick or treating on Halloween. Amazingly, her parents allow it. She doesn't get too far in her weak condition, falling flat on her face after merely half an hour, but that was just enough time to receive a Chick tract from the kindly Smith family. Inspired by the tract, Heidi prays herself well. 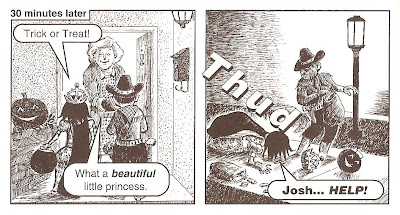 THE LITTLE GHOST
In this brief story, two boys costumed as a ghost and devil try to playfully frighten a little girl. But she's not afraid of them or anything else, thanks to her belief in Jesus. The boys ditch their costumes to join her in prayer. 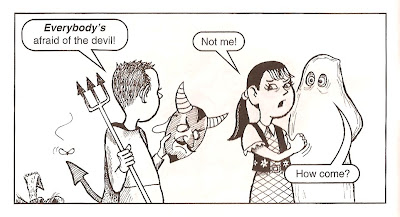 BOO!
This tract seems to be Chick's attempt to tap into the teenage slasher genre, with baffling results. We start with Charlie, a pleasant enough outdoorsman type, who has rented several cabins in the woods for his high school Halloween party. Then Charlie casually mentions that they'll be sacrificing a cat at the party that night. At this, one friend chuckles, and another opines "That's gross."

It's not clear if Mr. Chick thinks this is what normally happens at high school Halloween parties, or if Chris and his friends are Satanists, for which animal sacrifice at a Halloween party would be business as usual...its all very confusing. Before this tract is over, we'll see a pumpkin-headed serial killer (leading a pet rattlesnake on a leash!), human sacrifice, cat sacrifice, a police shootout, and Satan himself. DARK DUNGEONS
This one really has nothing to do with Halloween, however I did actually receive this one on an early 1980s Halloween, right at the height of the "Dungeons & Dragons is evil" hysteria that culminated in the TV movie Mazes and Monsters. In this tract, a witch uses the fictional role-playing game "Dark Dungeons" to lure children into the world of the occult. The in-game death of a D&D character (that's Dark Dungeons...wink, wink) leads to real suicide by one child, while another becomes obsessed with witchcraft and demonic possession. 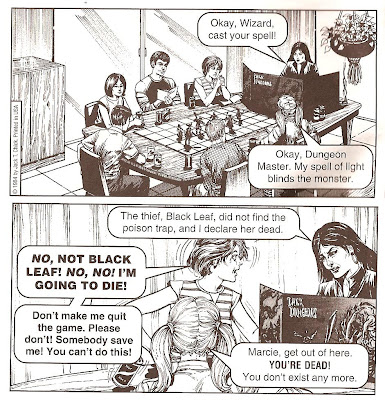 No matter what you think of the message of Chick tracts, they have an interesting look to them and are a unique cultural artifact, making them a fun collectible. You can actually browse and order tracts directly from Chick here. Officially sanctioned flash-animation interpretation of Chick tracts can be found at one of my absolute favorite pop-culture websites Secret Fun Spot.
Posted by Brother Bill at 6:02 PM