The Town Where No One Got Off (1986, Ray Bradbury Theater) 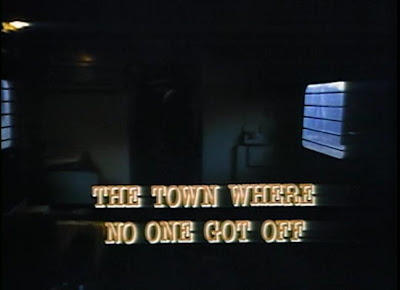 Speaking of Ward Kimball, the Disney animator who produced and directed the Man In Space series (which I previously posted about here), Kimball makes a cameo appearance in my favorite episode of The Ray Bradbury Theater.

Faithfully adapted from the 1958 short story of the same name, "The Town Where No One Got Off" (1986, Season 1) centers around a passenger on a train. Kimball's love of trains, which he shared with Walt Disney, is legend, so it makes perfect sense that he appears in a brief train-themed prologue to the story proper. It begins with a shot of a miniature of Kimball's backyard train station, Grizzly Flats, which was actually mass-produced for model railroaders by the Piko company. 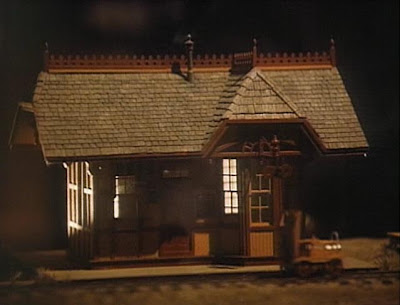 This dissolves into the full-size station, with Kimball as signalman. Ray Bradbury appears as himself, waiting for the next train to arrive. The image is too dark for me to be certain, but the train that finally does arrive could be Kimball's own "Chloe". 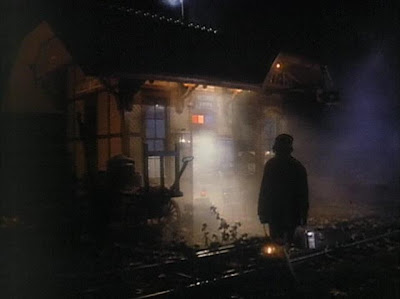 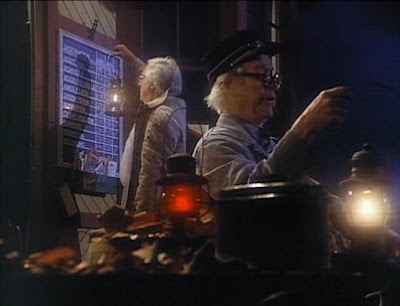 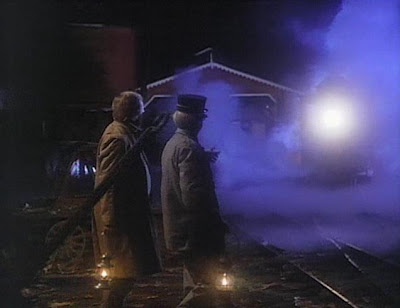 "The Town Where No One Got Off" stars Jeff Goldblum as an idealistic writer who, while staring out the window of a train, muses to one of the other passengers that someday he's going to get off at some random rural town and begin a new life away from big city corruption. 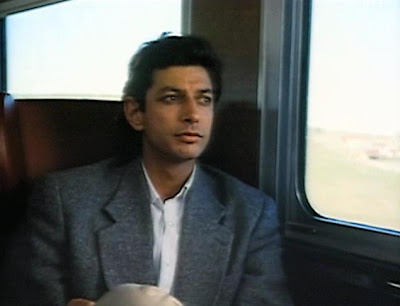 This prompts snorts of doubt from his fellow passenger, who more or less dares him to do just that. Goldblum calls his bluff, has the train stopped at the next little town, and disembarks. 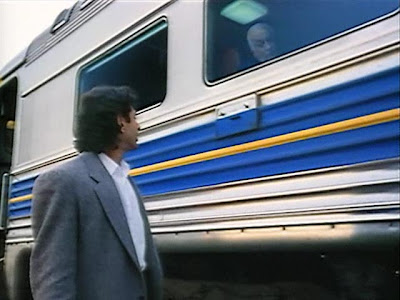 As he strolls into town, he doesn't notice the man who was sleeping in a chair at the station is now following him at a distance. 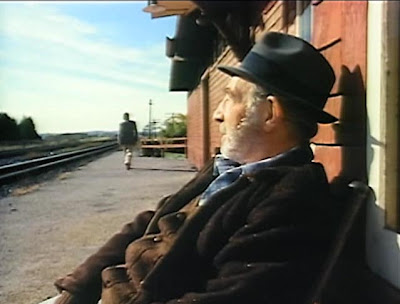 As Goldblum walks down the barren, quiet streets, he gets the distinct feeling that this isn't exactly the friendly little town he imagined. The few people he does come into contact with have no interest in his pleasant small talk. 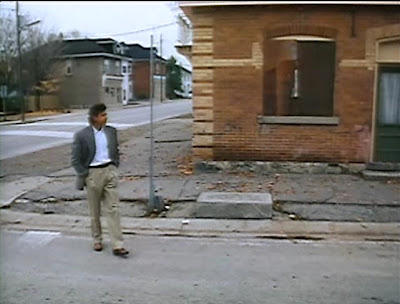 He eventually notices the old man from the station is definitely following him and starts to get a little unnerved. 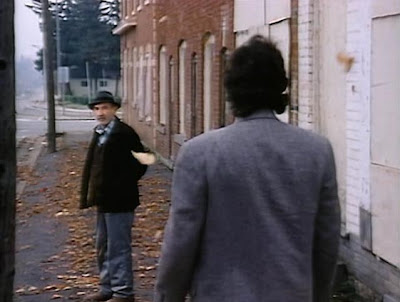 "Been a long time. Long time. Me waiting at that station platform." the old man says.

"Who were you waiting for?" asks Goldblum.

Goldblum and the old man walk together, making pleasant enough conversation, but it soon becomes clear something is not quite right with the old man. He asks Goldblum if he's hated many people in his day, or if he's ever felt that he's wanted to kill somone who hurt him. Goldblum is not put off, conceding that all people have thought of killing at one point or another.

The old man leads him into an abandoned building, where he claims to have a bottle stashed. 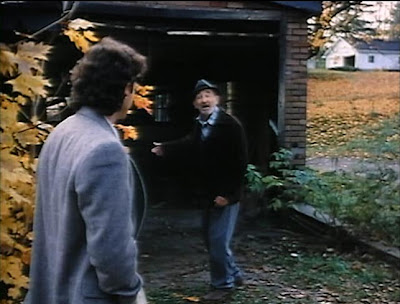 It's here that the old man delivers a chilling monologue, more or less lifted word for word from the original story, about how all the murders you ever felt you wanted to commit but didn't build up in your head, and how "Everybody would like to do one killing in his life, to get rid of that rot in his mind from all the killings that he never did." 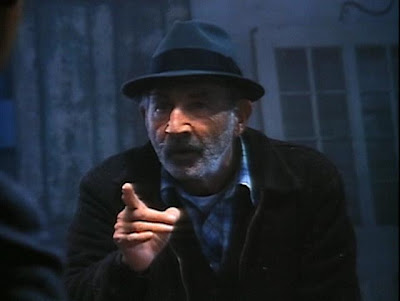 But then, he continues, he had an idea: to wait at the train station...wait for someone to get off, who had no reason to be there, who knew nobody in the town, who wouldn't be missed...

It becomes increasingly clear to Goldblum that there is no bottle stashed in this abandoned building... 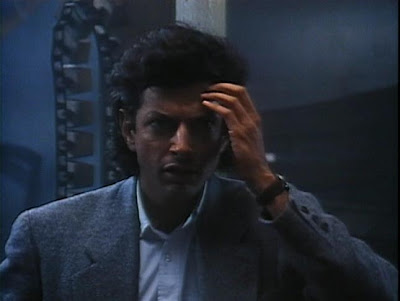 I won't reveal the ending, but only recommend that you see the episode, which is available on DVD in no less than three versions of Ray Bradbury Theater episode collections, found here, here or here.

The original story can be found in a number of Bradbury collections, including A Medicine for Melancholy. 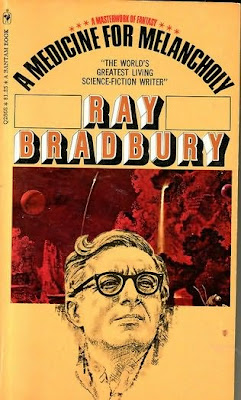 That would be Chloe because it's too small to be the Emma Nevada, his other, much larger steam engine.
Great post!!!