One Moment Of Terror: BURNT OFFERINGS (1976) 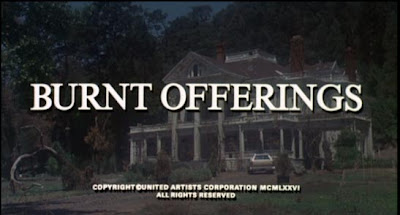 There are some horror films that grabbed me at a young age and never let go. Burnt Offerings (1976) is one of them.

Based on the Robert Marasco novel (which I haven't read) and directed by Dan Curtis (Trilogy of Terror, etc.) Burnt Offerings is long on atmosphere and short on blood and flashy special effects. And unlike other films that don't quite live up to my childhood memory when revisited as an adult (Food of the Gods, I'm looking at you...) Burnt Offerings holds up just fine.

The Rolf family, Benjamin (Oliver Reed), Marian (Karen Black), son Davey (Lee Montgomery) and elderly Aunt Elizabeth (Bette Davis) rent an isolated country house for the summer. The estate, owned for several generations by the Allardyce family, is beautiful, and the price is a steal, so what's the catch? 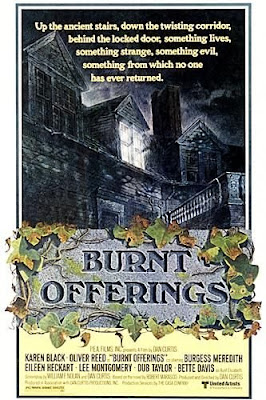 Grandma Allardyce ("hardly a catch...") will be staying in the house as well. But not to worry, she's very old, and spends all her time locked away in her bedroom. Just leave a tray of food outside her door three times a day, and you'll hardly know she's there at all. Have a nice summer!

Upon arrival, Marian assigns herself the duty of caring for Ms. Allardyce, forbidding anyone else from contacting her or even entering her sitting room. Was this really Marian’s idea, or is she being somehow manipulated by Ms. Allardyce, who needs to isolate Marian from the rest of the family as the first step in a larger plan? 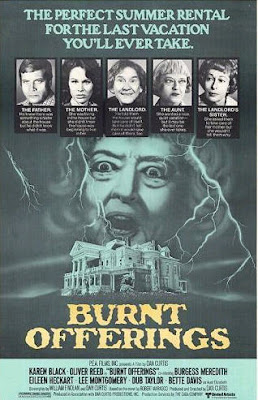 One thing I noticed about Burnt Offerings is there is no laborious back-story provided to rationalize the hidden evil that permeates the house. Just a a vague, but steadily mounting, atmosphere of dread, that only grows as the family explores the grounds, and discovers unsettling artifacts that suggest a sinister history.... a pair of glasses with what appears to be a bullet-hole in one of the lenses is found at the bottom of the pool... 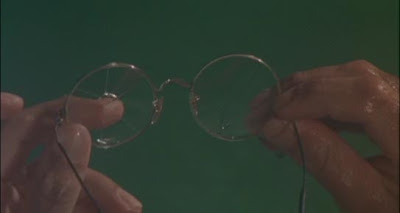 ...a rusty child’s bicycle lies forgotten among the weeds of the family cemetery... 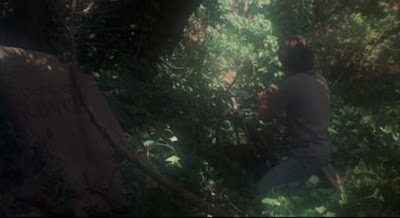 ...and a collection of old photographs of several generations of the Allardyce family (or perhaps of previous renters) are propped up across a desk like little tombstones. 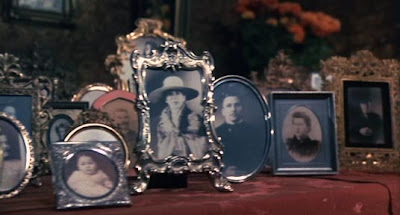 When Marian, exploring her sitting room, first opens Allardyce’s music box, the melody it plays has an almost hypnotic effect on her. It’s as if she’s being reminded of a tune she already knew, but had forgotten. 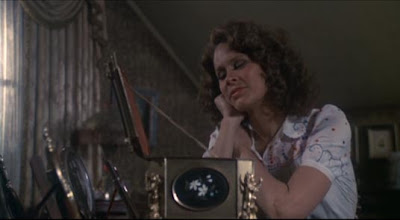 Even though we’re hearing it coming from the music box for the first time, its melody was used earlier in the film’s score, so it seems strangely familar to the audience as well. The seduction of Marian has begun.

The house has different plans for the other members of the family. Nightmares that haunted Ben as a child, of an inappropriately grinning chauffeur at his mother’s funeral, have returned to disturb his sleep--and sometimes also his waking hours, as vivid hallucinations. 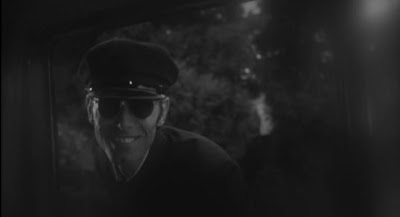 At other times, the house seems to have awakened an alternate personality in Ben. In one disturbing scene, swimming pool horseplay turns unexpectedly violent as a suddenly emotionless Ben robotically tries to drown his son. Davey only escapes with his life when he bloodies his father’s nose with a scuba mask. 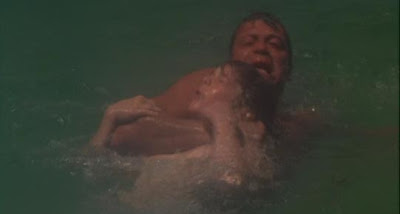 For me, this scene tapped into a primal anxiety I suppose most children have about inadvertently angering their father--that protecting and powerful figure that can seem mortally threatening when angered.

Marian is becoming increasingly withdrawn from the rest of the family, her caring for the house and Ms. Allardyce having trumped any other concerns. One evening Ben tries to get romantic at the pool, but Marian is not interested. When he persists, she relents, until noticing the light in Ms. Allardyce’s roof-top window. The thought that Allardyce might actually be watching them is almost lurid. Conceding to Ms. Allardyce’s authority over her, Marian flees back to the house. 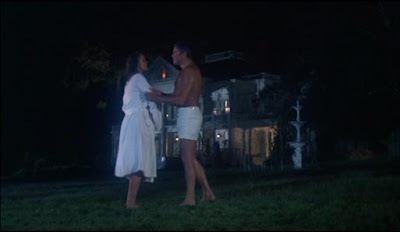 The elderly Aunt Elizabeth, who has so far been energetic and cheerful, slowly finds herself drained of energy, and soon bedridden. In one chilling scene, Ben is at her bedside when he sees the hearse from his nightmare pull up to the front of the house. We hear something coming up the stairs... THUMP, scrape....THUMP, scrape...THUMP, scrape... as Ben and Elizabeth cower in absolute terror. 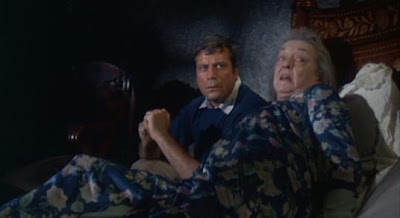 As the family falls apart, the house gains strength. Plants that were withered now bloom. Faded, cracked paint seems to brighten and renew itself. One night, all the silent, still clocks in the house suddenly right themselves to midnight and begin ticking. It’s as if the house’s heart has begun beating. 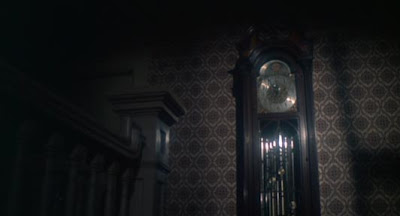 But the one moment of terror that stands out above the rest is towards the end. After several brushes with death, the spell the house had cast over the family seems broken, and they make the decision to leave once and for all. But there is no frantic flight from the house amongst an onslaught of supernatural forces, as you might expect. When they leave, it is on a calm, sunny afternoon. The family walks quietly to their car, like shoplifters trying to exit a store without drawing attention to themselves. 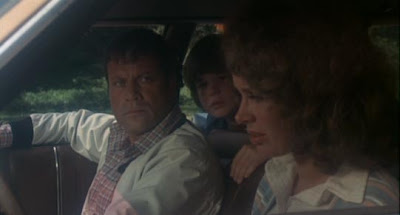 The boy even seems somewhat confused by their calm demeanor, when he asks “I thought that we were gonna go?" and Marian whispers back, “We are.” There is no sinister music on the score, in fact no music at all, just the pleasant chirping of birds.

They are about to drive away when Marian pauses to consider the fate of poor Ms. Allardyce, who they forgot to inform they were leaving. They can’t leave a poor old woman alone in the house without at least leaving their phone number. She makes the decision to make one final trip to Ms. Allardyce’s room.

It’s a moment that harkens back to every myth and urban legend in which the difference between a survivor and a victim comes down to one moment of misjudgment, born of whim or weakness. Still, we are given no hint that Marian is heading for impending doom. Even though we know evil lives here, the house appears peaceful and calm as she makes her way up the stairs. 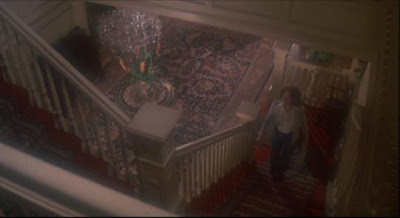 Meanwhile outside, Ben and the kids are waiting...and waiting...and waiting... Director Curtis does not rush the action, letting tension fester as the scene unfolds at an excruciatingly measured pace. When Ben finally decides to go in after her, you want to scream at him to cut his losses and get the hell out of there! And yet the house still seems so quiet, so calm... 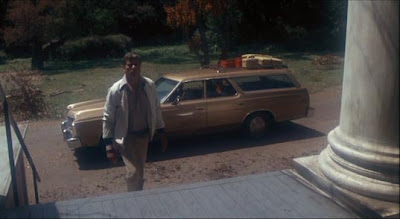 Which only makes the suddenly violent ending all the more shocking... 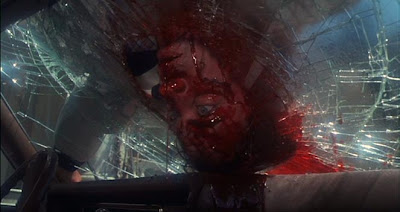 Burnt Offerings was filmed on location at an actual historic house, the Dunsmuir House, in Oakland, California, which is still available for tours and private events. Pool parties not recommended.
Posted by Brother Bill at 8:44 PM

This was another one you insored me to watch, although by the time I watched it a few nights ago I only remembered the title.

It left a knot of "unsettled" in my belly for almost an hour. An excellent movie, and I thank you for recommending it.

Need to watch this again as an adult.

When I first saw this on tv as a child the swimming pool scene upset me so much that I started crying and my dad made us turn it off, much to my older sister's chagrin. It didn't tap into an innate fear of my father, but quite the opposite. My father was gentle, kind and 100% dependable. That's what made it so horrifying, to be forced to contemplate a loving father suddenly becoming a different person, a violent stranger, your real father suddenly disappeared, leaving you alone with a psychotic doppelganger. Nothing could have scared me more as a child. The world suddenly came unhinged. A couple years later I watched the rest of it, and that smiling chauffeur has been sending chills down my spine for the past 40 years.

Mrs. Allerdyce's completed transformation into a being capable of throwing a 220 lb. man through a window with bare hands is nothing short of malevolent. The scene setting, music and tension carry this movie in ways modern horror flicks have forgotten. When I was a kid the grinning hearse driver gave me terrible chills. If you haven't seen it, I recommend it. I watch it every couple of years to remind myself of what good movie making is all about.