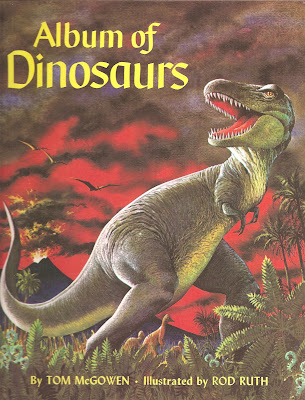 I've always considered dinosaurs to be a sub-category of monster. They've always carried that aura of the fantastic, as wondrous and terrifying as any dragon, sea-serpent or other monster from mythology or the imagination.

Imagination isn't really required any longer to envision living, breathing dinosaurs. Modern productions like the Jurassic Park series or Walking With Dinosaurs have given us dinosaurs that seem more real than anything I ever dreamed up as a child. Yet in doing so, I think they robbed the dinosaur of some of its mythic grandeur, reducing them to just ordinary, albeit extinct, members of the animal kingdom.

But lets step back in time just a little bit. Pre-CGI and pre-Jurassic Park, dinosaurs in film were never very convincing. There were some impressive stop-motion dinosaurs created by Ray Harryhausen (Valley of Gwangi, One Million Years B.C.) or Jim Danforth (When Dinosaurs Ruled the Earth) and traditional cel-animated specimens (Disney's Fantasia, Hanna Barbera's Valley of the Dinosaurs). There were also dinosaurs realized through costumes or puppets (The Last Dinosaur, The Land That Time Forgot). And finally, real live iguanas or other reptiles, dressed up with horns and fins and photographed up close to emulate their prehistoric ancestors (When Dinosaurs Ruled the Earth again, Journey to the Center of the Earth). While they all made for exciting spectacle, they rarely seemed very realistic. 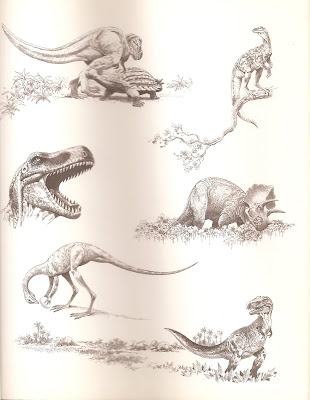 Which is what made Album of Dinosaurs (1972) such a great book. For a kid in the 1970s, the beautiful pictures contained here (illustrations are by Rod Ruth, of Baleful Beasts and Eerie Creatures fame) were like a window into the past, presenting dinosaurs more realistic than could yet be found in any film, while still retaining that intangible mythic, larger-than-life quality that elevates them above mere animals.

On a more practical level, the book’s large size and smooth hardcover made it the perfect portable work-surface, which means I logged countless hours staring at that magnificent cover T-rex while it peeked over the top of whatever writing or drawing project I was working on.

These scans don’t really do the illustrations justice. 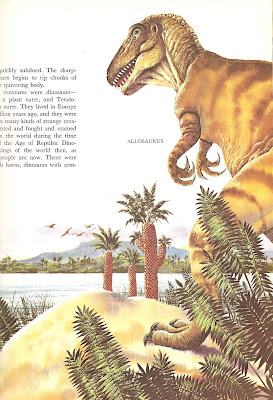 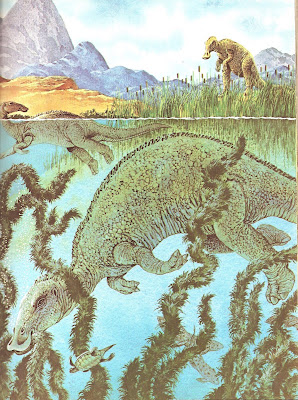 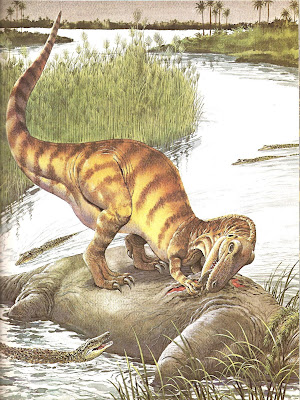 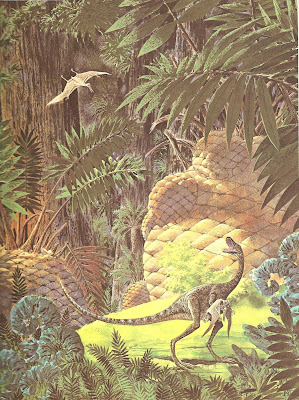 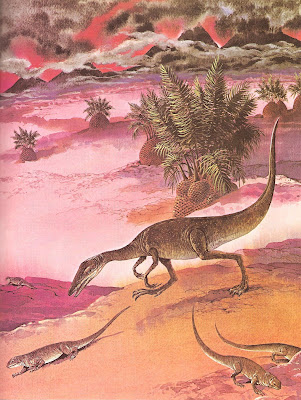 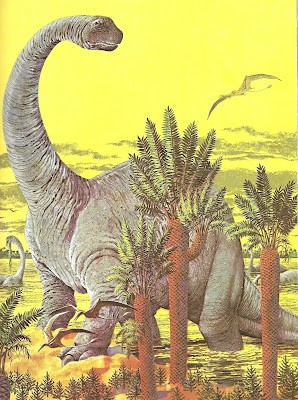 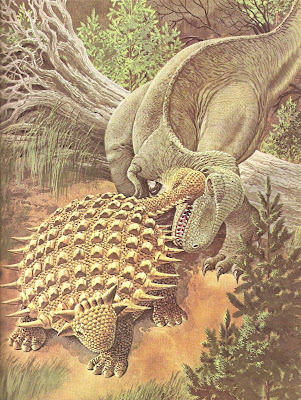 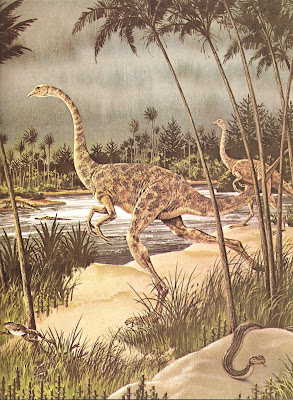 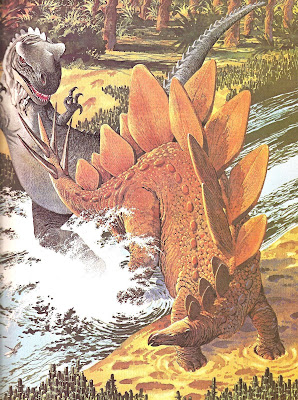 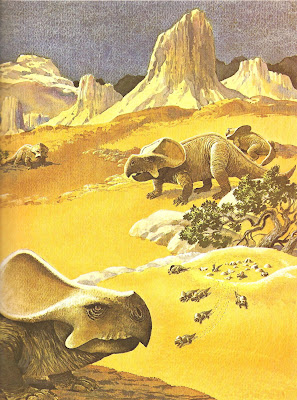 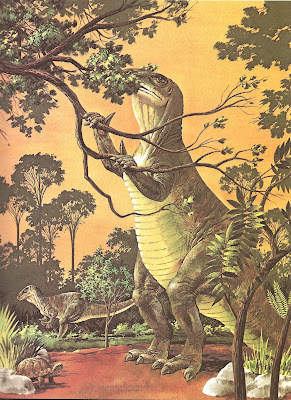 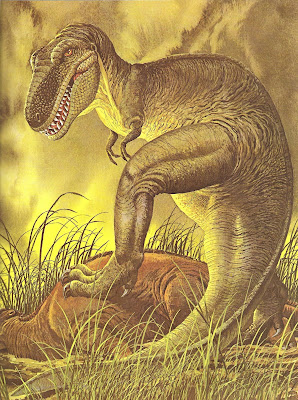 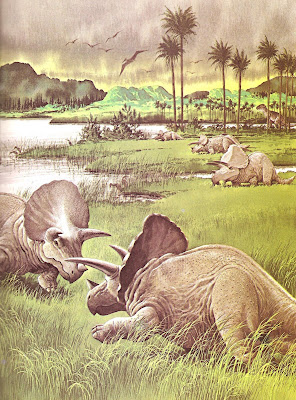 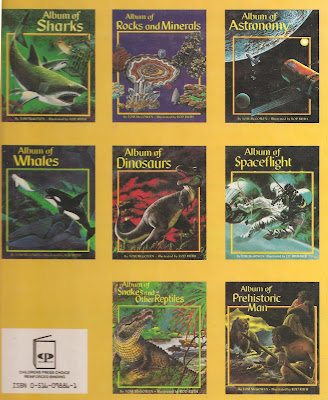 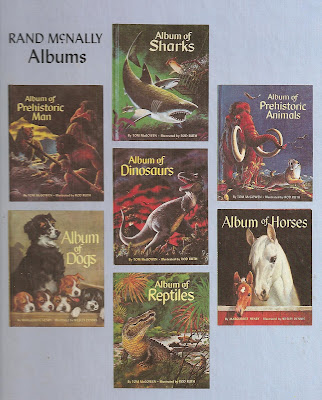 Wow, I've been looking for this book forever, it was my favorite dino book as a kid but I could never remember the title. Thanks for posting this, I've always wanted these images and now know which book to go searching for on ebay and whatnot.

I still have my ablbum of dinosaurs book from the seventies! I also had (and still do) the ALbum of prehistoric mammals, album of prehistoric man, album of sharks, album of whales, alum of astronomy. Don't think I remeber album of rocks and minerals or spaceflight, and don't think I'ds be interested. I remeber an album of birds, but by then, my folks said I was too old to have it. The Dinosaur and Mammal Albums were once conbined into an omnibus volume, wiht a brand new very cool-looking Rod Ruth cover. But since the inside was just the same, i didn't get it.

It's been eons since I've seen this book, but I remembered it well on seeing these scans. Thanks!

This, and the How and Why Wonder Book of Dinosaurs were the best dino books ever- at least from the perspective of a 1st grader that's been hooked ever since. Ruth's illustrations are simply dazzling and you are correct that the scans don't capture some of the vibrance. I still have my copy from my birthday in 1972 and read it to my son all the time.

Yes, I've also been looking for this book! I'd forgotten the title but my God those illustrations. Really fired my imagination as a kid. Thanks for scanning!

Mars Will Send No More said...

Nice scans! We love this book and have been thinking of scanning the whole thing cover-to-cover. We got Ruth & McGowen's Album of Prehistoric Animals in 1977 and have since collected most of this series.

This was the first book I ever bought with my own money, so it has a very special place in my heart- as well as on my book shelf. Thanks for featuring it, here.

Got this one for Christmas in 1975 from my Grandmother. Remember trying to draw and trace many of these images. Have the original, but is missing a few pages, so I might look for another copy on the net. Used to stare at those pictures for ages.

Got this book in Croydon December 1976 at W.H.Smith's . Had it for years - first proper Dino book I had . Stolen by a supposed friend in early 2000s . Know they were bit bonkers but this unforgivable as done on purpose .