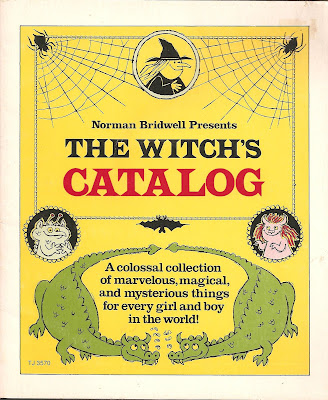 This is a fun little book by Norman Bridwell, of Clifford the Big Red Dog fame (he also authored a series based around a witch character who looks very similar to the witch pictured here). There are all kinds of magical items to order in "The Witch's Catalog" (1976). 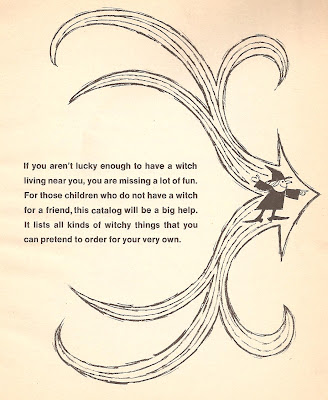 The conceit that you are not merely reading about the magical items but are actually in possession of the catalog itself that a witch orders from elevates the whole experience... you are not merely holding a book, but an artifact from the supernatural world!

For the junior chef, there's this Witch's Cookbook, featuring recipes for stewed spider supreme, baked bats, scorpion sauce, and other delights. May as well get the Witch's Kitchen Kit while you're at it--it's received the Good Witch's Seal of Approval. 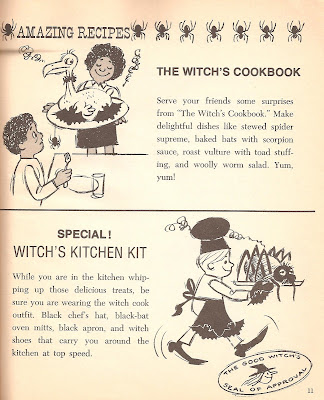 Animal lovers can order this birdhouse for bats that is chemically treated to attract bugs... 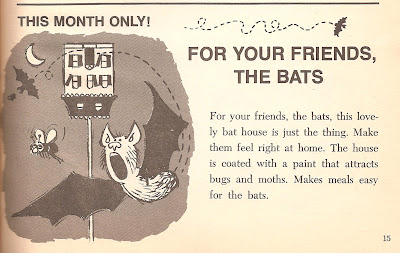 If you have a green thumb (or know a graveyard where you can dig up someone else's) there's the Ghastly Garden kit.

This next item is being marketed to the girls, but it looks like something the boys would enjoy just as much. This Haunted Doll House comes complete with a terrified family of four. 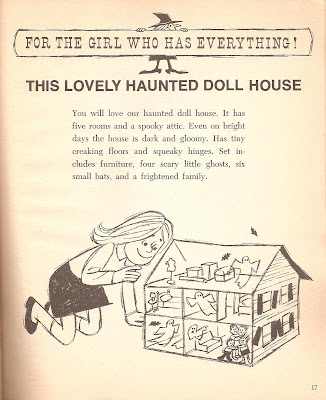 I don't totally get this next one. Seems a witch's night light would attract "creepy things" that "go bump in the night", not repel them, but what do I know about retail?

And it's not all scary stuff either. This helpful Magic Pencil does your homework, while the Magic Pillow sends you pleasant dreams of puppies and ice cream (although what a witch would find pleasant about either of those things is beyond me). 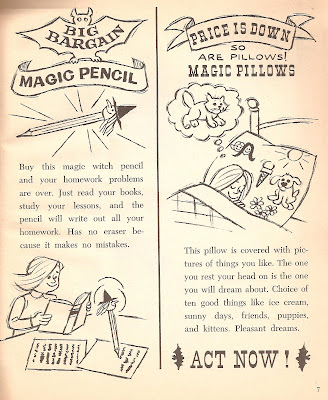 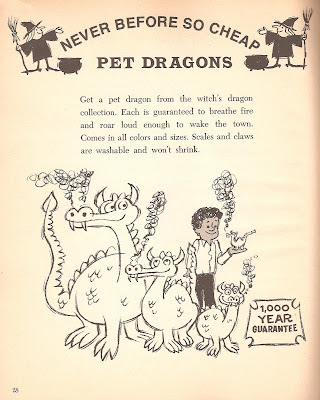 (If you thought you saw some of the bigger kids smoking from a dragon-shaped pipe after school, this might explain it. )

Until you add on all the extras... 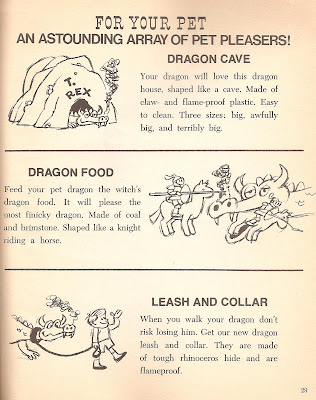 So how exactly do you order this stuff? This page explains. Note the all-caps disclaimer regarding the order form: "DO NOT FILL IT OUT! DO NOT TAKE IT OUT OF THE CATALOG!" Yea...especially if you don't want to get an angry note sent home from the school librarian. 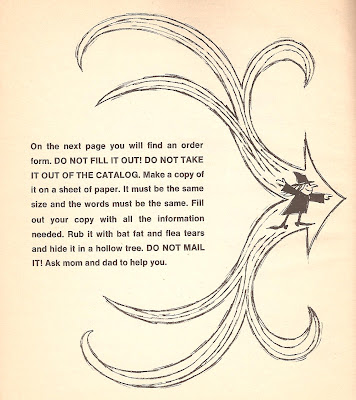 The "order form" is only a few inches wide (only slightly larger than it appears in this scanned image) and the text is deliberately obscured to prevent anyone from producing an actual copy. Because what if someone really did successfully recreate the order form, rub it with bat fat and flea tears, hide it in a hollow tree, and then never actually received their pet dragon? Lawsuit! 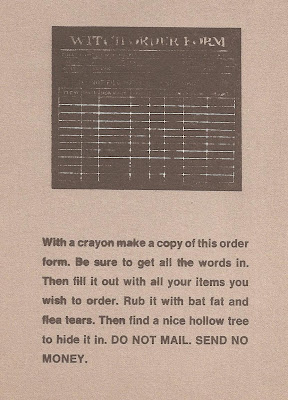 It's funny I couldn't remember the name of this book but I read it when I was a kid, and now that I have 2 boys I remembered how much I loved this book, so I googled "bat fat and flea tears" and your site came up! lol!
I'm so glad you have this on your site, I finally found the book online and ordered an out of print copy. I know my boys are going to love it as much as I did.
I distincly remember thinking I had a hollow tree and a dog but where do I get bat fat? lol!!!

I asked my mom she said boil a bat