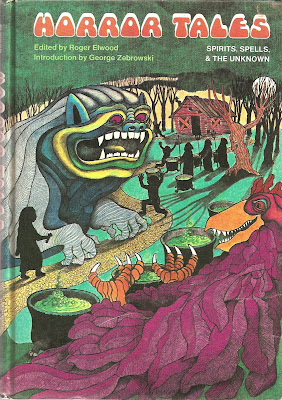 Horror Tales: Spirits, Spells & The Unknown (1974, edited by Roger Elwood, illustrated by Robert Baumgartner, with an introduction by George Zebrowski) is the fourth and final entry in the unofficial series of children's horror anthologies published by Rand McNally in the 70s (the others being Monster Tales, Tales of Terror and Baleful Beasts and Eerie Creatures. If there are any other books that belong with these four, I'm unaware of them.)
UPDATE: I'm going to add Science Fiction Tales and More Science Fiction Tales to this unofficial series of books (both are edited by Roger Elwood and illustrated by Rod Ruth!) 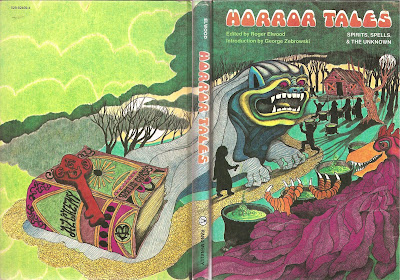 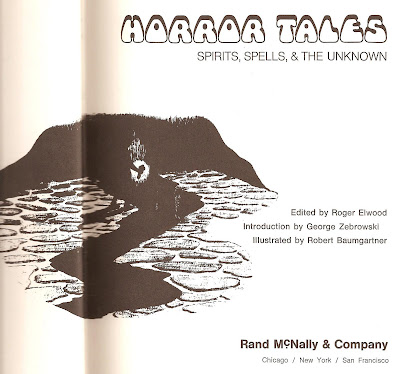 The illustrations are suitably creepy and once again it's the first story that is my favorite. 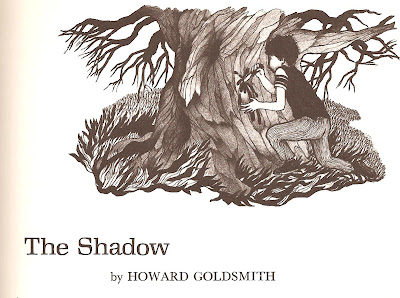 In "The Shadow", a boy Jeff and his parents inherit their recently deceased Aunt Abigail's old house which sits on some wooded property just outside of Salem, Massachusetts.

When they first arrive to the house, which turns out to be a bit dilapidated, they are taken aback by a prominent tree in the yard.

A solitary elm tree loomed before us about ten yards away. The dark silhouette, tall and gaunt, stood out starkly against the brightness of daylight. Pieces of warped bark jutted out in thick, brittle strips. Cobwebs were strung across the leaves, and insects flitted in nervous, meandering motions. Branches crossed and recrossed in gnarled and knotted patterns. And two long, angular limbs reached toward the sky like the arms of someone in agony.

The tree is surrounded by the withered, twisted remains of other trees that were planted nearby but died. The family soon learns that the tree is the resting place of a Colonial-era witch, "Elvira", who, with her dying breath, cursed anyone who ever harmed the tree. 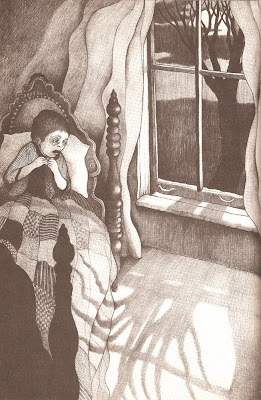 Young Jeff, being a modern and sensible boy, decides to challenge superstition by stabbing the tree with his pocket knife. That night, he notices the shadow of the tree cast by the moonlight is pointing right across the yard towards his bedroom, looking like two gnarled hands inching closer, closer, until they eventually reach his window and right into his room...

In an exciting finale Jeff desperately tries to chop the tree down in the midst of a thunderstorm before the ghost of Elvira can get hold of him. Great stuff. 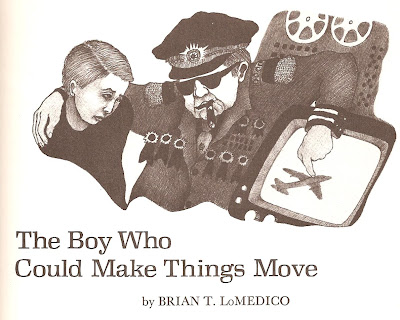 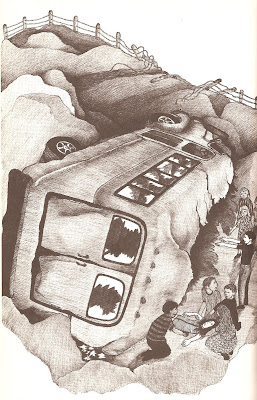 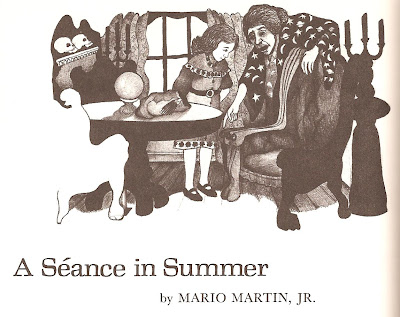 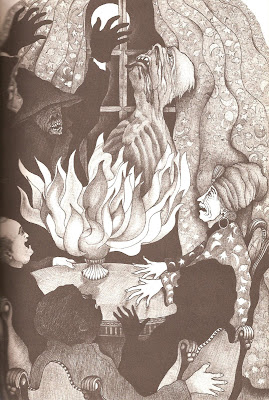 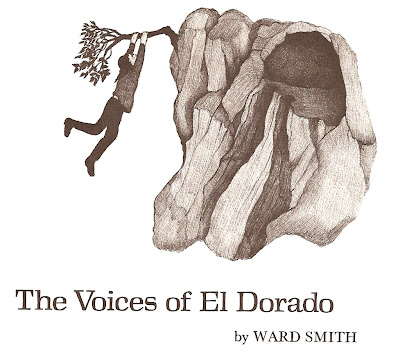 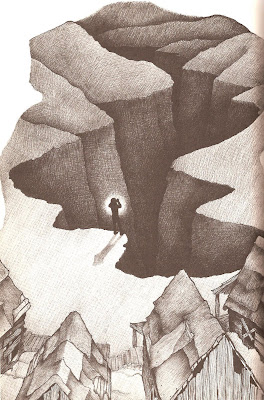 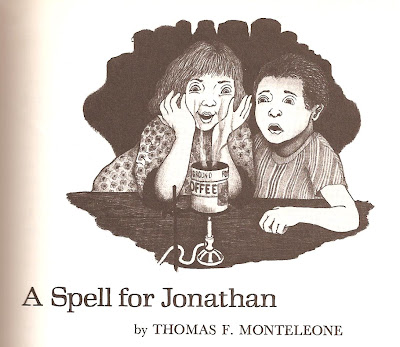 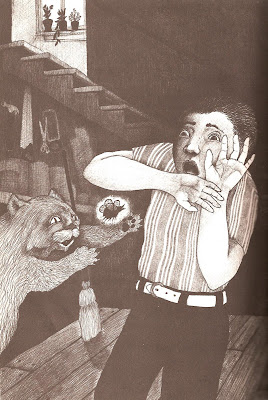 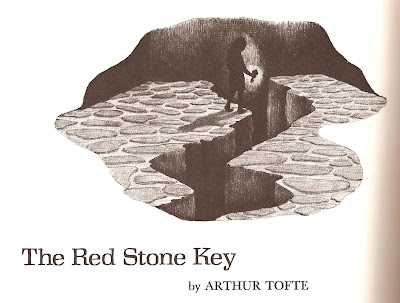 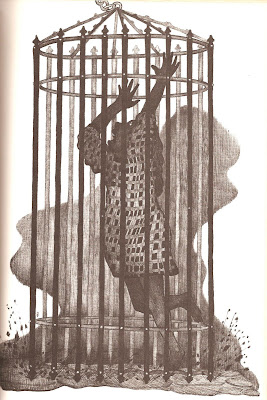 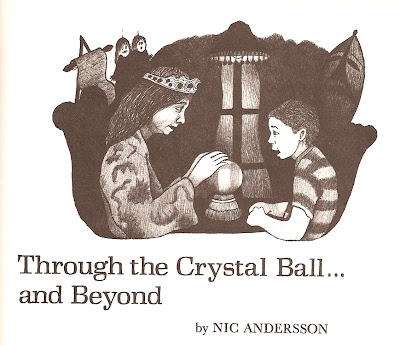 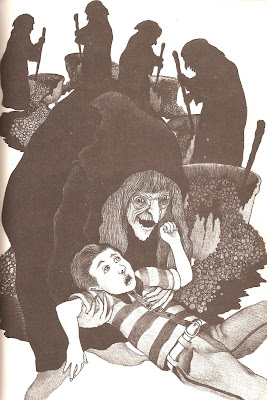 Here's how all four of the books look side-by-side on the shelf. Tell me they don't look like they belong together as a series!

Thanks for bringing "Tales of Terror" to my attention, I have the other three books but didn't know about the fourth. I actually have an additional 2 volumes that you don't mention; "Science Fiction Tales" & "More Science Fiction Tales", both illustrated by Rod Ruth & published by Rand McNally with stories written by the same authors featured in "Monster Tales" & "Horror Tales"

This may be asking too much, but is there anyway you could post or email me photos of the story "The Boy Who Could Make Things Move"? I'm a senior film student from Pennsylvania now living outside of Las Vegas and I want to make a short film about this story. I apparently lost this book somewhere. What can I do to get this from you? I would be most appreciative.

Zak, are you just seeking the complete text of the story?

What did you think of Arthur Tofte's "A Thirst for Blood"?

Amazing! I have tried to cipher out the source of my (vague, ephemeral, apparently devoid of a single decent keyword) memories regarding "A Spell for Jonathan" for years and years now, but coming across the cover image on your site (after doing a search for "Schoolastic horror 70's") finally did the trick!

Couldn't be happier -- thanks so much! Heh, now to try & find a copy for under $30 or whatever nutty sum it seems to be going for.

(Oh and hey, thanks for all of the random Scar Stuff linking on here as well!)

Jason, you should know that thanks to your excellent Scar Stuff blog, I was able to introduce some children in the family to the classic recordings of The Skinny Toe, The Dare, The Golden Arm, Dark Dark, The Hitchhiker, The Cradle That Rocked Itself, etc. (I was lucky enough to discover your site before you lost all the MP3 downloads...) so the fondness and affection that we have for those records has been successfully passed down to the next generation.

Hi again! I kind of can't believe it's been four years since I posted this and google never notified me that you responded. Anyway my film career has taken off, and sometime I would still like to revisit this short story and turn it into a short film! would it be possible for you to email me the text of the story? Even just a couple photos from the book using your phone? :)

I actually found a hard cover copy of this book on abebooks.com several years ago. I had lots of trouble tracking it down, because all I could remember of it from the school library was the title "Horror Tales". I ended up calling my primary school library - they didn't have the book anymore but fortunately they had the details on record. I was over the moon when it turned up in the mail - in good condition too!

I didn't realise that there were companion books - I'll look them up!

And Zak, I can help you with a copy of that story. Just need an email addy!