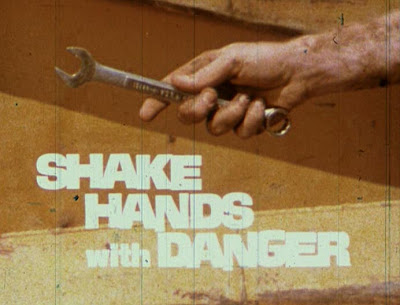 I've posted previously on classroom scare films. The Haunted Mouth used a haunted house to frighten children into brushing their teeth regularly, and The Boy Who Liked Deer taught us the dangers of sharing your love of poet E.E. Cummings with the wrong crowd. 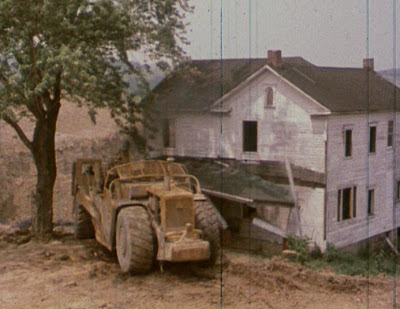 But Shake Hands With Danger was made for a classroom of a different sort. It's message of observing proper safety procedures and avoiding distractions while on the job, "whether you're using a grease gun or a welding torch", is intended for adult construction workers. Directed by educational film veteran Herk Harvey (whose sole feature film credit was a different kind of scare film altogether... the 1962 cult classic Carnival of Souls!), I can't overstate how much fun this is. 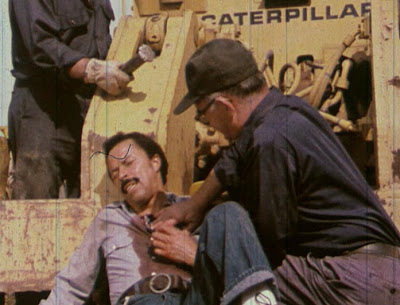 In a series of grim vignettes, we'll see careless workers scalded with hot oil, set afire when their cigarette meets gas vapor, T-boned by runaway equipment, rammed into buildings, feet crushed, fingers severed, and (most disturbingly) a hand amputated. All set to a catchy country song with lyrics that comment directly on the action. 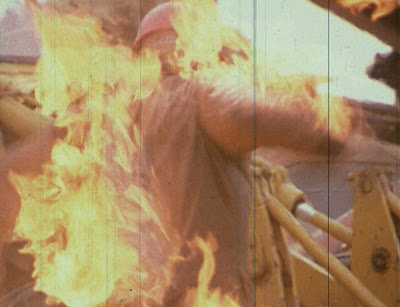 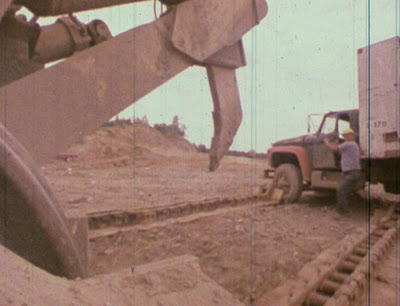 You see, Shake Hands With Danger isn't just the name of the movie... its the title of a song! Written by Jim Stringer and sung by Charles Oldfather (whose only other screen credit is a bit part on made-for-TV post-apocalypse drama The Day After), the song drops in strategically throughout the film's 25 minute running time. 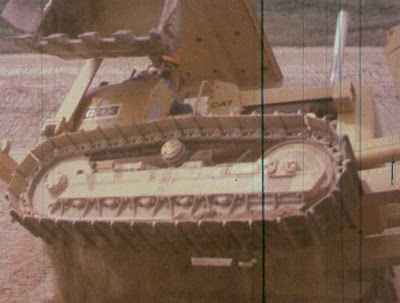 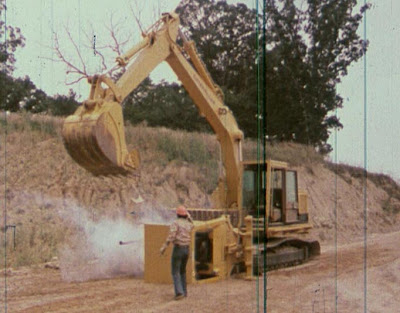 Imagine (...trying to describe the singers voice; scanning my limited knowledge of country music; landing on Johnny Cash...) Johnny Cash belting out lyrics like this:

Shake hands with danger.
Meet a guy who oughta know.
I used to laugh at safety,
Now they call me Three-Finger Joe.

Shake hands with danger.
Find it anywhere you choose
Be careless for a moment,
Spend a lifetime with the blues.

What follows is scene after scene in which a worker, either out of hubris, carelessness, or impatience, ignores safety procedures and ends up paying the price.

This guy was too afraid to admit he wasn't comfortable operating the bulldozer, and after giving the "okay" sign to his boss... 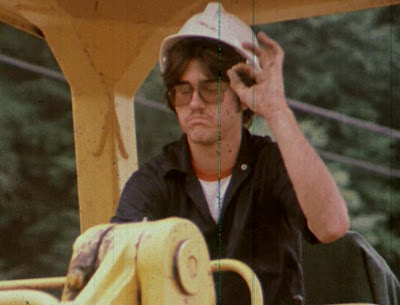 ...ends up nearly flipping the boss's truck over! 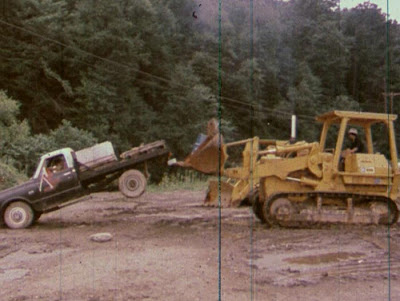 But he got off lucky compared to our next victim, who climbs high up on a piece of equipment to change out an O-ring... 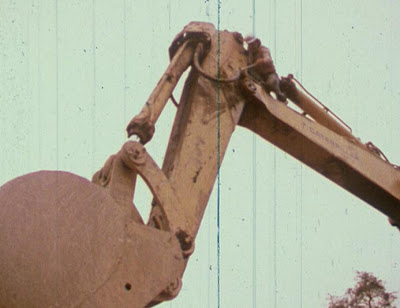 ...only to slip off and tumble to his death! 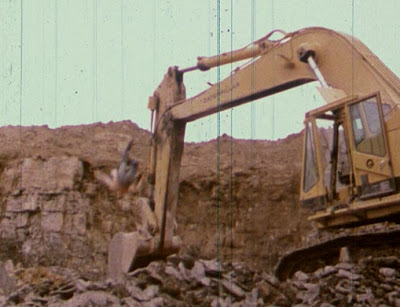 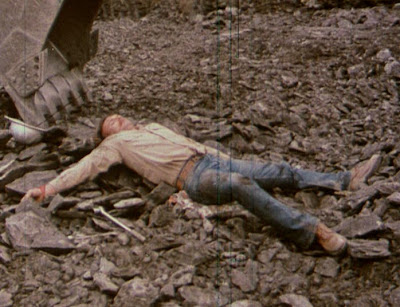 Shake hands with danger.
Take a chance that you won’t fall.
You’ll save yourself a minute,
But you may damn well lose it all.

In this next scene (which doesn't seem nearly as disturbing in screen caps as it does in motion), a worker decides to a take a shortcut and use his hand to grease a hinge. 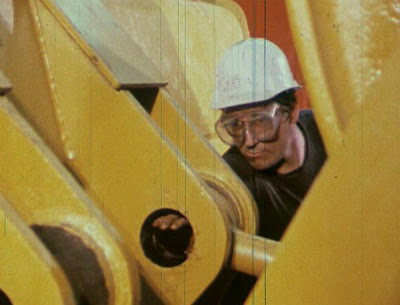 The operator is distracted by a wasp and accidentally activates the equipment, severing the hand right in front of our unflinching eyes! 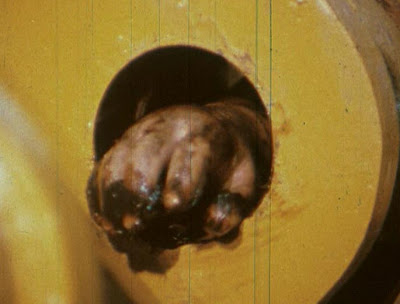 Our raconteur narrator informs us that the unfortunate worker would "give anything to go back and do it the right way."

Perhaps the best segment is a mini drama pitting the "old timers" (right) against the "greenhorns" (left). Seems some of the experienced workers adopt an attitude of letting the newer, inexperienced guys learn the hard way. In this scene, he's failed to alert the newbie not to lean against a hot clamp... 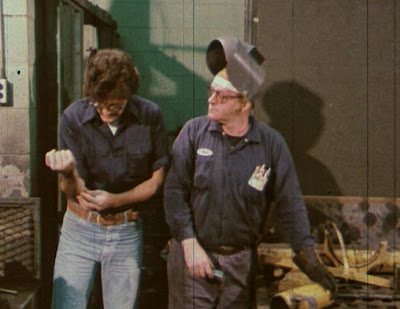 ..leaving him with a permanent grisly scar on his forearm. 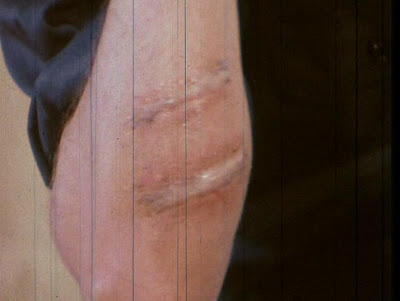 But in a delicious bit of karma, the "old timer" fails to observe the safety gap while grinding a piece of metal... 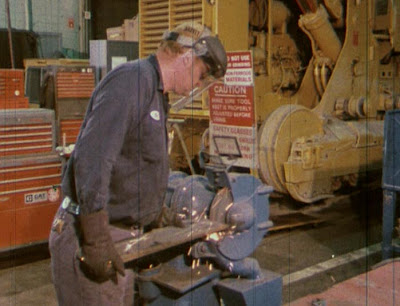 ...and ends up crushing two fingers, blood dripping in strings from the wound. 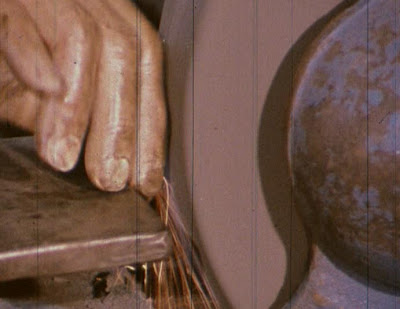 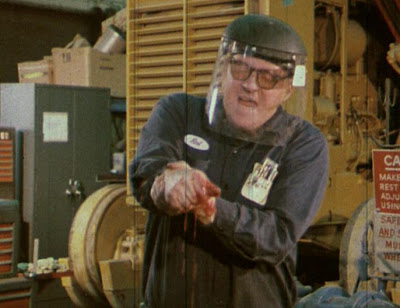 It's at this point we learn the identity of our singing narrator. Music please!

Shake hands with danger.
Step right up and say "Hello".
Grindin’ wheels and metal,
Are what made me Three-Finger Joe.

Shake hands with danger,
And friends I used to know.
Compared to them I’m lucky,
To be JUST Three-Finger Joe.

Shake Hands With Danger is available on DVD in a collection of job-related films called On The Job, part of The Educational Archives series.

The AV Geeks website has a clip of songwriter Jim Stringer performing Shake Hands With Danger in a live venue (although his delivery in that clip lacks the gravitas of Charles Oldfather's performance from the film.) 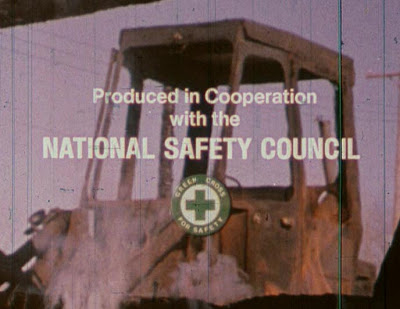 Enjoy your blog. I remember a lot of the things you post about.

This film is really fun to watch with a group of friends, especially during the cringe-inducing moments that you highlighted. Thanks for the post.

l noticed that the man injured while using a sledgehammer to hit a battered chisel looks like Richard Pryor, the comedian.