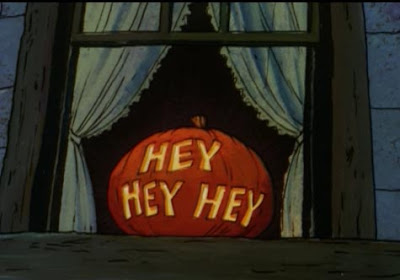 Fat Albert was a show I'd watch regulary every Saturday morning, and enjoyed despite the fact that I had no idea at the time who this "Bill Cosby" guy was, and why he was the sole live-action character in an otherwise animated series. 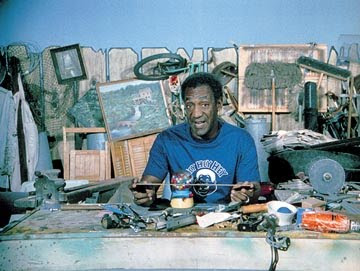 Fat Albert's Halloween Special premiered in 1977, and stood out from other Halloween specials of the day, not only because it featured kids wandering around gritty urban streets that were just a little threatening to this 7-year old kid from the suburbs, but also because their world seemed populated by adults who were hostile to kids. 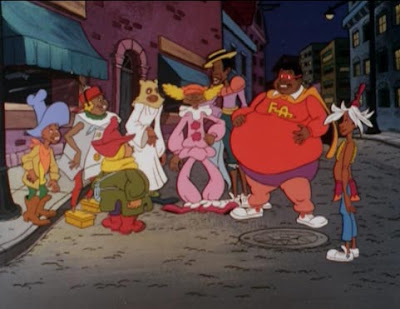 It starts when the kids go Halloween costume shopping at the Root'n Rummage Emporium. The shopkeeper barks at them angrily from behind the counter when they ask for help. 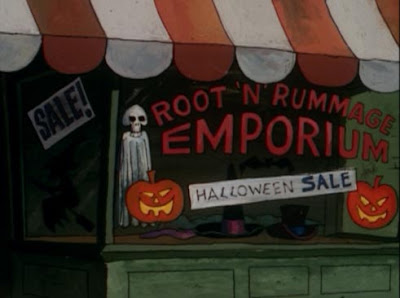 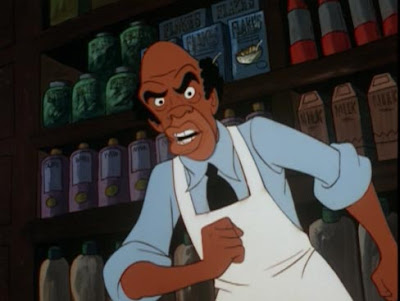 But the kids, perhaps used to being yelled at, aren't even bothered. Further back in the store is the feared and despised Mrs. Bakewell, who glowers at the kids for no particular reason. 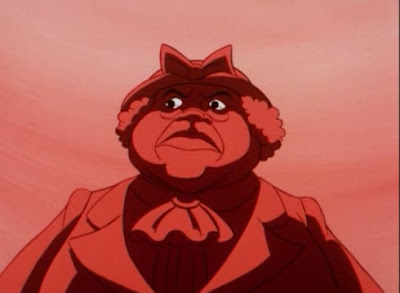 She lives in a spooky old house near the graveyard, where she can be seen looming ominously from an upstairs window later that night. 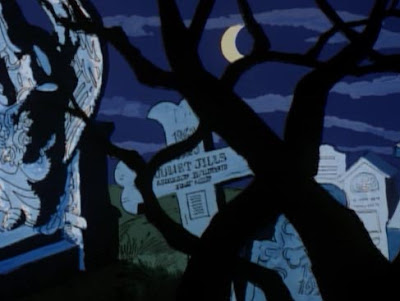 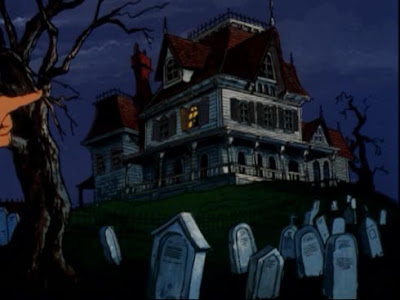 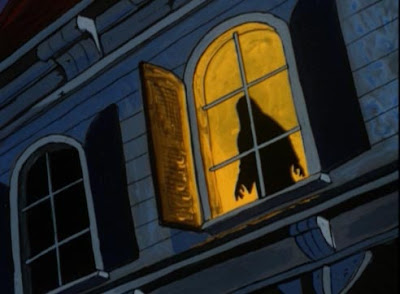 After being terrified by their friend Devery, who pounces out of a crypt costumed as a witch, Dumb Donald (whose identity is concealed EVERY night of the year, not just Halloween, by a stocking cap pulled over his face) announces their intention to spend this Halloween night "spooking old folks." 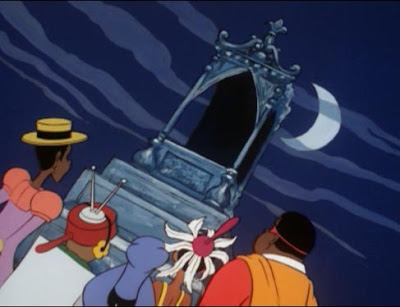 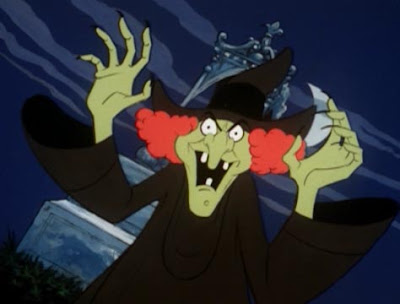 Fat Albert, forever the voice of reason, advises against it... 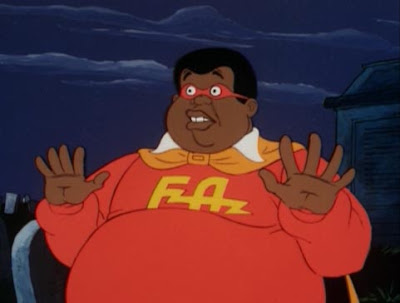 Next, the gang heads to the local movie theater for a twilight showing of "Space Squids that Ate Pittsburgh", where they encounter yet another hostile adult, "Searchlight" Johnson, who scowls at them and warns them to keep their feet off the seats and their lips zipped. 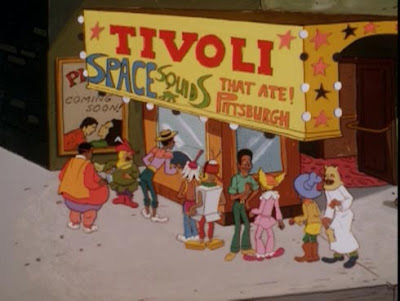 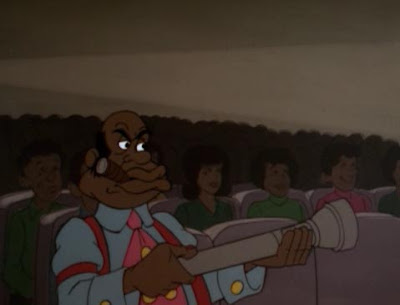 We soon understand why ol' Searchlight is such a sourpuss, when he has to chase Fat Albert and entourage out of the theater for causing too much commotion. Their next encounter is a baffling visit to Mudfoot Brown, an older man who lives out of a shack pieced together from the back end of a car, a rowboat, and an old refrigerator. 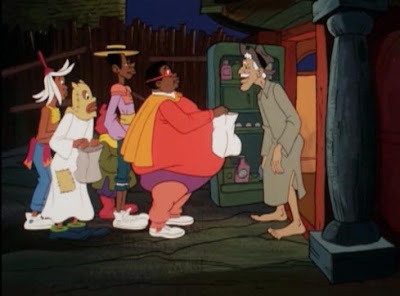 Mudfoot, who seems a bit out of it, proceeds to take the kids' Halloween candy while rambling incoherently about the good old days! The kids aren't bothered by his bizarre behavior, but I couldn't help but wonder if this guy was competent enough to be living alone, and should maybe look into an assisted living situation. 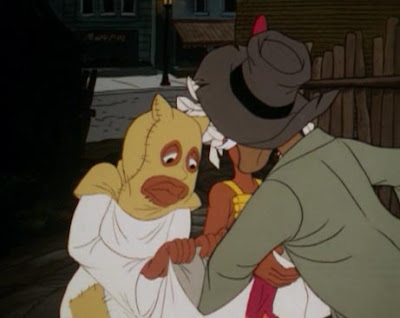 The climax of the night is a spooky visit to Old Lady Bakewell's mansion, where it turns out, of course, that she's really just a nice old woman, who welcomes their visit with soda and candy. 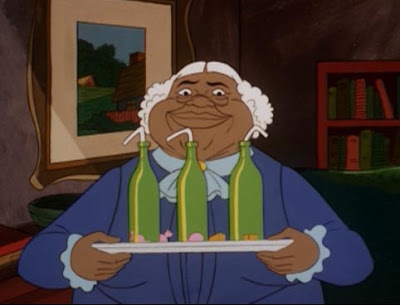 But there's one more scare waiting this Halloween night... Devery's brawny and agitated FATHER, who shows up out of nowhere to bring his grounded son home. I'm not sure what punishment awaited him once they got there, but I was sure glad he wasn't MY Dad! 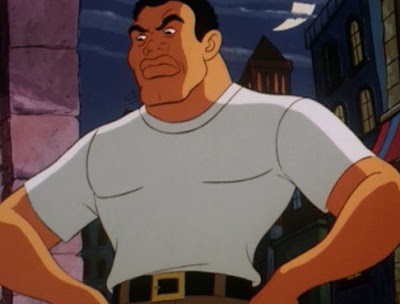 Available on DVD here.
Posted by Brother Bill at 11:21 AM

Vague memories of this one, I am sure I watched it, back in the day.

truly one of my favorite Halloween cartoons. They used to have it on DVD, and now I can't find it...too bad.

I remember quite a bit about this one.

Bill, Please email me at sinktitanic@gmail.com regarding one of your Haunted Closet posts. I wanted to see if it would be cool to reference it in a magazine and, if so, proper crediting. Thanks!

Legion, let me know what post you're talking about in the comments.