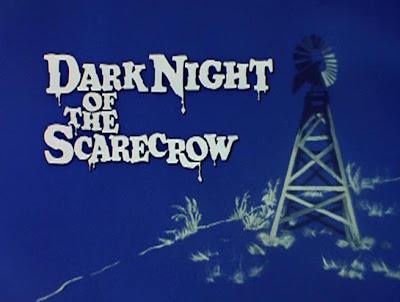 But perhaps most rewarding is the final arrival of the on again, off again, announced, delayed, and announced again, made-for-TV chiller Dark Night of the Scarecrow. 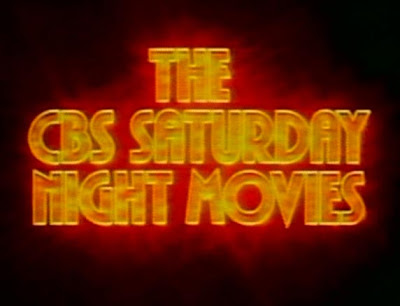 Originally aired in 1981 as a CBS Saturday Night Movie (a teaser ad shows up on the DVD among the extras--a thoughtful addition), Dark Night of the Scarecrow centers around 11-year old Marylee Williams (Tonya Crowe) and her mentally challenged playmate, Bubba (Larry Drake), a 37-year old man with the mind of a child. 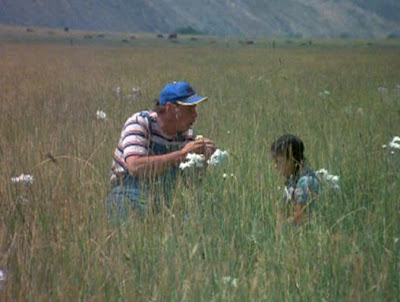 The pair spend their days playing games and picking flowers in the fields of their rural town. But the local postman, Otis P. Hazelrigg (Charles Durning) doesn't trust Bubba, and monitors them from afar with a pair of binoculars (it's later suggested Otis's interest in young Marylee is of the unhealthy variety). 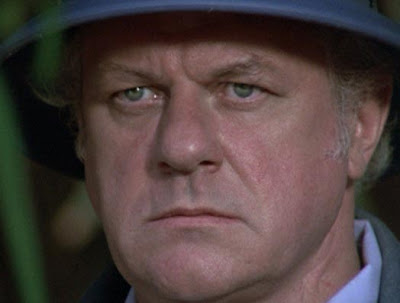 When Marylee and Bubba happen upon a lovely garden in the backyard of a neighbor's house, Marylee can't resist slipping through the fence to get a closer look, despite Bubba's warning that she shouldn't. 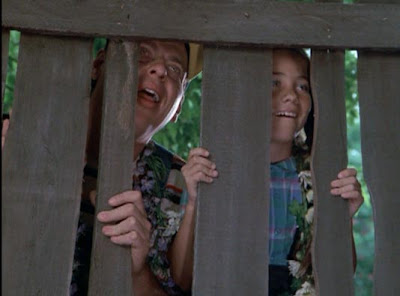 Bubba was right. A guard dog appears and viciously attacks the girl under the watchful eyes of garden gnome statuary. 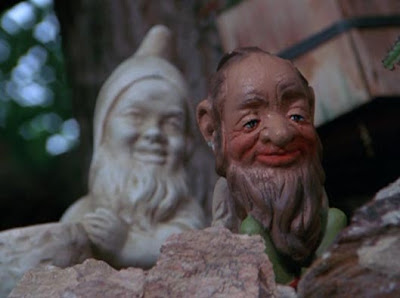 Bubba carries the injured girl to her mother's house, pleading through tears that he didn't do it. But rumors spread quickly in a small town, and soon a makeshift posse led by Otis heads to Bubba's house to extract vigilante justice. 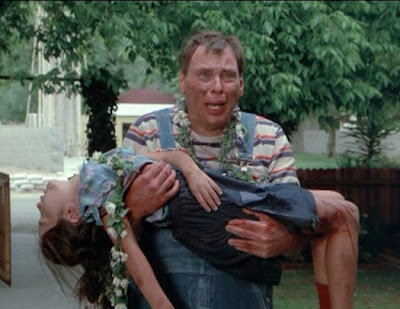 Meanwhile Bubba arrives home to the welcoming arms of his mother (Jocelyn Brando, who played the witch on the Darkroom episode Catnip). She tells him to play "the hiding game", and Bubba hides himself inside the scarecrow standing guard in their field. 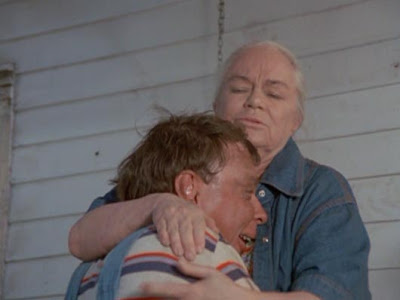 But Otis and his posse (Lane Smith, Claude Earl Jones, and Robert F. Lyons) aren't put off for long, and open fire on the helpless Bubba. 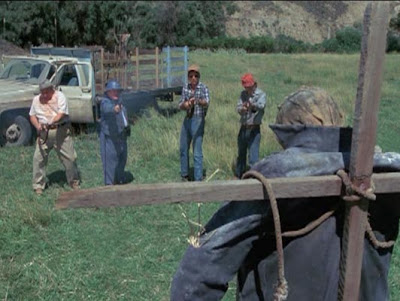 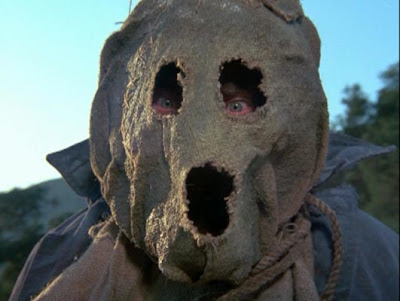 The four stand trial, but the judge let's them off when they claim Bubba attacked them with a pitchfork and their gunfire was in self defense. Life returns to normal for the four, but not for long. A scarecrow mysteriously appears in the field of Harless Hocker (Lane Smith). 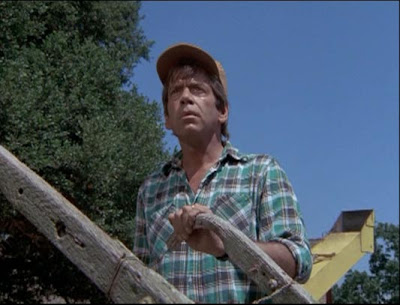 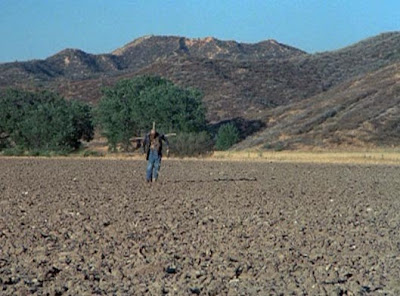 At first he thinks its his partners in crime trying to play some prank. They later decide it must be either the prosecuting attorney, or Bubba's mother, trying to stir up trouble. That night, Harliss hears a disturbance in his barn, and after climbing up to the loft to investigate, ends up falling in a thresher. 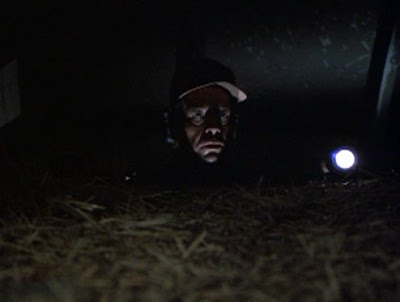 A few days later, another scarecrow appears outside the farm of Philby (Claude Earl Jones). 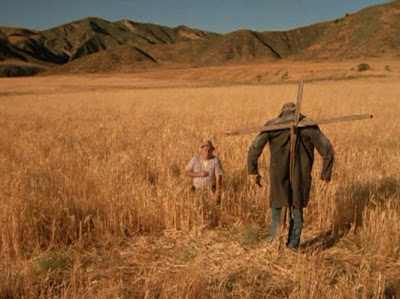 That night, his investigation of noises results in him getting locked in a silo and drowning in a fountain of grain. 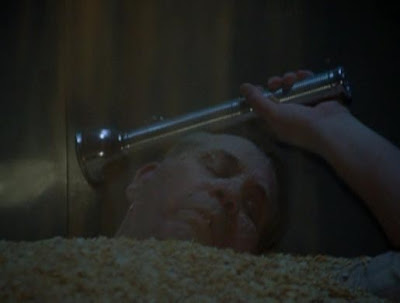 Halloween arrives, and Otis approaches Marylee at a party to find out what she knows. Marylee claims to still be in communication with Bubba, who has told her all about how he really died. 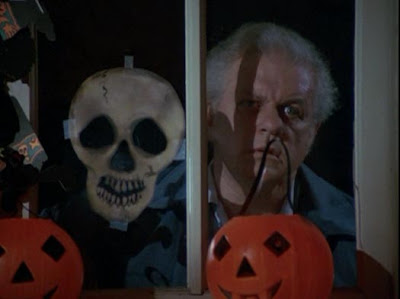 We also get a brief glimpse of a Beistle Company Halloween decoration. 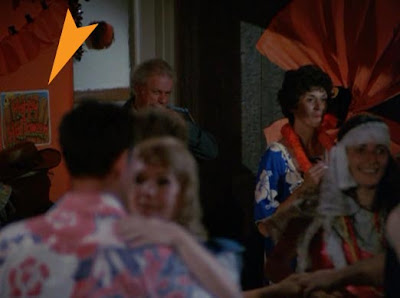 Now wondering if Bubba may still be alive, Otis and the last living member of his posse, Skeeter (Robert F. Lyons) head out to the graveyard to confirm his coffin is occupied. 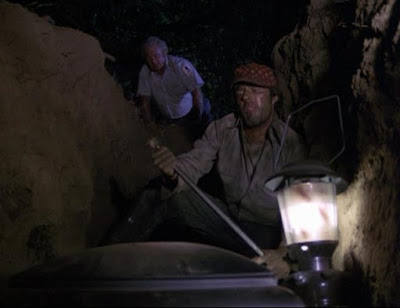 Bubba's corpse is right where it should be, but Otis, suspecting the increasingly irrational Skeeter is going to do something stupid to jeopardize their "not guilty" verdict, nails him with the shovel. (A memorable detail: Skeeter's hat sticks to the shovel blade!) 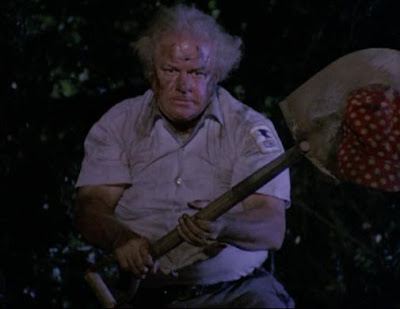 Otis, having spotted Marylee on the road, chases her into a pumpkin patch, only to end up running for his life in front of a ghost-driven tractor. Can you say BEST HALLOWEEN EVER? 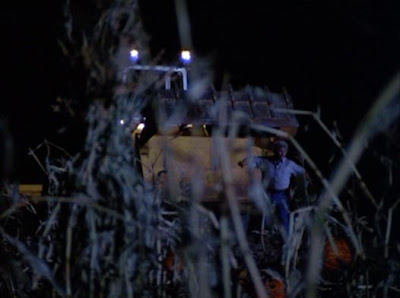 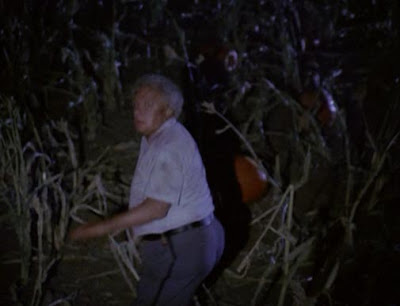 For a nearly 30-year old made-for-TV movie, Dark Night of the Scarecrow looks sharper on DVD than it has any right to, and besides the previously mentioned CBS Saturday Night Movie bumper, you also get a commentary track by writer J.D. Feigelson and director Frank De Felitta (among the interesting tidbits they provide is that they had to obscure the name of the graveyard, "Green Acres", at the request of CBS executives.) 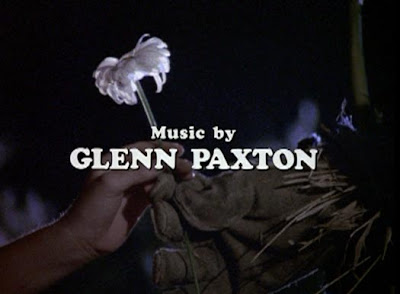 I should also mention that the score by Glenn Paxton, which at times sounds like synthesizers singing playground songs, will send a shiver up your spine. Buy Dark Night of the Scarecrow here.
Posted by Brother Bill at 5:17 PM

...certainly looks a bit better than pumpkinhead...but why compare?

I saw this movie at my grandparent's house when I was 7 and it terrified me! Oh the horror. I recently looked it up and youtube and could not believe how surreal the attack scene is.

Bubba didn't do it.

Totally remember seeing this one too. I remember at the time it scaring the crap out of me. I maybe saw it once or twice more after it first aired, and then semi forgot about it...it always lingered in my head somewhere in the back though. Good movie for the time, great movie for the made for tv set.

This arrived on German DVd this year. The old CBS promos were worth the price of the disk alone!