Magic from the Haunted Mansion in Disneyland (1970) 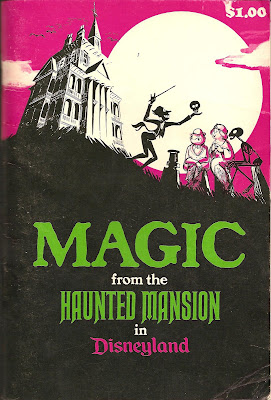 "Magic from the Haunted Mansion in Disneyland" (1970) is a fun little 60-page book presenting basic table-magic and card tricks for kids. The tricks are okay, but the real treat of this book is the cartoonish depictions of the Haunted Mansion and its denizens. 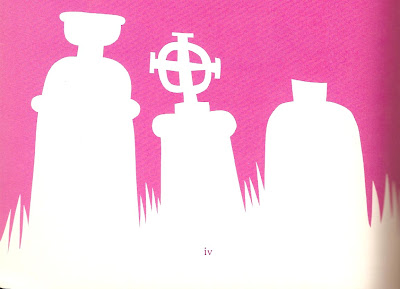 Four royal spectres are made to materialize in this card trick, "Rescue of the Queens". 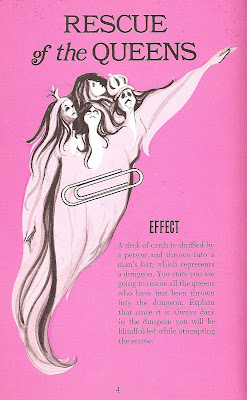 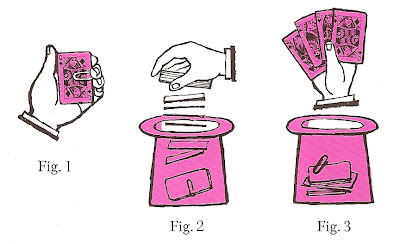 In this rendering of Madame Leota, she looks very similar to Sleeping Beauty's evil sorceress Maleficent (both characters were voiced by Eleanor Audley). 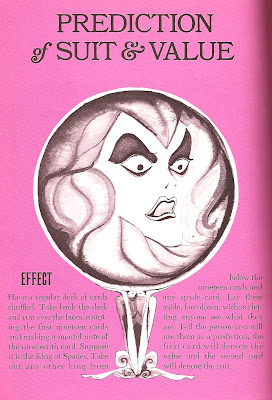 The graveyard's decapitated knight is used to illustrate another card trick, "A Found Head". 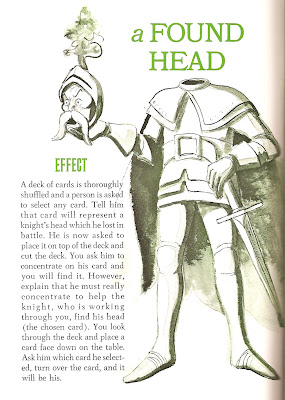 The skeleton, whose arm is seen laying the brick and mortar of its own crypt in the Mansion's graveyard, is demonstrating a coin trick. 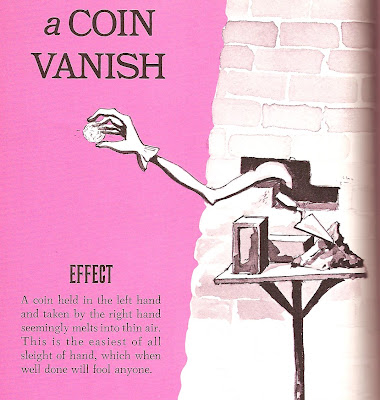 You won't need a coffin to perform "A Coffin Escape"...just a coin and envelope. 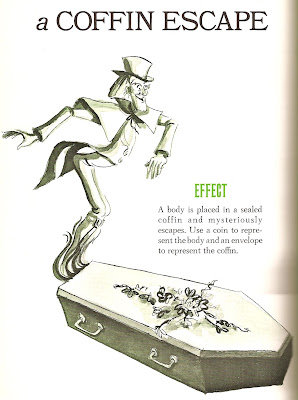 Here's the mysterious hat-box ghost, whose cult popularity with those in-the-know ranks him as the Boba Fett of the Haunted Mansion. 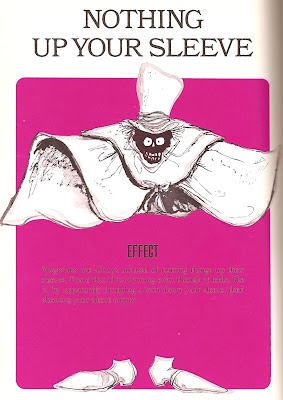 "The Crying Griffin", another coin trick, is illustrated by the leering demonic candelabra from the stretching room. 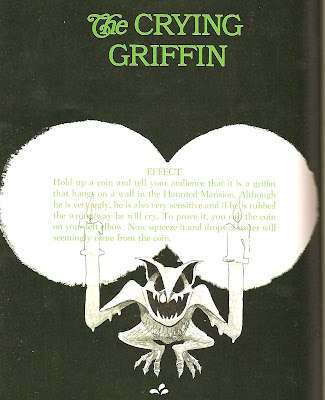 In this next illustration, a Disney executive explains the impending ticket-price hikes at the Disney parks. 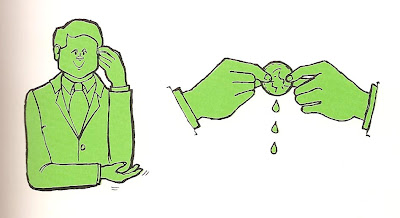 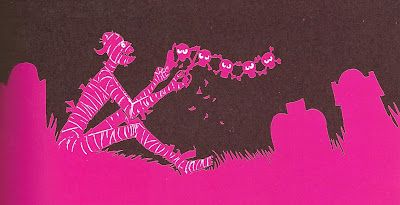 A ballroom ghost, and a business card from "Elias P. Etherial". 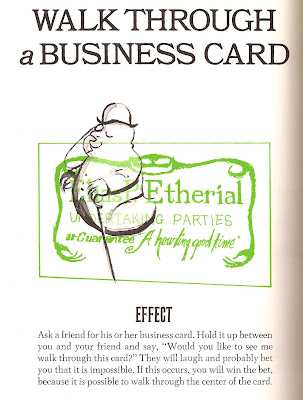 One of the stretching portraits. 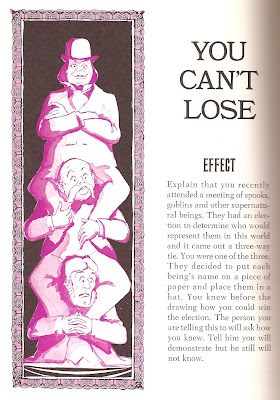 This green ghoul looks like he could be related to the attic ghosts that pop-up out of the bric-a-brac. 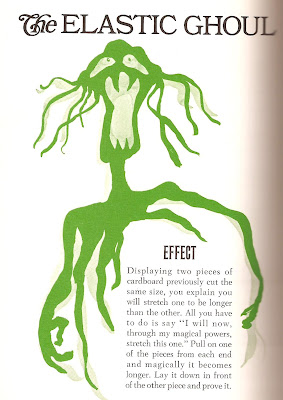 A happy mummy pops out to ask "How old am i?" 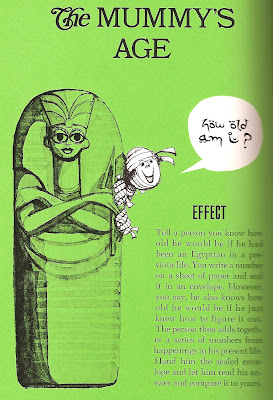 The graveyard's masked executioner looks a little underdressed for Disneyland. 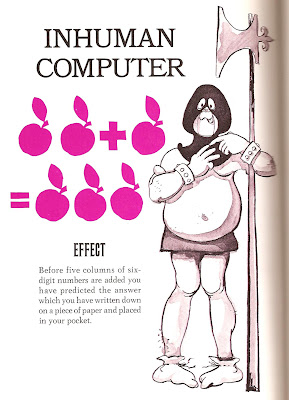 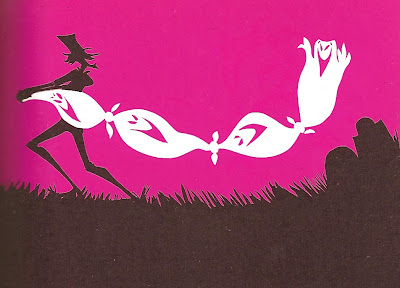 The cadaver dangling from the rafters of the stretching room...she lost her life, but looks like she kept her hat. 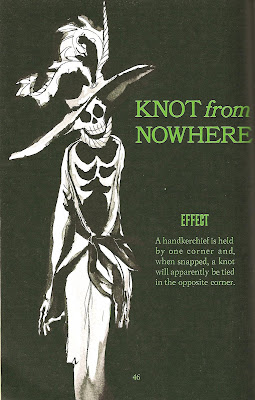 To my knowledge, there isn't a vampire depicted in any version of the Haunted Mansion attraction, but here's one performing a handkerchief trick. 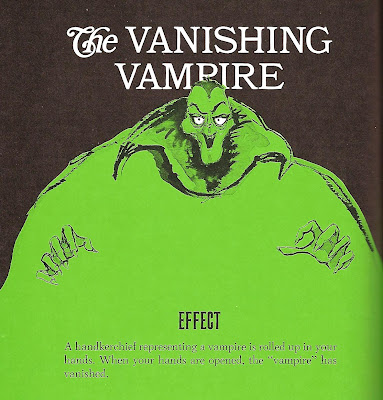 Another stretching portrait, this time for "The Miracle Rope Splice." 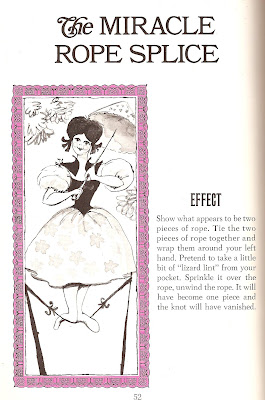 The graveyard opera singers show you how its done in a section on throwing your voice. 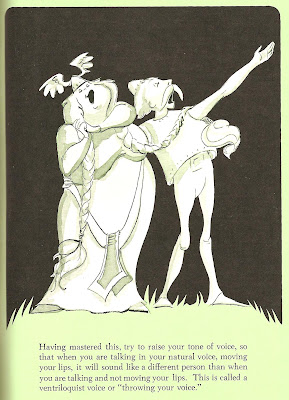 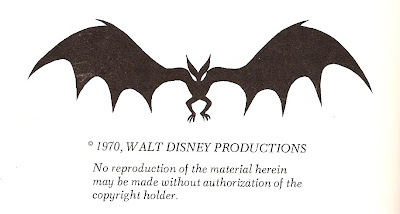 Sometimes one stumbles upon a gem such as the one you have going on.

Fantastic! I've always wanted to see the illustrations in this book and have not been able to lay hands on a copy. Thank you!

I love this book!! My favorite is the 'disney executive'..lmao!!

Really great- thanks for posting this book. I used to have it many moons ago and its a real treat to see these illustrations again....

Actually, a vampire is one of the Sinister 11 portraits at Disney World and Tokyo.

No author is mentioned. it was written by Alwyn Stevenson, a wonderful showman and magician who was featured in the February 1965 issue of M-U-M, the official organ of the Society of American Magicians.