I first became aware of Scott Corbett's 1972 ghost story The Red Room Riddle when the made-for-TV adaptation decided to crash my regularly scheduled Saturday morning viewing ritual. My fandom for children's horror stories adapted for television had been established years earlier in my stumbled-upon viewing of Once Upon A Midnight Scary (1979), the Vincent Price-hosted anthological trio comprised of The Legend of Sleepy Hollow (Washington Irving), The Ghost Belonged To Me (Richard Peck) and The House With a Clock In Its Walls (John Bellairs) (covered previously in a years-old blog post that's not very well written, but hey, at least the screen caps are... adequate.)

For The Red Room Riddle, Price even reprises hosting duties alongside feline puppet regular O. G. Readmore in this ABC Weekend Special presentation which aired just in time for Halloween, 1984. 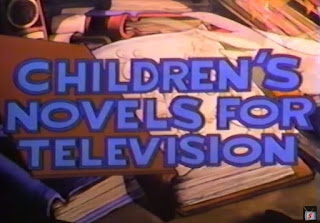 Grade-school kids exploring an abandoned haunted house with nary an adult chaperone to be found? On paper, this should have been exactly my cup of arsenic. But even with my Expectations-Have-Been-Lowered-For-Television mindset, this version was lacking in atmosphere or scares, and kind of just plods along until it mercifully ends, with our lead explorers, Scott Jacoby (Bad Ronald) and Nicholas Gilbert ("3rd bully" in The Never Ending Story) left unscathed and unchanged by their experience.  For me, the most memorable thing about The Red Room Riddle was its alliterative title in dripping-blood font.  (But don't let my singular pooh-poohing steer you away from checking it out for yourself---there are plenty of first-hand kindertraumatic testimonies singing its praises by viewers other than me.) 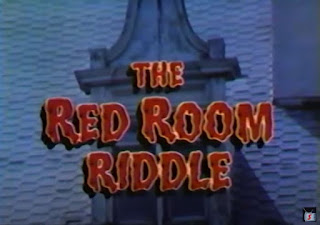 That old Red Room Riddle font gives me the creeps!

I've said it before: most mysteries are solved in the library, and that's exactly where I went to investigate The Case of The Ghost Story Adaptation That Wasn't All That. If The Red Room Riddle's premise sounded good to me on paper, maybe "on paper" was the proper place to actually experience it, was my thinking. 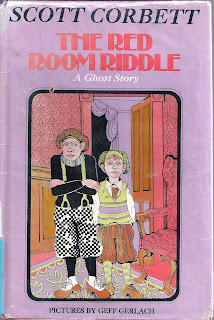 Now let's get one thing straight---there is no actual riddle in The Red Room Riddle. Yes, there are mysterious goings-on that beg explanation, but anyone hoping for a what gets wetter the more it dries type plot-revolving puzzler for the characters to solve will find no such satisfaction.

Did I mention I love ex-library copies? This book filed under Mystery, because of all those mysterious goings-on that beg explanation, no doubt.

Framed as a first-person childhood reminiscence, The Red Room Riddle recounts an adventure by our narrator Bruce Cowell and new-to-the-neighborhood friend Bill Slocum on a drizzly Halloween.

Bruce's love of Halloween is expressed repeatedly, described here as "the most exciting night of the year." Apparently trick-or-treating was not yet a common practice when and where this story is set, so Halloween was instead a night of rule-breaking and mischief-making, "... when we were allowed to run loose in the dark. We looked forward to it for weeks."

Regional lore tells of a haunted house in the nearby affluent neighborhood of Mt. Alban, at which a baby's body was supposedly found years ago, chopped up and buried in the garden (unsurprisingly, the TV version leaves this gruesome detail out entirely.)

A timely conversation about belief in ghosts inspires the pair to seek out the house for "research", but really Bruce and Bill are just looking to add a little spice of the non-pumpkin kind to their Halloween gallivanting.  Guided by Bruce's fuzzy memory of having once passed by the place years earlier, the pair venture forth into the labyrinth of lanes, streets and drives that wind their way up Mt. Alban, eventually stumbling upon the house, three stories of dilapidation and jungle undergrowth.

Unlike the TV version, where the kids are left unscathed by their forbidden explorations, Bill gets scathed immediately, brushing against a thorn as they struggle their way through the unkempt grounds, leaving a bloody scar on his cheek.

While still navigating the yard, a third member unexpectedly joins their party: an aloof kid named Jamie Bly, trailed by his menacing bulldog, Major. Jamie claims familiarity with the house and offers to lead them on a tour, but there's something off-putting about his too-cool demeanor that immediately puts Bruce and Bill on edge. After making their way indoors and up a rickety staircase, they are chased out by yet another new arrival, a cantankerous old groundskeeper (who, considering the state of the grounds, should probably find another profession). While fleeing the property, Bruce thinks he sees Jamie's dog digging at a "small, age-yellowed bone...leaning sideways in the hole with the tilt of a disturbed tombstone." Is the legend of the chopped up baby true after all?

Sensing their fear while exploring the house, Jamie taunts them with an offer to experience actual ghosts in person later that evening at his own home. Despite their skepticism, Bruce and Bill appoint to meet him that evening at an intersection a few blocks away.

In the interim, they debate allowing their Halloween evening itinerary to be dictated by this infuriating stranger who obviously won't be able to produce real live dead ghosts--but may just have some other prank up his sleeve.  Ultimately the pair decide to call Jamie's bluff (but secretly, they each hope he won't show up.) 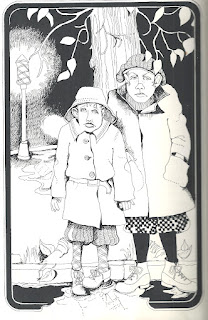 Bruce and Bill waiting for that little twerp Jamie. Illustrations are by Geff Gerlach, working in the I-Could-Draw-That style.

When Jamie does indeed appear at the appointed time and place, Bruce and Bill pivot from dread to bravado and dare him to deliver on his earlier promise. After leading them on a disorienting pretzel path through the neighborhood, the trio finally arrive at Jamie's house, which Bruce and Bill find as uninviting as the abandoned Mt. Alban house.

Mirroring their earlier experience, Bill's cheek is again scratched as they approach the house, this time accompanied by a mysterious whooshing sound and a cold burst of air.

And this is the point where we dive head first into the unique weirdness of Corbett's story that is sorely missing from the TV adaptation.

Once inside, Jamie's house proves legitimately spooky. Lit only by intermittent gas lamps, it's a confusing, shadowy labyrinth of lonely corridors and dark corners.  Jamie's parents are supposedly out for the evening, leaving a pair or servants as the only adults in the house. A mute maid emerges unexpectedly from the shadows just long enough to blow out the nearest lamp and then disappear again into darkness.

A huge, horrific tapestry adorns one wall, depicting the Biblical atrocity of King Herod putting children to the sword. This combined with the earlier sight of what might very well have been a murdered child's skeleton casts a foreboding seriousness over what would otherwise seem a harmless Halloween jaunt. This is another colorful detail omitted from the TV version, which ditches the whole infanticide theme entirely. 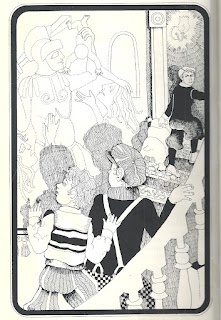 Again evoking their earlier adventure, they find themselves following Jamie up a staircase, this time to visit (drum-roll) "The Red Room". What's red and red and red all over? This unsettling upstairs chamber in which every wall, fixture and piece of furniture is covered in various shades of crimson that, impossibly, appears to still be dripping wet, prompting Bill to not so helpfully volunteer that old wooden warships used to paint their decks red to disguise blood spilt from battle.  "That's right." Jamie agrees with a knowing smirk.

The other shoe--which Bruce and Bill had been anticipating all evening--finally drops when Jamie springs his prank, locking them in the Red Room and challenging them through the red door to find a hidden red staircase somewhere near the red fireplace.  As they fumble around for a secret panel, crashing metallic footsteps can be heard from outside the room with increasing volume, and Jamie ominously warns they'd better hurry or "you'll see more than you bargained for." 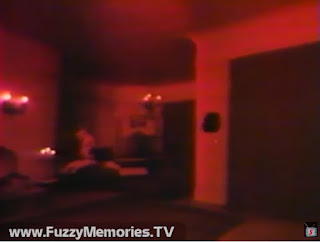 Admittedly the depiction of the room itself in the ABC Weekend Special is kind-a neat looking, even if it eschews the weirdness of the book for more generic haunted house tropes like floating candles

A tense and prolonged climax finds our heroes fleeing from a sword-wielding phantom Roman soldier down a claustrophobic spiral staircase, and a mysterious final flourish has us questioning whether any human being (or dog) Bruce and Bill have encountered since first stepping foot in the earlier Mt. Alban house is real, imagined, or something in between. It's even possible the Mt. Alban house and Jamie's are one and the same.

In a sad coda, Bruce describes trying to relay the incident to his parents years later, only for it to be dismissed as the result of a child's overactive imagination.

But Bill's scar, we are told, never healed.

The Red Room Riddle is out of print as of this writing.

Had the same experience. As a kid, I saw the show, the library ILL'd the book for me, and it was bizarre and just left me frustrated.

Did you ever see the ABC weekend special of The Haunted Mansion Mystery with a very young Christian Slater? It was based on The Treasure Trap by Virginia Masterman-Smith, and made for a better read.