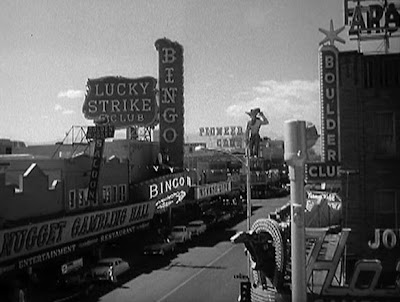 While lounging in a casino coffee shop one morning, a down-on-his luck gambler (Steve McQueen) politely lights the cigarette of an older stranger, Carlos (Peter Lorre). Admiring the gambler's lighter, Carlos proposes a bizarre but intriguing bet. If McQueen can light his lighter ten times in succession without it misfiring once, Carlos will hand him the keys to his brand new Cadillac parked out front. 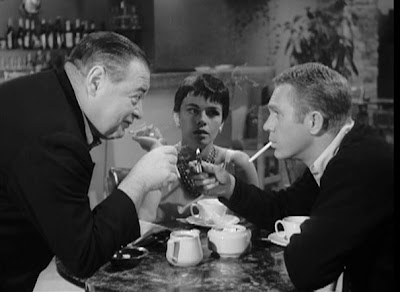 If he loses, McQueen will give up something he can afford to lose... the pinky finger of his left hand. At first McQueen dismisses the proposition as the ramblings of a crazy old man. But after further goading by Carlos, and an explanation of exactly how he plans to claim the finger should McQueen lose the bet (with a meat cleaver!), McQueen agrees. 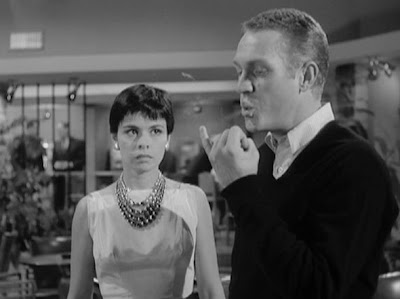 McQueen and two bystanders follow Carlos to his luxurious hotel room, where his left hand is tied down with some twine between two nails, Carlos readies the cleaver, and the bet begins. 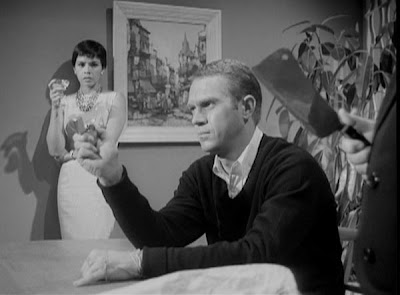 A tense count of seven successful lighter strikes later, a woman suddenly bursts into the room and wrestles the cleaver from Carlos' hand. It is his wife, who scolds Carlos for betting again while she was away. 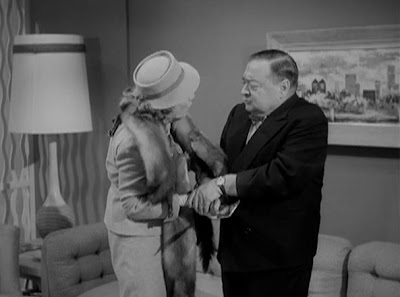 Carlos has nothing to bet with, she explains. The Cadillac belongs to her, along with everything else he once owned. You see, it took her awhile, but she won all of it. As she reaches for the car keys, we notice she has only two fingers on her left hand. 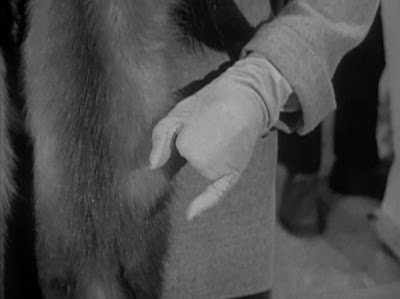 From the fifth season of Alfred Hitchcock Presents, "Man From the South" is an adaptation of a 1948 short story by Roald Dahl (which can be read in various Dahl compendiums, including The Umbrella Man and Other Stories.) 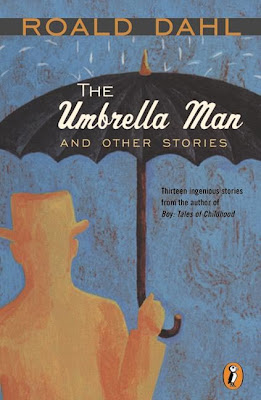 The story has such an instantly captivating hook, suspenseful final act and satisfying surprise payoff, it remains one of the more talked about Alfred Hitchcock Presents episodes, and has found its way to the screen more than once.

The premier episode of Tales of the Unexpected (1979), an anthology show based exclusively on the short works of Dahl and hosted by the author himself, presented a version more faithful to Dahl's original text, which sets the story at a Jamaican beach resort instead of Sin City. 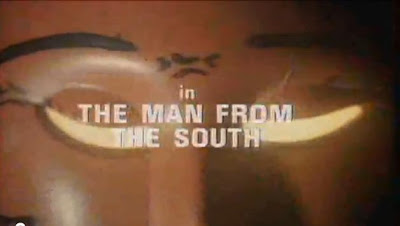 But probably the most intense version is the 1985 remake done for The (New) Alfred Hitchcock Presents, which stars John Huston as Carlos and Kim Novak as his wife, and manages to dial up the tension even further by having Novak's surprise entrance cause a draft that blows out the lighter flame, bringing down Carlos' eager cleaver for a near miss before she stops the bet. 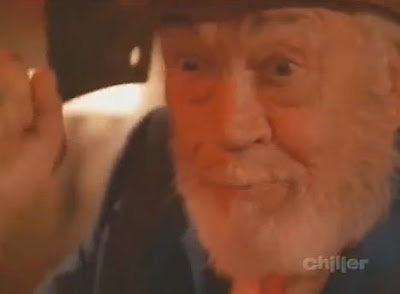 Director Quentin Tarantino even paid homage to the story for his segment of the 1995 anthology film "Four Rooms", in which a group of drunken New Years Eve celebrants, among them Tarantino and Bruce Willis, are discussing the Alfred Hitchcock Presents episode and decide to carry out the bet themselves, enlisting the aid of the bellboy, played by Tim Roth. As derivative as this premise is, Tarantino manages to make it his own with additional character nuances and a surprise ending. 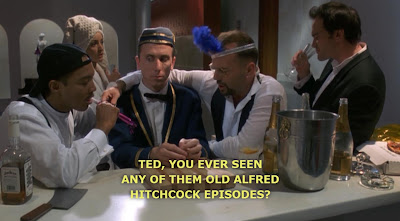 I was familiar with director Alfred Hitchcock at a young age (see my previous post on his spooky story collection for children, Ghostly Gallery). As it happens, my introduction to the original Alfred Hitchcock Presents show, which I first caught in reruns on PBS sometime in the early 80s, was with the fifth season.

And what a great season to get started with, for it contains not only "Man From the South", but several other notable and memorable episodes. My favorite is the Robert Bloch penned "The Cuckoo Clock", in which a woman staying alone in a remote cabin gets an unexpected visit from an unstable stranger who may or may not be an escaped, mentally disturbed murderer. 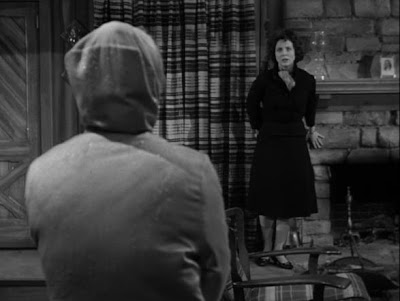 A cuckoo clock in the cabin becomes the focus of attention for several characters, serving as a motif of madness. 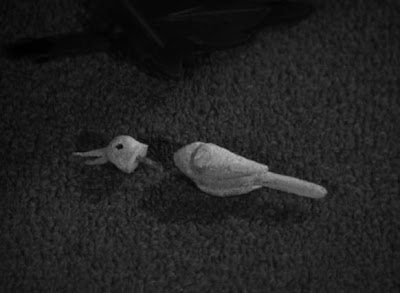 "An Occurrence at Owl Creek Bridge" is a competent adaptation of the dark Ambrose Bierce Civil-War chiller we all remember from English class. 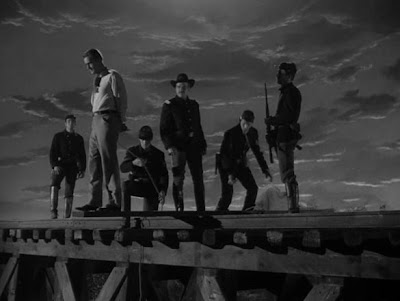 In "Special Delivery", based on a short story by Ray Bradbury, a boy starts a mushroom farm in his basement after ordering seeds through a comic book ad. But is there more to these mushrooms than meets the eye? A scene where Dad approaches his increasingly distant son in the dark basement and is ordered by his son to eat a mushroom sandwich had me squirming in my seat. 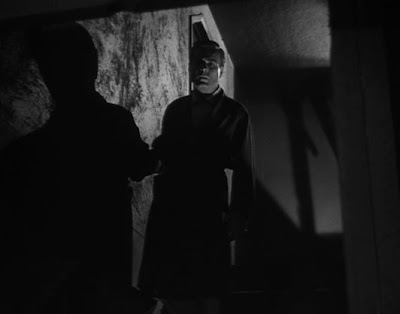 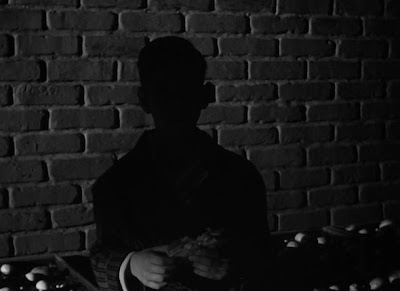 Finally, there is the exclusive, members-only restaurant depicted in "Specialty of the House", which serves a seasonal dish that seems to coincide with the loss of one of its members. 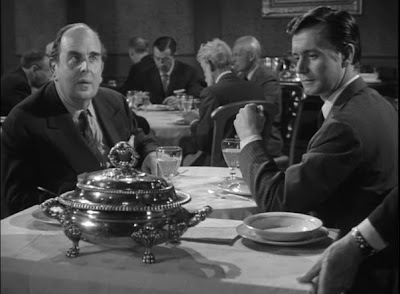 Alfred Hitchcock Presents: The Complete Fifth Season, featuring all of the episodes described above, is available now on DVD. 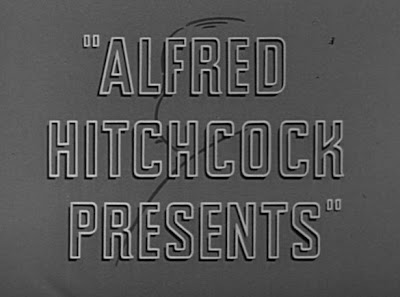 Of the episodes you mentioned Specialty of the House was the only one I've seen so far. It really is an excellent episode. To me, the best Hitchcock eps are as good as the Twilight Zone.

Actually, "An Occurrence at Owl Creek Bridge" was shown on THE TWILIGHT ZONE. Still, an excellent piece.

THE ALFRED HITCHCOCK HOUR was even scarier, and not merely because it was longer.

Alan D Hopewell-- you're absolutely right, Twilight Zone presented an adaptation of that story as well. Interestingly though, they didn't actually film their own version of the story specifically for the show--they just broadcast the 1962 French short film version, directed by Robert Enrico