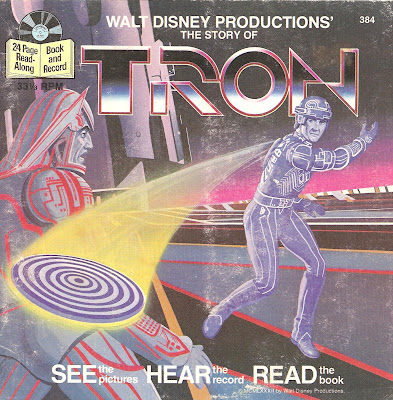 With the long out-of-print Disney film TRON finally getting re-released on DVD and Blu-Ray this week (as well as its worthy sequel), I thought I'd post a summary of the original story in 24-pages of artist's renderings, courtesy of the 1982 Read-Along Adventure Book-and-Record, The Story of TRON, and share a few memories of what TRON made me do when I first saw it in theaters as a grade-schooler... 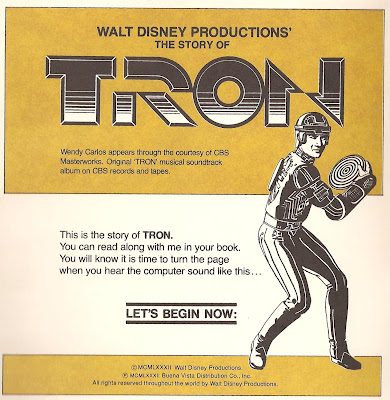 USING FRISBEES AS WEAPONS
Me and every kid I knew owned a frisbee or two, but by the 1980s, they were all lost under the bed, in the closet, or somewhere in the garage. But after seeing TRON, this forgotten old relic from the 70s got dusted off and put to good use as a projectile-missile in order to replicate the disc-war segment of the film. 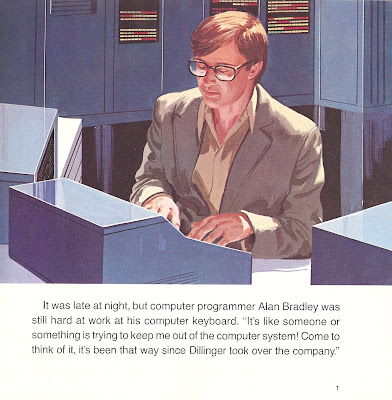 Originally I tried building my own custom Tron-like disc out of cardboard, only to abandon it for the much superior (and more painful) standard frisbee. Think of dodge-ball, but with hard plastic discs, and no adult-supervision getting in the way of the fun, and you get the idea. Many bruised fingers were incurred from trying to also use the frisbee as a shield to deflect incoming discs. 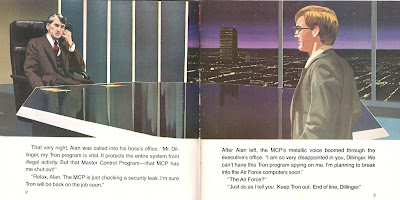 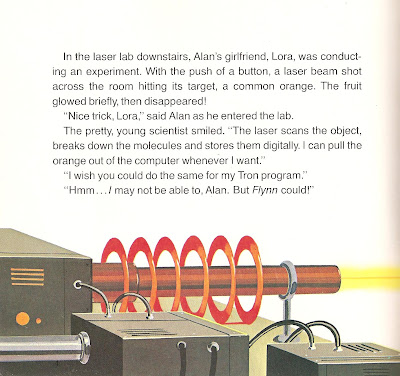 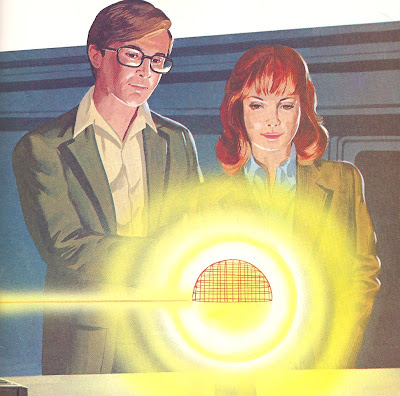 RAMMING INTO EACH OTHER WITH OUR BIKES
After a bit of brainstorming trying to figure out how to modify our standard bicycles to leave a deadly light-wall behind them (one failed attempt involved attaching a piece of chalk to a stick that extended out the back wheel and scraped along the ground. Didn't work.) my circle of friends and I finally realized that all the thrills of the light-cycle game could be captured by just ramming our bikes into each other. The rider of the bike still standing was declared winner... but in a way, we were all winners. 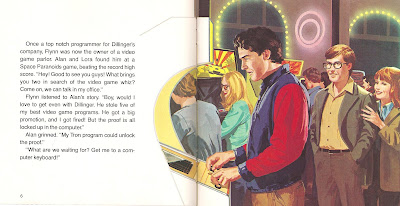 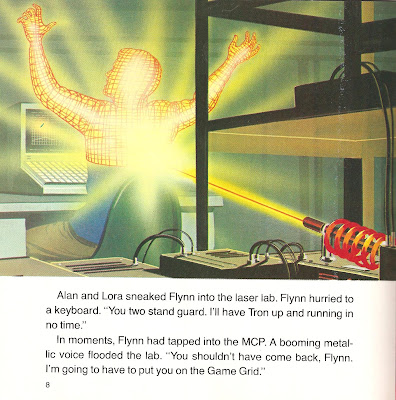 ADAPTING LIGHT CYCLES AS A BOARD GAME
This may sound strange, but one way I found of expressing my loyalty to a particular video game when I was a kid was to try to make my own board-game adaptation of it. The fact that home-console adaptations of arcade hits were still pretty crude and rarely captured the action of its arcade inspiration no doubt fueled my desire to take matters into my own hands. 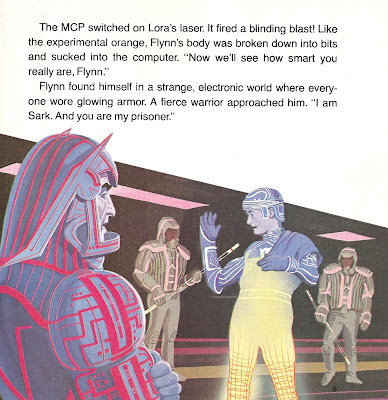 A few years later when I finally got my first PC, I would try making my own versions of arcade hits coded in BASIC, though they were usually about as crappy and un-fun as my earlier board game attempts. 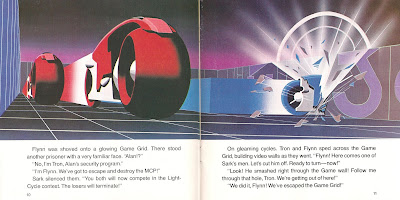 For the light-cycles board game, I cut out dozens of little colored rectangle pieces to use as jet-wall sections. Of course they never ended up staying in place, and the draft from a door opening, or a good sneeze, would derez the entire match. 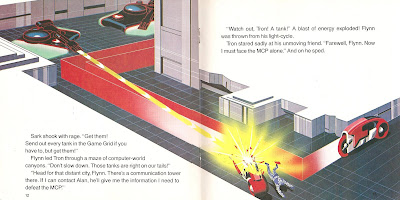 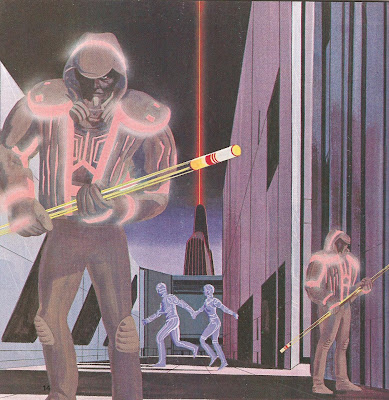 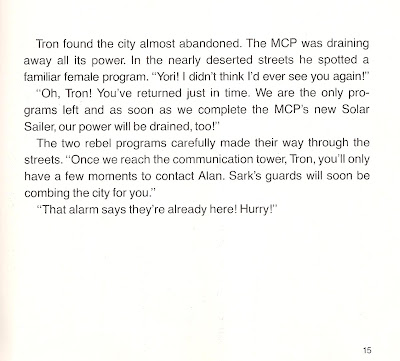 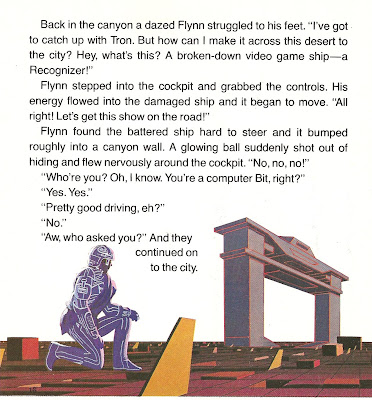 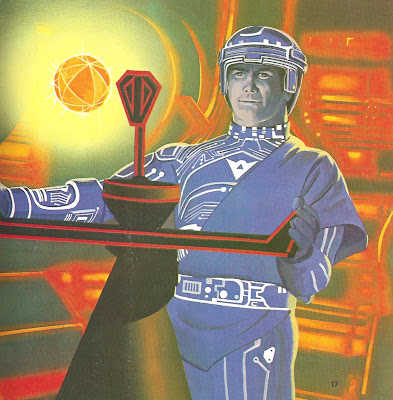 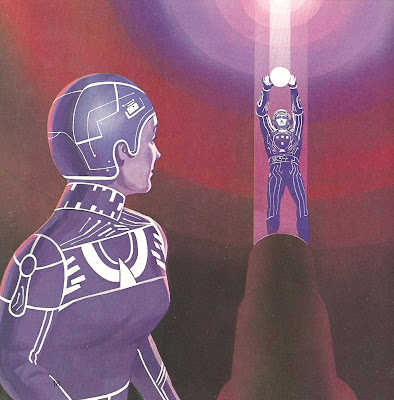 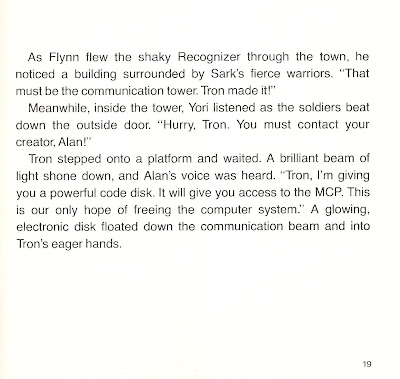 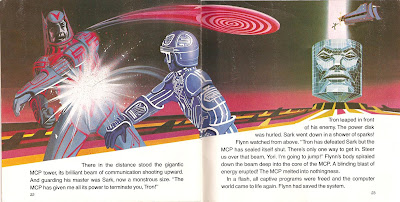 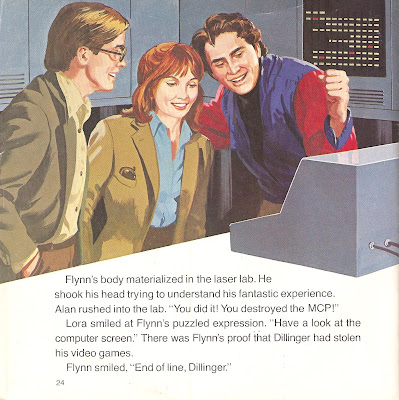 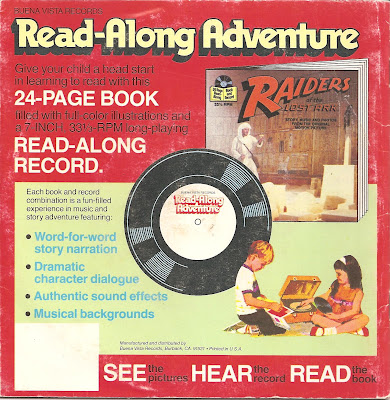 Nice work. I came across your blog while “blog surfing” using the Next Blog button on the blue Nav Bar located at the top of my blogger.com site. I frequently just travel around looking for other blogs which exist on the Internet, and the various, creative ways in which people express themselves. Thanks for sharing.