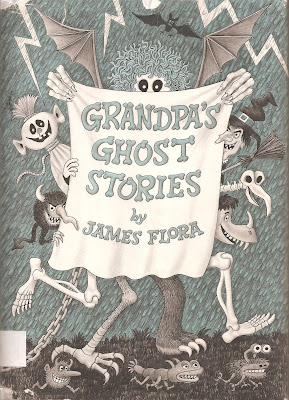 In Grandpa's Ghost Stories (1978), a boy, frightened by the sounds of a raging thunderstorm, seeks comfort from his grandfather. Grandpa proceeds to tell three stories, each as wild and whimsical as the 1950s jazz album cover art that artist and author James Flora (a.k.a. Jim Flora) may be better known for.

But Grandpa's stories are far from soothing, since his stories are scarier than any thunderstorm, with imagery and situations that may challenge a young reader's comfort level. 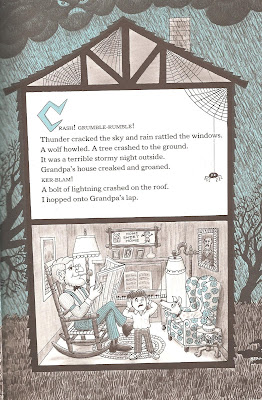 In the first story, The Bag of Old Bones, a boy (supposedly Grandpa, as a child) happens upon a dusty old leather bag in an otherwise empty shack. A voice from within beckons the boy to open the sack, which contains a disassembled skeleton. 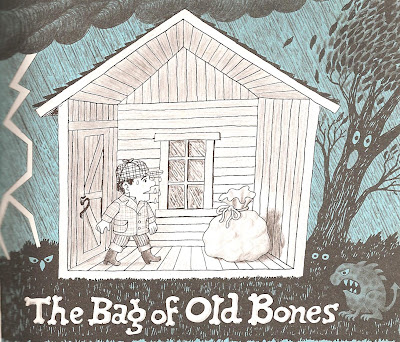 After methodically piecing together the body, the skeleton comes to life and prances around the shack, declaring:

"As soon as I find my teeth we'll have a bit to eat. It's been two hundred years since I've had a morsel in my mouth."

After finding and restoring his loose teeth from the sack, the skeleton reveals his intended meal: 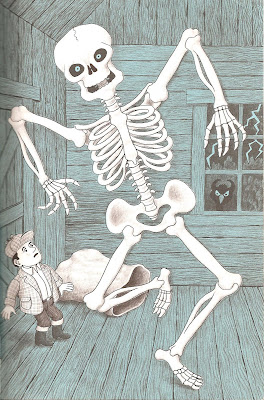 The boy narrowly escapes the skeleton and flees into a tiny nearby cave, where the second story, The Cave of the Warty Witch, begins.

The boy finds himself in a dark cave, surrounded by pairs of fiery yellow eyes. 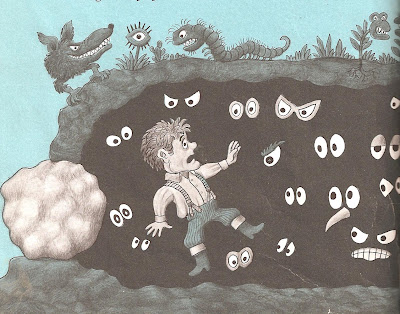 When the cave is finally lit, the boy discovers the eyes belong to "huge, sticky, furry spiders with big, squishy mouths full of teeth" and a "mean-looking, fearsome witch." But these spiders aren't interested in eating the boy, instead hissing ominously "Be our brother, be our brother." They want the witch to turn him into a spider and join the family. 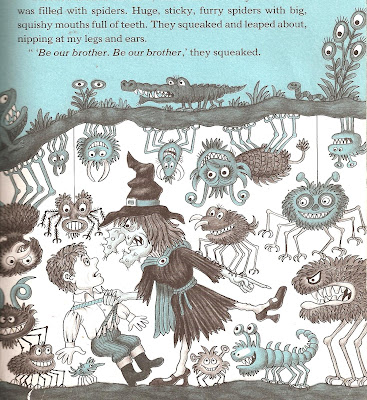 The witch casts a spell, transforming him into a spider.

"The old witch led me to a mirror. I hardly dared to look. When I did, I saw a fearful, hairy spider. It was me. I looked exactly like my new brothers and sisters."

After the witch has fallen asleep in a spider-web hammock she forced him to spin for her, the boy is able to reverse the spell and escape the cave, only to be snatched up by a huge, flying severed hand. 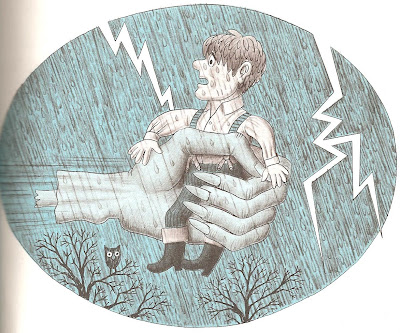 The flying hand whisks the boy to the site of the final story, The House of the Ghastly Ghost.

"What a house. It was built of mud, blood, old bones and bat wings. Here and there you could see a shin bone or a withered claw sticking out of the walls. The roof was made of old rat fur and dead hair. Perched on top were the bones of a long-dead alligator." 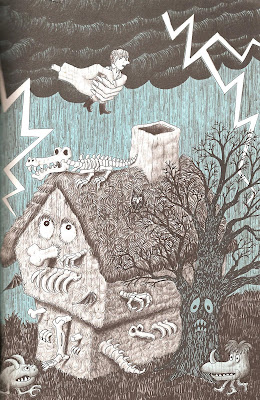 The disembodied hand turns out to belong to the Ghastly Ghost, a "monstrous white ghost" whose "eyes and mouth were just gaping, black holes in her shroud." 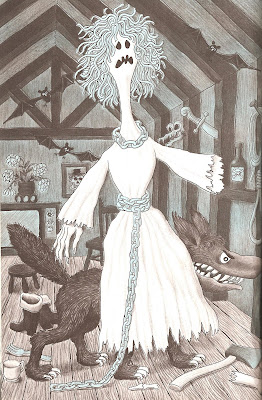 The ghost wants to adopt the boy as her own child.

"You are a darling, boy. You shall be my very own sweet baby." She moaned and kissed me. UGH! Her breath smelled like the wind that blows from a cave full of bats. She hugged me close. WHOOF! Her shroud smelled even worse, like a toad's underwear. 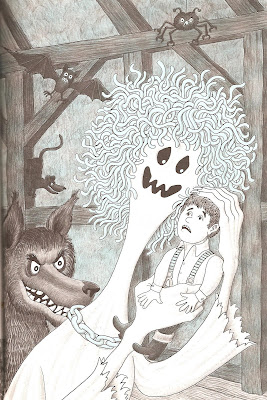 The ghost cuddles up with her new child for some quality time in front of the "ghost TV". The programs include The Open Grave Show, in which a mob of moldy old ghouls chop at each other with axes until one is declared winner... 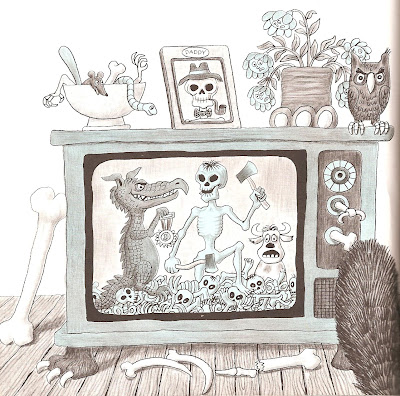 ...Feeding Phantom Faces, a cooking show hosted by a fat-bellied demon who makes soup out of a dead elephant... 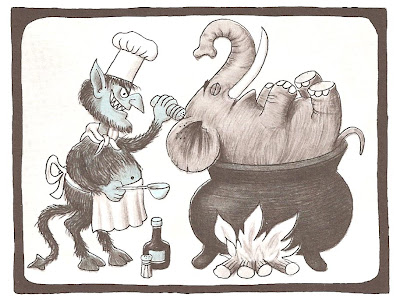 ...and where an old blue witch demonstrates how to "fry baby toes and eyeballs and bake a knuckle-bone pie." 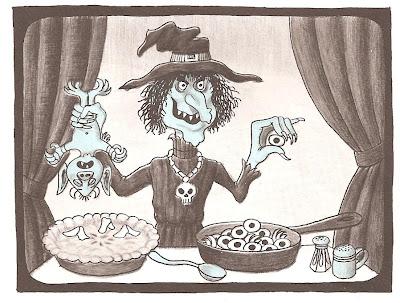 All the while, a "screaming banshee orchestra" provides music that sounds like "truck brakes." 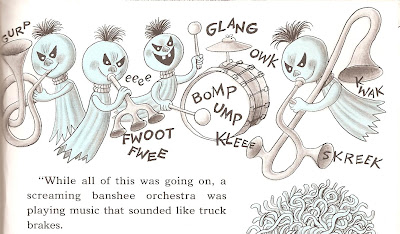 The entertainment is interrupted briefly by a commercial for Goblin Grease (used to lube up creaky goblin knees)... 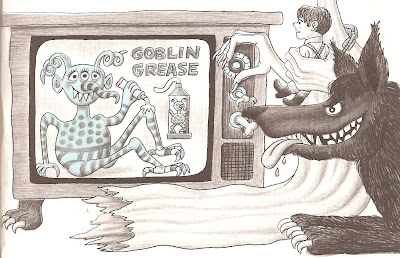 ...and finally The Hairy Snuffler Comedy Hour, in which "big hairy blobs with lots of teeth and claws and runny noses" eat up an entire second grade class. 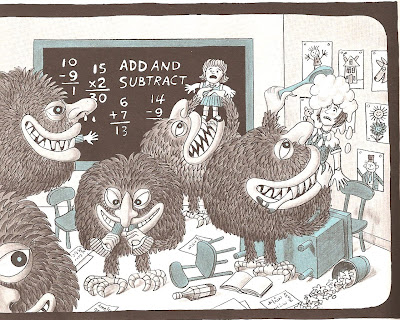 The ghastly ghost is so amused by the program she accidentally drops the boy, right into the jaws of her greedy pet werewolf. 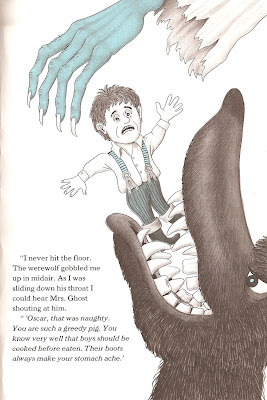 "I was knee-deep in possum tails, bug fur, lizard claws and rat teeth. And the smell--WHOOO-EE!" 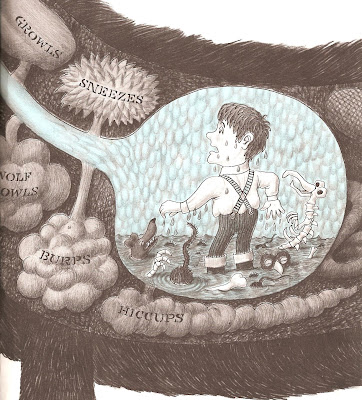 Grandpa's Ghost Stories is long out of print and fetching some high prices on the used marketplace... 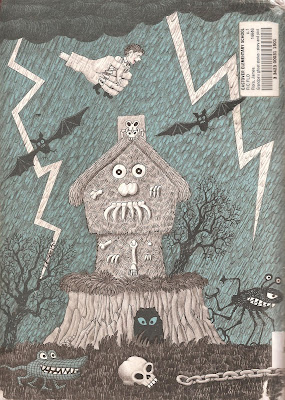 Thanks for showing the insides, I always wondered what it looked like!

This looks fantastic! Is this the whole book, or just a couple pages?

Zach: The book is about 30 pages total... I only skipped maybe 4 or 5 illustrations for this post.

I still have this book! I read it to my son not too long ago. It's not in the best of shape anymore.

There's some very memorable illustrations that have haunted my childhood.

Really fantastic post, and great scans...thank you for sharing this! I love the style of monster drawings and such, great quirky details and "out there" stuff. Awesome relic to have, indeed.

I've been searching for this book for over twenty years. It is the holy grail from my childhood. My copy was left behind on a family vacation when I was five. My parents are in their seventies now but they both still remember the tantrum I threw when I discovered it missing.
Searching for it online was nearly hopeless because I couldn't recall the title or the author. However, the illustrations were burned into my kid brain and led to a life long obsession with monsters and horror. I am so happy to have found it!
Thanks so much!

@ ElderMarsh- I'm with you! I have been trying to find this book forever and couldn't remember the title. I just knew it had something to do with a wolf swallowing a child. I'm so excited to purchase this book online for my children!!!

WOW. This book was available in my school library when I was in middle school. I'm 27 now and was trying to do a post on my site about it and couldn't for the life of it remember. In desperation I googled something like 'scary hardbound blue children's book' and this came up. I was AMAZED to have all those memories rush back to me and see the artwork again. Thank you for making my day :D

Sadly this is not the book I was looking for but perhaps you remember it as well. A boy was told a story by his grandpa in which he met a monster in a house and when he came out his hair was white. I remember the monster had lots of striped arms and it was probaly in the 70's or 80's when it was published. It had really cool scratchy type illustrations.

Oh my gosh, this book is such a page from my past! It was read to us each Halloween by my elementary school librarian. We would all fight to check the book out the rest of the school year. I wish it weren't out of print! Seeing those pages, even 25-30 years later, they are as fresh (and scary!) to me as they were when I was 5, 6, 7, 8 and 9 years old. Thanks for posting!

Ditto with all of the "holy grail of my childhood" comments. I only recently was able to find the title and this post because I saw a locally produced dramatization of the book at a small video/dvd store (Plan 9) in Bloomington, IN. Here's a link to a clip(just seeing it myself) http://www.youtube.com/watch?v=rnJZk7jbAAs

I can't express how disturbed by this book I was! Wow...

Sarah McClure, the book you describe might be "That Terrible Halloween Night" by James Stevenson, or another in his series of books.

This book has been floating around in the dark corners of my memory since childhood, never could recall the title. every few years, i'd google keywords hoping to find it: grandpa... attic... monsters. thanks for posting! god those images FREAKED ME OUT. i always had this vague feeling as a kid that i should not have been reading it. so eerie. cannot imagine giving this book to a kid!, seems like the kind of book that is meant to just be stumbled upon ...

I'm so glad I found this page! I'm 29 now and have never forgotten this book being read to me when I was around 6. I've searched for this over the years and finally found it when I searched for "bag of bones in the corner coming to life" thank you!!

I've been looking for this book forever as well. Had no clue of the title or author. Every so often would Google "flying ghost hand children's book" or some variant. Finally! Thank you!!!

Feral House has reissued Grandpa's Ghost Stories in hardcover for around $20! I preordered a copy months ago on Amazon and it came at the beginning of October. I think it's physically a little smaller than the original, but maybe I'm just bigger now. Anyway! Hope this helps people, I have been trying to get my own copy of this for years and I'm really pleased.

Me too! I just found/bought a new copy on Barnes and Noble for $17. Last year I could only find used for $70

I can confirm Andrews post. I just found/bought a new hard copy for $17 on Barnes and Noble!

Last year I could only find used for $70

Was there another book similar to this and illustrated in a similar manner where a boy left home to find his father in the woods and came upon a witches house and had to try and run away. She would speak in rhymes and riddles.

I am so glad I found this book because this is another one that the images were etched in my childhood brain from 1991 but I couldnt for the life of me recall the author or the title.

But i am pretty sure my favorite book was a different one drawn in the same style.