How I Missed "The Hobbit": A Cautionary Tale for Children

It was the summer before starting fourth grade that I first read J.R.R. Tolkien's The Hobbit. At 255 pages, it was the biggest book I'd read by that time. This was also the summer that a strange new game was starting to get attention in my circle of friends, having trickled down from older siblings and some of the bigger kids at school: Dungeons & Dragons. So even though the book was, by this time, over 40 years old, it still seemed very much new and relevant to what was going on in my fantasy-rich world. 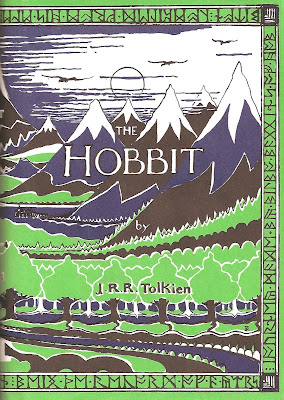 While I loved the book, I was probably just as captivated by the cool maps on the inside covers as the story itself. I couldn't count how many times I copied those maps by hand, or made Xerox copies of them for use as props or gaming material. 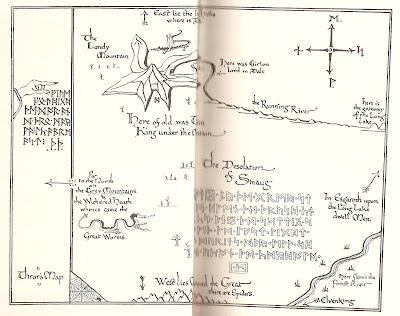 I also memorized the Dwarvish rune lettering that is used on the maps and sleeve art, learning them well enough to write camouflaged cheat sheets for school spelling tests (a foolproof technique that I exploited for years.)

In addition to trying to invent my own games built around the maps and elements of the book, I also had this 1978 Milton Bradley board game, The Hobbit Game (which, if you look closely, is actually inspired by Ralph Bakshi's Lord of the Rings film.) With its many 3-D scenery pieces, the gameboard practically doubles as a diorama. 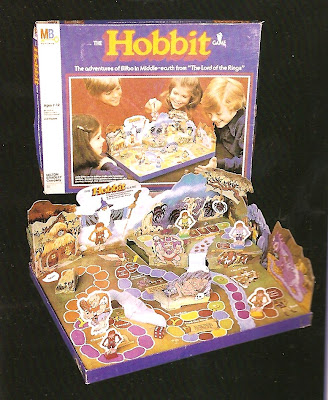 But my first encounter with the The Hobbit was actually a good year or so earlier, via the 1977 Rankin Bass animated adaptation, when it aired on TV in prime-time, in two parts, spread across two nights. 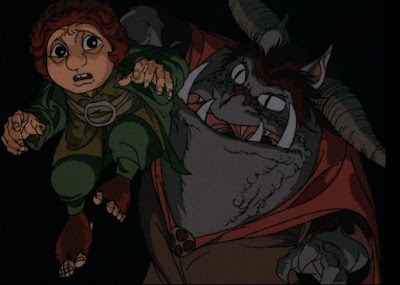 Part One ended on a cliffhanger of sorts, right in the middle of Bilbo's scary encounter with the giant spiders. There was a lot of excited discussion about the film at school the next day, and a I couldn't wait to see the second part that evening. 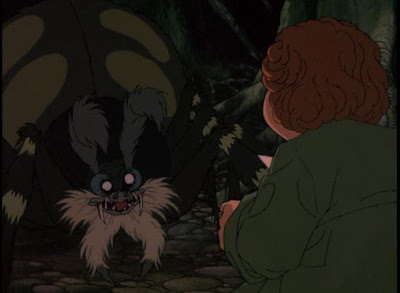 But for reasons both tragic and comical, I didn't end up getting to see the conclusion that second night.

You see, my parents, while not generally strict, did cling to certain old-fashioned principles of proper behavior, among them that you did not watch TV during dinner, AND you ate everything on your plate before being excused. The night Part Two of The Hobbit aired, pork chops were served, a food that, as I child, I just couldn't bear (note: I have no problem with them today... just one of those quirky childhood things). 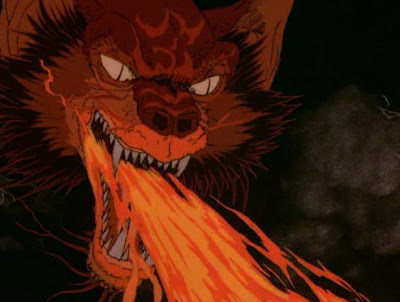 So after stalling as long as I could over my plate (all the while hearing the program's audio from the TV in the next room) I finally tried to force down the (by then cold) pork chop, only to reflexively throw it up all over the table. My Dad, not amused, sent me to bed as punishment, and so I never got to see Part Two of The Hobbit. 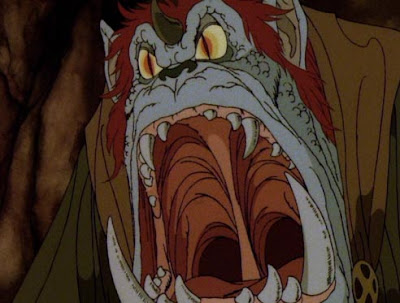 No videotaping or reruns back then, kiddies. I would have to wait several months before finally experiencing the conclusion of the Rankin Bass adaptation, after randomly receiving the storybook record album as a birthday gift from an aunt. Listening to the highly abridged audio while flipping through 12 pages of film stills was a weak substitute, but it was all I had. 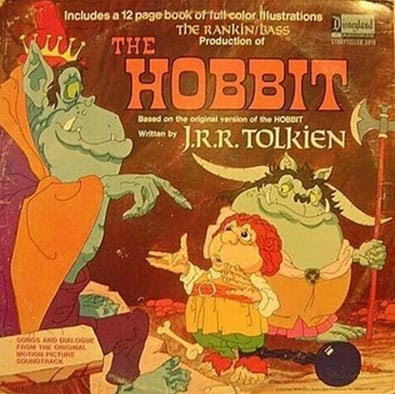 The incident, with its elements of strict parental discipline and harsh punishment, has all the makings of one of those Struwwelpeter-esque cautionary tales for children.

Hmmm.... I'm beginning to like the sound of that! 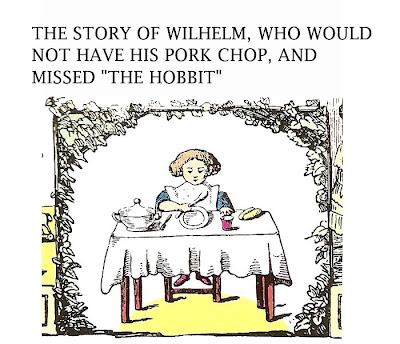 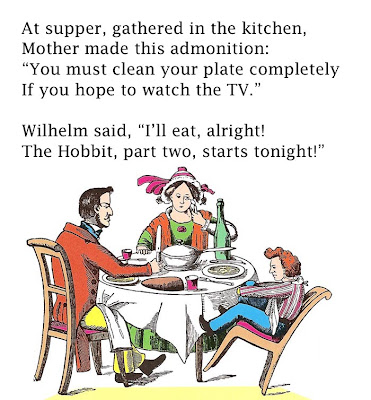 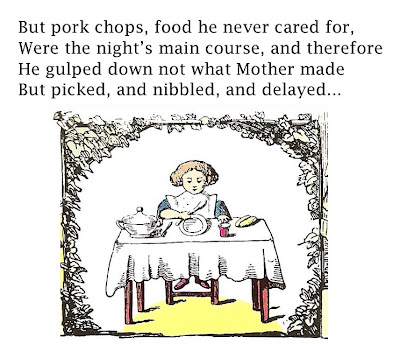 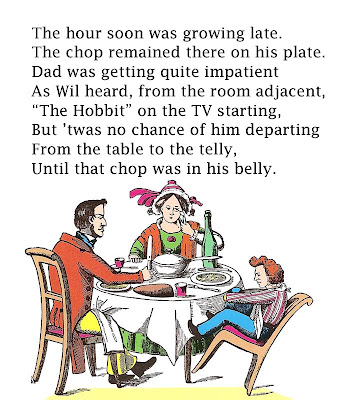 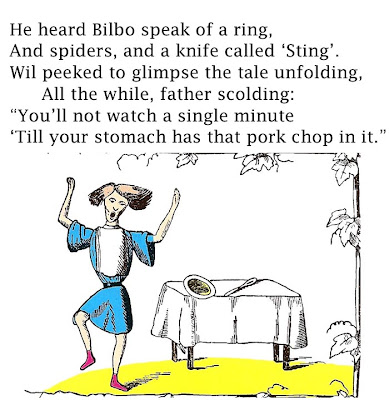 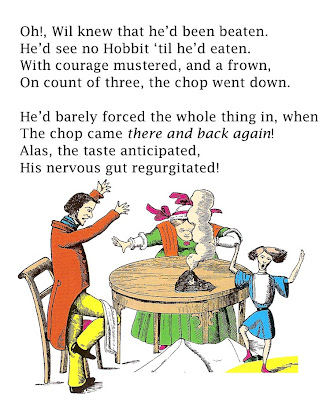 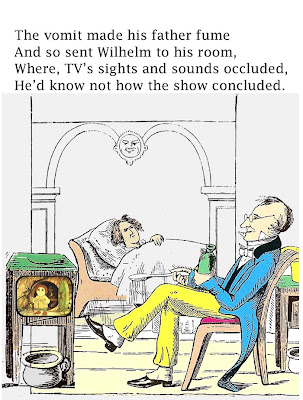 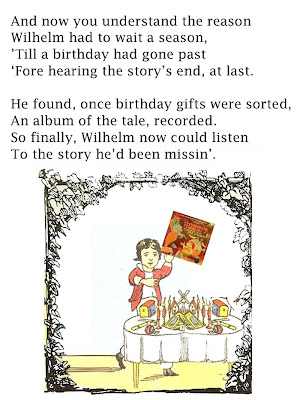 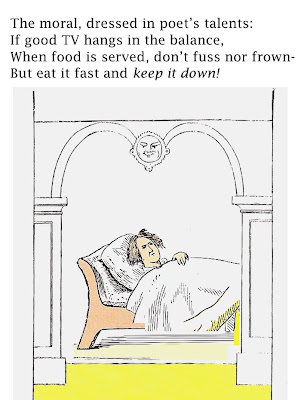 That was a great blog post....I am still smiling. Thanks SO much for sharing that. You are very, very clever.

Side 2 of the LP has such a scary opening -- "I awoke the next morning to a hideous surprise!" (CREEPY SPIDER SFX) Makes me shudder to this day.

The Frog Queen: Thank you so much! Glad you enjoyed!

Propagatrix: Yes, and the transition is just as abrupt in the actual film...one minute he's sitting in the treetops looking at butterflies, then WHAM he's wrapped in webs in a cave somewhere... there almost needed to be a Grindhouse-esque "SCENE MISSING" placard in between.

I remember The Rankin-Bass version of the Hobbit back in the fourth grade too--it was a big event, abut I on't remember it being split in two. There was huge Tolkien revival going on back then.The next Christmas, I got the illustrated edition of the book, chok full of pics from the TV special. It was also the longest book I'd ever read, and much better than the special itself.

The animation in the Hobbit, and later in the Two Towers, is spectacular. I've got to get a hold of it on DVD/Blueray.

My parents made us watch "The Hobbit." and I'm glad they did. They enjoyed the book so much they thought we would like the movie. However, I will never forget my dad changing the channel halfway through "The Star Wars Holiday Special."