Fantastic Planet, a surreal piece of animation that I first became aware of when I caught scenes from it on the 1980s late-night clip-show Night Flight. 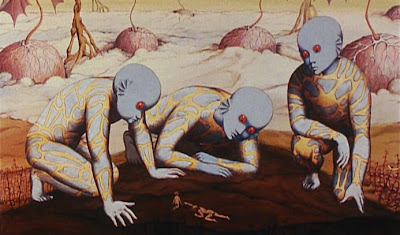 Based on a novel by Stefan Wul, and created by French director Rene Laloux, Fantastic Planet follows a society of aliens, the Draags, (whose cold, emotionless faces might send a chill up your spine) and tiny creatures called Oms, which resemble primitive humans. Tame Oms are treated as pets, playthings of the Draags, while wild Oms live in clans hidden in the alien wilderness, and are viewed as unwanted and dangerous vermin. 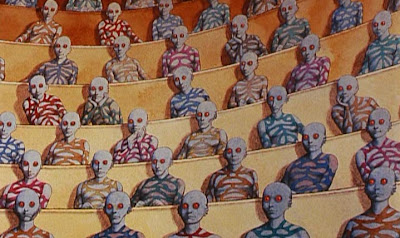 The Draag culture seems mostly preoccupied with meditating, which is portrayed as part yoga, part hallucinatory head-trip. A particularly vivid meditation session is pictured below. 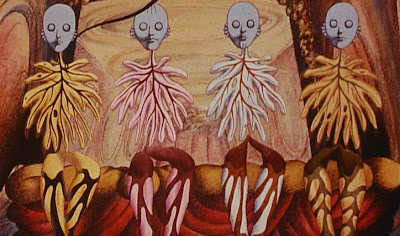 Outside the Draags city is a surreal alien landscape that would look right at home on a 70s era prog-rock album cover. 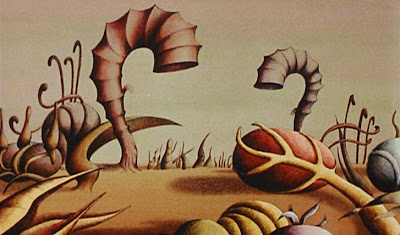 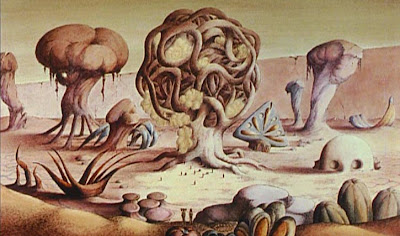 It's not hard to imagine these trippy landscapes painted on the side of a Chevy van, en route to a Pink Floyd concert... 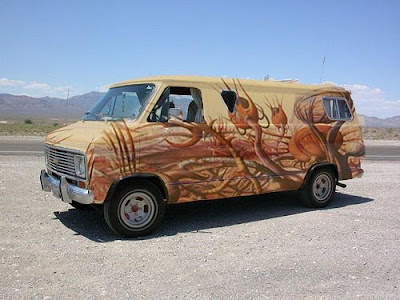 The film takes time out to show us the alien wilderness where the wild Oms live. It is populated with strange and dangerous wildlife.

Like this little bird that lights on an otherworldy tree-branch... 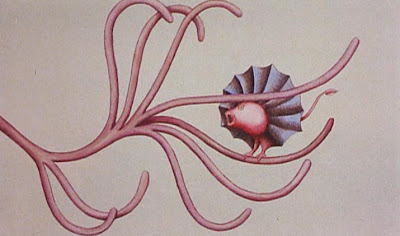 ...which is actually an appendage to this larger animal that appears to be rooted to the ground like a plant. Its exoskeleton resembles a bird cage, through which it snakes its branch-like arm, trapping and shaking the little bird to death. 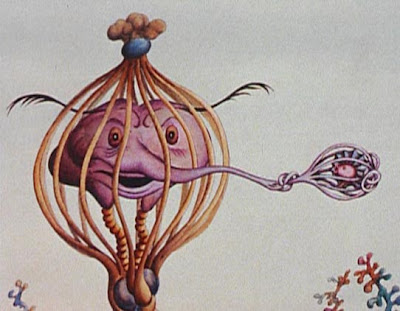 But it doesn't eat its prey, instead pointlessly tossing its lifeless body to the ground with a chuckle. 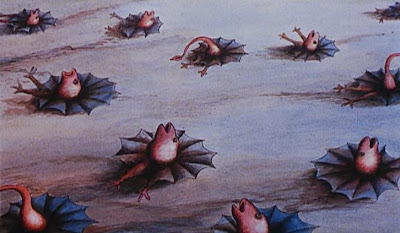 In a darkly humorous variation of the circle of life, this cute little creature hatches from its egg... 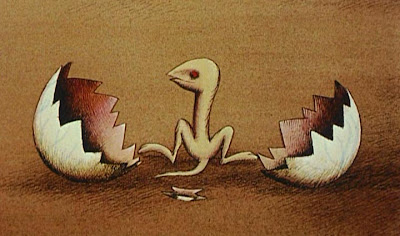 ...and is approached by this hippo-like beast which may or may not be its mother. 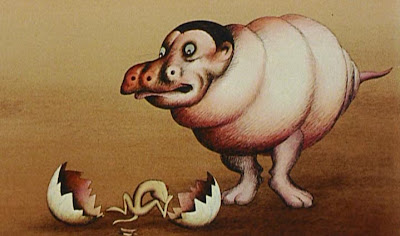 After giving the newborn cutey a tongue bath... 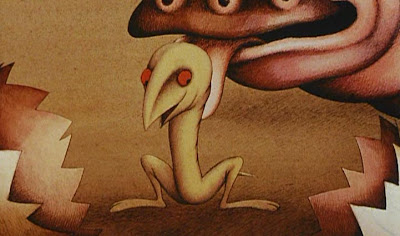 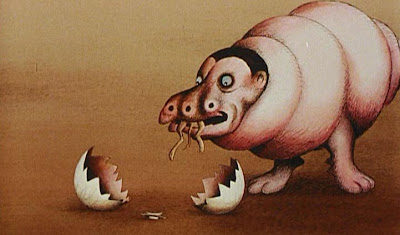 This stalking creature seems content to mind its own business, methodically stepping across the sand while ignoring the pair of tiny Oms underneath. 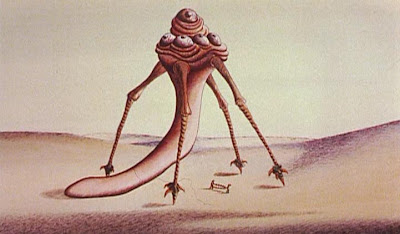 Oms are treated as disposable among the Draags, but it seems the life of an Om has little value even among their own kind, as they use these tiny vicious biting things as a way to permanently resolve conflicts within the tribe. 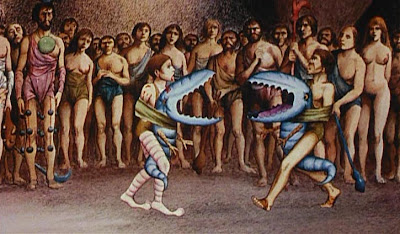 Not all creatures outside the city are a threat. These little guys spin strands of material that can be used for garments. 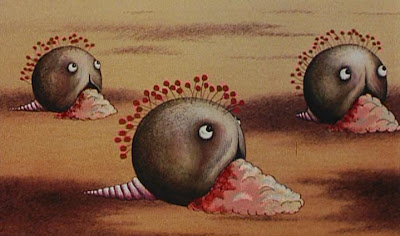 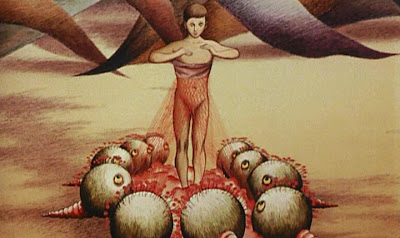 Siren-like shrieks herald the arrival of the most terrible of all the alien animals...this large reptilian bird that is part pterodactyl and part ant-eater. 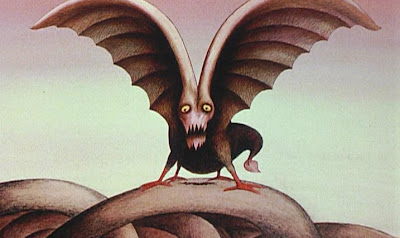 With its gaping, shovel-like maw, it digs into the Oms subterranean caves... 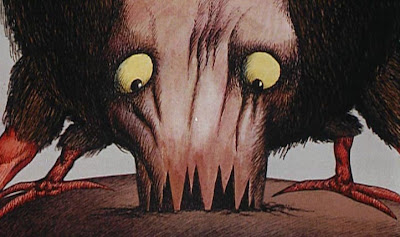 ...and feels around for Oms with its bladder-like tongue... 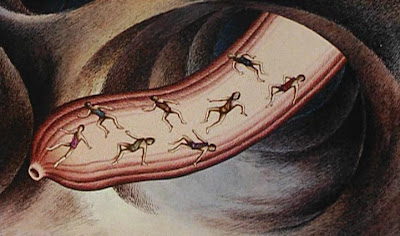 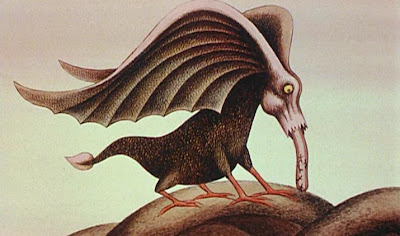 It's horrible face is the thing of nightmares... 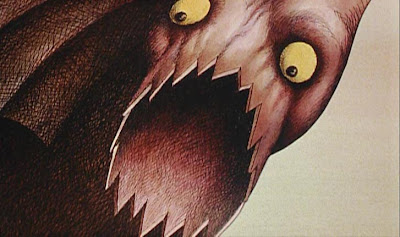 At one point, the Draags decide to implement an aggressive plan of extermination, venturing outside the city walls to wipe out the wild Oms once and for all. These Draags are leading trained Oms on leashes, tracking wild Oms, then attacking with poison gas. 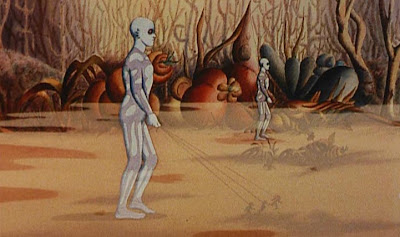 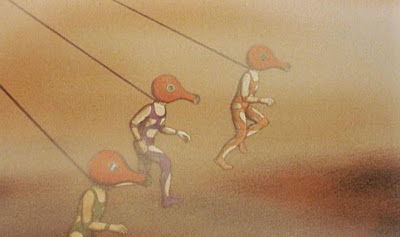 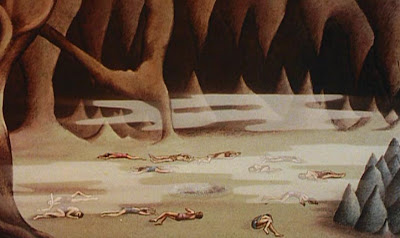 Other technology at the Draags disposal are these robotic rolling spheres, decorated with the flattened corpses of dead Oms. 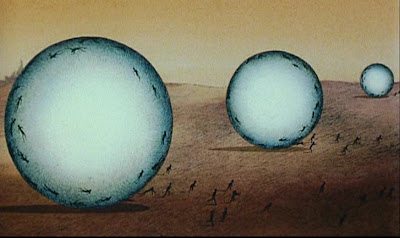 These rocket-like machines shine a light that kills Oms on contact. 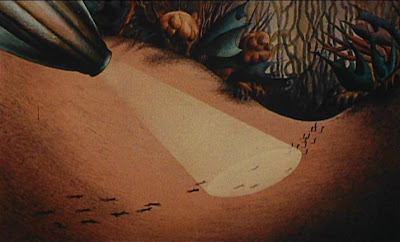 A vacuum sucks Oms right out of their caves... 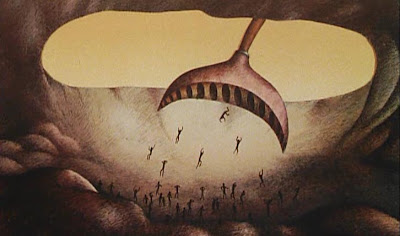 Another version of the vacuum sucks retreating Oms and impales them instantly in a toothed grate. 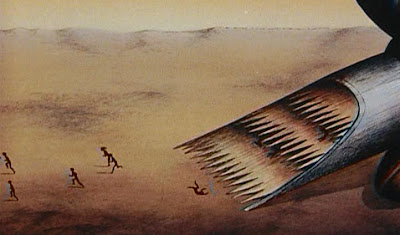 If you seek out Fantastic Planet on DVD (which is out of print as of this writing), go for the 35th Anniversary edition (the earlier edition DVD has the subtitles burned into the image, and they can't be shut off. The 35th Anniversary edition allows you to turn captions on or off). Normally I advocate watching foreign-language films in their native language, using subtitles. But Fantastic Planet is a rare exception--there is a certain distant sterility in the English dub performance that I think adds to the surreal experience.
Posted by Brother Bill at 4:20 PM

OMG. I loved Night Flight! Where else could you find things like this mixed with RATT videos?

I remember seeing this on Night Flight. It used to creep me out. And looking at theses still frames, I'm getting that creeped out feeling right now.

I never sat through the entire film. I feel like I should though, if I get a chance. Just for the experience.

I love it everything about the animation is amazing