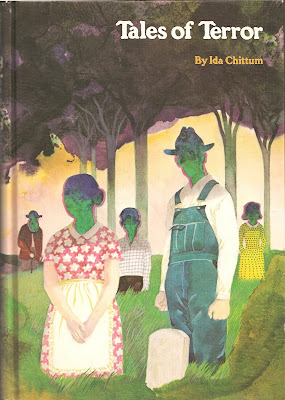 Tales of Terror (1975, by Ida Chittum, illustrated by Franz Altschuler), is a collection of ghost and monster stories told and set in the mysterious backwood hills of the Ozarks.

Similar enough in design, tone, and size to be considered belonging in series with three other children's horror anthology books published by Rand McNally in the 1970s (the other titles being Baleful Beasts and Eerie Creatures, Horror Tales and Monster Tales), these stories definitely have their own unique flavor that sets them apart. 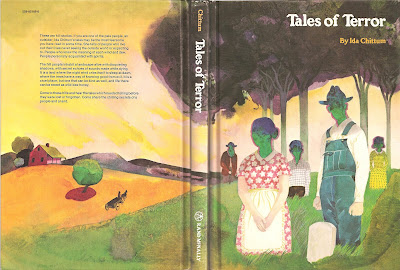 The beautiful, yet vaguely disturbing illustrations perfectly capture the tone of these tales of drowned children, restless ghosts, magic spells and malevolent wildlife. 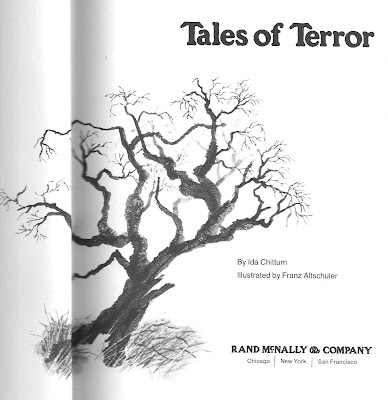 The complete contents are (all stories by Ida Chittum):


I'll let the illustrations below speak for themselves and won't summarize any stories here. But I will share a passage from one story, The Cruel Girl, which haunted me long after reading it for its unflinching depiction of childhood evil:

No hurt was too small for her to overlook. She mocked every word of a
first-grader who stuttered, until he quivered at the very sight of the schoolhouse door.

Any child feared showing a liking for any living thing, as Emmadean was sure to get hold of it and put an end to the creature in some unspeakable, slow way. New, helpless puppies were thrown headfirst into thorn bushes. Kittens were sunk in the creek, revived, and sunk again.

Dark stuff. As a child, that image of puppies being thrown into thorn bushes buried itself into my subconscience and stayed there long after I'd forgotten that it came from this book. 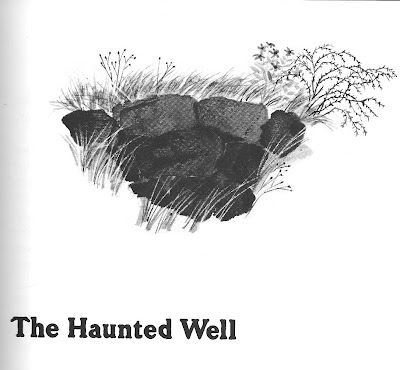 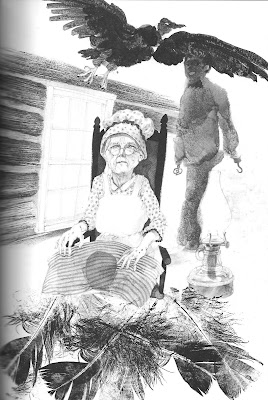 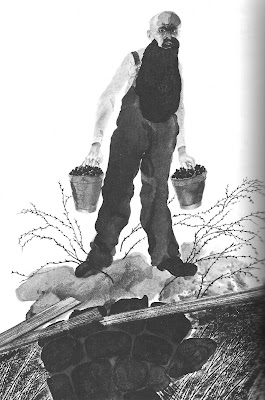 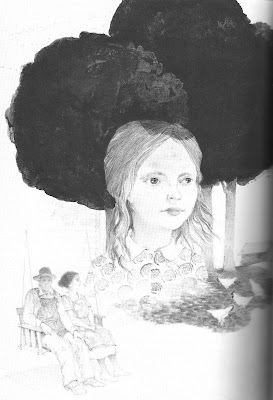 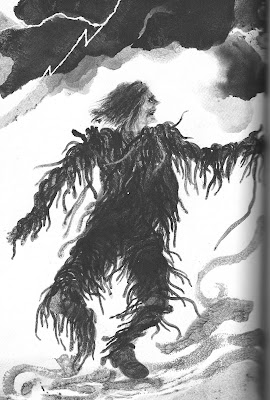 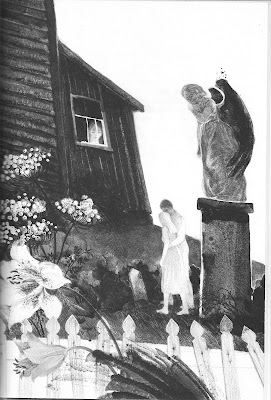 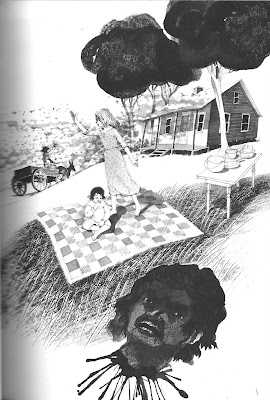 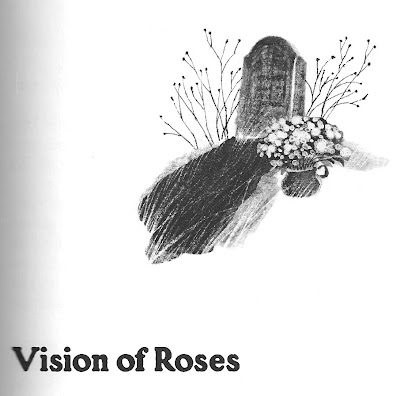 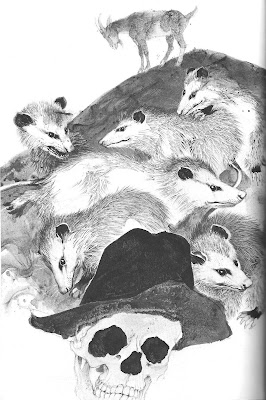 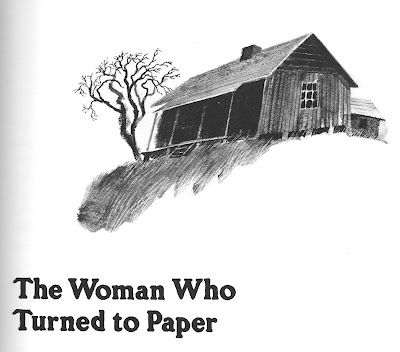 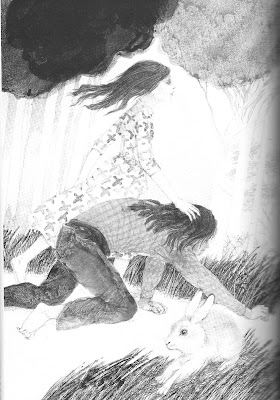 You comments and insights are right on. Ida Chittum is my mother, now deceased, and this collection contains her best writing. Thanks for the wonderful use of the art work and the quote. Many of these stories are directly from her own childhood: the story of the beheading is based on an actual experience. Mom saw dead people. This was just one instance. My email is sammechittum@gmail.com

I loved "Tales of Terror." Many of her stories stayed with me and she had an influence on my writing. Even though I'm older now, I want to find a copy of her book to replace the one I lost years ago.

Based on true experiences? Wow. That gives the stories an extra depth. Some of them were so haunting and sad. And that certainly explains why they have such power even now.

Wow, that's amazing! I have a couple other books by your mother, but decided to post on Tales of Terror because it's the one that affected me the most as a child. Thanks for stopping by.

When I was younger I lived in southern Illinois, not far from the Ozarks that Ida Chittum depicted. We checked Tales of Terror out of the library over and over and it stuck with me down the years. The stories were weird and eerie but had the ring of truth to them as well. Some were so sad and beautiful and others were full of dark humor. In our family we often refer to Uncle Ned Kunkel as though he were a relative. And that cover with the faceless people and the illustration that goes with the first story about the house that didn't get moved into are still some of the scariest pictures I can dream up.

Thank you so much for this post. I bought this book in my early teens and read it to my younger brothers many times, who loved these stories as much as I did, and we still share them as ghost stories with friends. I have been looking for another copy of this book for years as, alas, the old one is lost. Stories of terror and the unreal were woven deeply into our childhood and the creepy, sad and dark tales of Ida Chittum were among out favourites.
PS- Note the date of this posting... Happy Halloween everyone.

Thank you for this! I have been searching for "The Haunted Well" for 25 years or more, never knowing the book title, author or publisher. When I saw the illustrations I knew instantly that this was the one.

Ida Chittum also wrote The Thing Without a Name, which scared me into incoherence when I was a child. Ah, childhood.

I remember being terrified by the drawing of Sod Miller as a child, although he now looks less scarier than my recollections. Interestingly, there was a store many years ago in N. Idaho called Uncle Kunkle's, which sold dentures. The dentures were in a large barrel, and customers would try them on until they found the right fit.

WOW.
WOW.
i have been looking for "tales of terror" with the farmers with no faces on the cover since i left elementary school. this was available in my school library in tiny little ball ground, GA, so the southern mountain vibe of the book really hit home. my sister checked it out first and then i did and then we would actually read these stories at the kitchen table! i still remember the about the well. WOW. what a great blog. keep it coming!!!!!!!!!

Great Post. I discovered "Tales of Terror" in the bookstore as a child and was too scared to buy it, yet I couldn't stay away and went back to look at it week after week. Finally my sister bought it as a gift for Halloween, 1980. I still have it today, though the copy is very worn and covered with my childhood scrawls and drawings in the margins (often inspired by the eerie stories and illustrations) as well as those of other kids who'd borrowed it and added their own comments. :) It's a prized possession now that can't be replaced.

Count me among those who read this as a child and have been trying to rediscover it for years. I occasionally go on little scavenger hunts around the Internet, possessing basically no information other than a vague memory of one of the stories.

The moment I saw the illustrations here, I knew I had found it, so thank you very much. Now if I could only find a copy. It shares an ISBN with what appears to be an encyclopedia from 1985 or so, making it very difficult to track down. I think I can have it shipped to the library near my house.

Samme should consider converting them to eBooks!

A short chat with one of my students before class prompted me to take out my Tales of Terror book to show her, which then led me to your blog. I'm proud to say that my copy is now 30-years old, a little frayed, sure, but in otherwise really good condition. :-) This book has survived five moving houses and a toddler who's now 18! Thanks, Ms. Chittum, for haunting my childhood with wonderful, scary stories! My email is sundaecone30@yahoo.com

- Terri from the Philippines

sophia, if you have the time and inclination, I'd love to hear more details about the chat that led to you introducing that book to your student (and what her reaction was!)

Ida Chittum is a sage in horror stories. It is a cunning artful piece of work; kindling inspiration from within.

I just began reading this book last week can't get enough of it...i had to read it again. ;)

Hello, Brother Bill,
My apologies for the so-late reply. I was expecting to be updated through my email, so i didn't bother to check in again till tonight. What led me to show my student my book? Hmmm... I think it was because she mentioned ghosts, and I jumped at the chance. I claim bragging rights to having this book after all these years, and by showing it to my students, I teach them how it's important to take care of their books. Of course, the stories in this book are timeless, so any excuse to fish it out is good. :-)

I was talking to a friend about "the little old lady that lived down the road from me. She had a black bird (which I thought was a crow) and wrote one of the scariest books I've ever tried to read."

I couldn't even remember her name, let alone the name of the book. I had to google it and that's how I came across your "review"!
Now the faded memories are coming back to me...

I was around 6 or 7 when Mrs.Chittum gave me a signed copy of a book. I have to assume it was Tales of Terror... I don't think I read very much of the book, only enough to realize I was scared beyond belief!!! I have no idea where that book went, but after 30+ years, it was probably tossed away. Sad. For this, I am sorry!

As I said, Mrs. Chittum lived down the road from me, in a very tiny town in Illinois. As memory serves (again, from the mind of a very young child) she lived in an old Victorian house. How fitting! I'll have to check facts with my parents to find out if that is true or not!
I remember being scared to death after a visit to her home. She told us a story (could have been from one of her books, I don't know) of the monster that would grab the uncovered feet of kids & drag them off, never to be seen again... I was never so scared in my little life!! I couldn't peddle my bike fast enough to get home...
and to this day, I cannot sleep with my feet uncovered!!! LOL ... I'm 43... LOL

Thank you for this "review" and for helping me remember a very important part of my childhood... to remember that my tiny hometown had a very special lady amongst us!!
I'm thinking of getting Tales of Terror for my 12 year old daughter. And I'll likely get the rest of Mrs. Chittum's books, as well!!

Hi Everyone:
It's Samme Chittum, Ida's daughter. I am starting a Facebook page in my mother's name. For those of you who are interested, mother was the real deal. She had mediumistic gifts, or as they now say, she talked to and saw the dead. Many of her stories are based on real people and events. You can see photos of Ida on her FB page!

Please, PLEASE, can anyone help me find an affordable copy of Tales of Terror, to give to my very special daughter, as a very special gift? She has said many times that it was and is her favorite book! She is 40+ now. grannyjohnson531@gmail.com

Where can we find these, please?