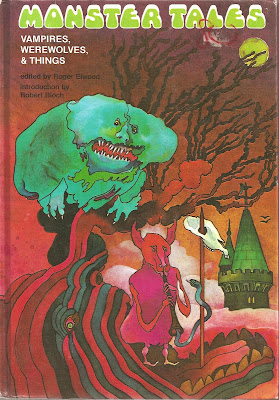 Fans of "Baleful Beasts and Eerie Creatures" would do well to seek out another early 1970's children's horror anthology, "Monster Tales: Vampires, Werewolves, and Things" (1973, edited by Roger Elwood, illustrated by Franz Altschuler). 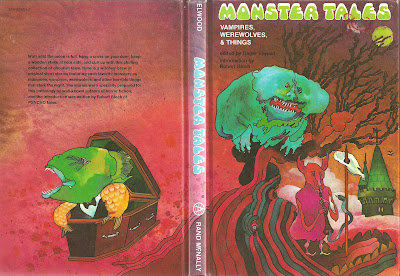 The two books are so similar in design, binding and size they could almost be mistaken for belonging in series. "Monster Tales" sets the tone with a short introduction by genre author Robert Bloch (probably best known for penning the novel "Psycho", but with a huge resume in books, television and film). We then get six stories by six different authors, all illustrated in wonderful black and white. 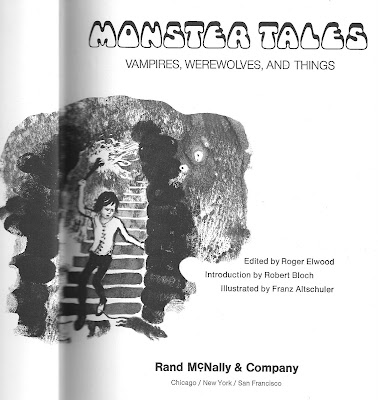 The complete contents are:

Like "Baleful...", the first story of "Monster Tales" is also the stand-out: "Wendigo's Child" by Thomas F. Montelone. 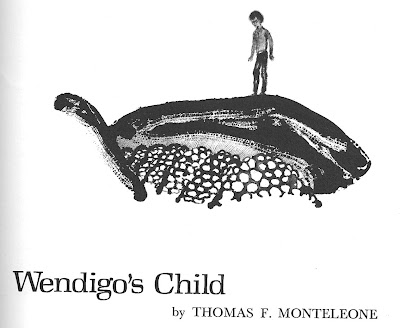 Set in Corona, Arizona, we follow young Marty Alvarez as he sets out to explore an Indian burial ground recently uncovered just a short bike ride's distance from home. Hoping to discover arrowheads or other artifacts, Marty instead finds buried a small mummy that appears to be part human, part bird. 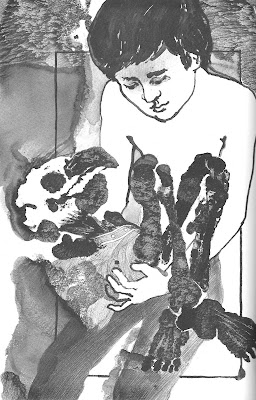 His stomach churned as he uncovered the thing, and he pulled his trembling hand away--he had almost touched it. It looked vaguely like a little baby, with its curled-up legs and thin, sticklike arms. It was about two feet long and covered with dark brown skin that looked like cracked, dry leather. The head was like a human skull, but instead of teeth, it bore a sharp, curved beak like a big
bird... The eye sockets were empty--big and dark and round, but the face seemed
to be almost grinning.

Convinced he's made an important archeological find, he wraps the thing in his shirt and takes it home in the basket of his bike. Along the way, Marty stops by an Indian friend, Charlie Longhand, in hopes of learning more about his find.

After asking Charlie a vague question about Indian mummies, we learn of an old Indian legend of the "Wendigo", a fearful god that was part man, part reptile and part bird. It was said that when a child died, its buried body would sometimes transform into a child of Wendigo to protect the graves from harm.

Once home, Marty stashes the mummy in his cellar overnight. But the creature's presence has disturbed his dog, Digger, who is now howling endlessly in the backyard. Hoping to assure Digger there is nothing to be afraid of, Marty leads the dog into the dark cellar, armed only with a flashlight. But the Wendigo is missing! Or is it?

He heard a sound. And then another. Several loud, snapping, cracking sounds cut through the darkness and burned his eardrums. They were followed by an oozing, soft, gurgling, slurping noise.

Marty and Digger never do get out of that cellar, by the way. Scary stuff.

Below are the illustrations from the other stories. I'll detail these stories in a later post. 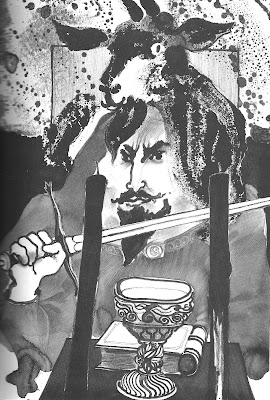 Call of the Grave: 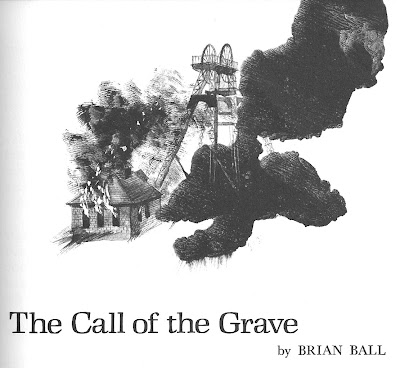 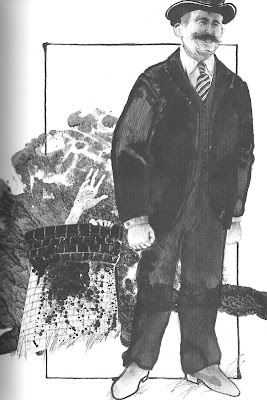 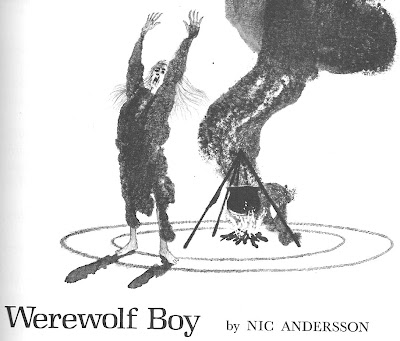 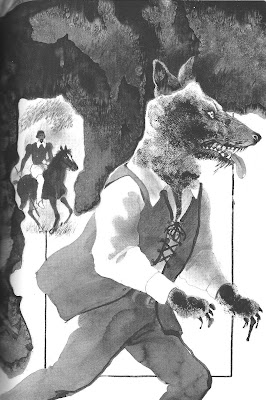 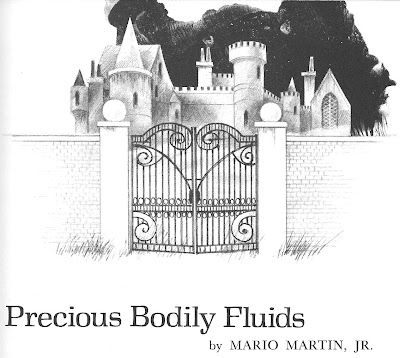 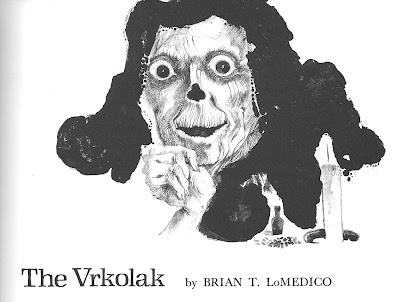 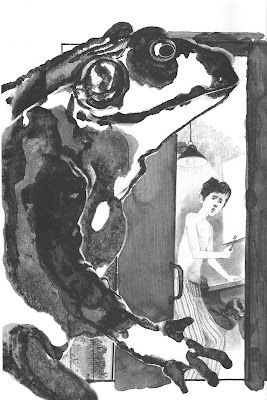 Oh my word, I started an internet search for this book based on my incomplete recollections of reading it as a child... your post brought back a flood of memories. Thanks for the scans and the recap!

Hot damn! I took this book out of the Lewis F. Soule elementary school library over and over and over again. To this day I remember being absolutely freaked out by the ending of the Wendigo story... now I'm off to order a used copy of the book from amazon.com... hooray!

NICE! I just bought a used copy of this book on amazon....one of the first books that totally creeped me out when I was little (thank you, Wendigo's Child).

Was searching for Wendigo's Child so I could properly retell it to my son. It's even creepier than I remembered! Thanks

Got this book from my grandmother, it scared me half to death, would always have nightmares of me being in the boys shoes at the end of Wendigo's Child. I was so afraid of the book and it would so easily conjure bad dreams and memories that for a while I couldn't even be in the same room as it. Still have a copy but it is falling apart. Considering getting the wendigo as a tattoo concept.

Got this book as a child from my Nana, never got past Wendigo's child because it scared me half to death. I had reoccuring nightmares of the ending of Wendigo's child to the point where I had my grandmother hold on to the book because I didn't even want to be in the same room as it. Found it at her place years later, and now that she's gone i'm considering getting the wendigo pic as a tattoo concept

Awesome! Thanks for posting this. I was crazy about this book as a kid. I read it constantly and it would scare the hell out of me.

Returned this book to the school library and swore I was too scared to ever look at it again!

Decades later, giving it another shot will be a great treat this Halloween season. Thanks!

Hah...it's amazing how many of us went looking for this story decades later...I remember this being one of the most chilling things I read as a child, particularly since we had a deep dark basement. Thank you so much for posting this, now I can go reread it!

Had to comment as well-I've been searching for this book for so long. Will never forget reading it over many times in 3rd grade at the school library-the illustrations have always stayed with me. THANK YOU!

Like the other posters, I read this in elementary school and remember some of the stories vividly. I have been looking for the Wendigo story for years. The following Google search brought me here :"short story about a boy indian artifact basement creature bird monster" thanks so much for posting!

My brothers and I read this book together back in 1984 after I checked it out from the school library. The most disturbing horror story I encountered as a kid, still giving us nightmares today! I can't believe I found so many others with the same memory. Getting my copy of the book now!

FInally I found the Wendigo story! Thank you!

Now about the one with the image of the Dragon in the book on the pile of skulls that can't be opened between dusk and dawn!

This book terrified me as a kid, but I couldn't stop reading it. Wendigo's child is probably the first story I remember reading that ends...badly for the protagonist. The good guy didn't win, and it freaked me out.
Thanks for the memories!