Words Every 6-Year-Old Should Know...

aura
force emanating from somebody or something: a force that is said to surround all people and objects, discernible, often as a bright glow, only to people of unusual psychic sensitivity

cadaverous
of corpses: suggesting death or corpses ( formal or literary )

manifestation
materialization of spirit: a supposed appearance in visible form by a spiritual being

requiem
commemorative music: a piece of music written to commemorate somebody who has died

supplication
appeal made to somebody in authority: a humble and sincere appeal to somebody who has the power to grant a request

Do these words seem a little advanced for a six-year-old? And yet I knew them (well, most of them), thanks to Xavier Atencio. He's the Disney animator-turned-Imagineer who wrote the script for the Haunted Mansion attraction at Disneyland, as well as the long-playing record that dramatizes it.

When I was six, my Dad surprised me one day with the album, titled "The Story and Song From The Haunted Mansion." It became my favorite possession, and despite literally hundreds of plays, survived into adulthood without a scratch.

Rather than write down to his intended audience of children, Atencio wrote some of the most elegant prose ever associated with a theme-park ride. If that meant a young listener had to check the dictionary, or ask their parents what a word meant, so be it. Check out this excerpt from the gallery scene:

Even in this flickering gloom, your cadaverous pallor betrays an aura of foreboding. Your trusting mortal eyes tell you that these walls are stretching. But logic says, "No, 'tis mere hallucination."

Or this scene just after the seance, when the ghosts, previously only suggested by sounds and moving objects, finally become visible:

Come now. We must leave this cozy little circle, for the spirits have received your sympathetic vibrations and are beginning to materialize. 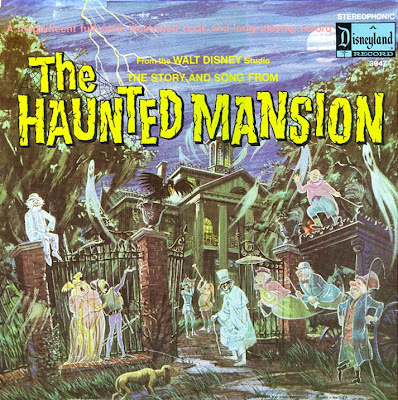 "The Story and Song From The Haunted Mansion" has been very well documented at one of the greatest websites of all time, found here.

UPDATE: This album finally saw an official release to CD in August, 2009.
Posted by Brother Bill at 8:26 PM