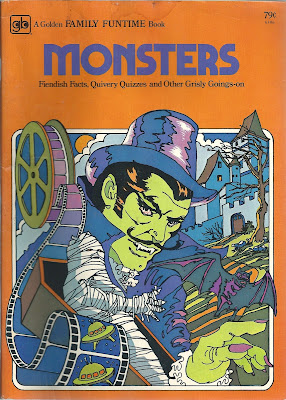 This entry in the "Golden Family Funtime" series is called (take a breath...) "Monsters: Fiendish Facts, Quivery Quizzes and Other Grisly Goings-on", a collection of essays, puzzles, games and trivia revolving around all things monster. Written by Donald F. Glut (he also wrote, interestingly, the novelization of The Empire Strikes Back, among other comic and horror titles for kids) and illustrated by Dennis Hockerman (cover only) and Carole Jean Bourke (interiors), "Monsters" offers a fairly comprehensive overview of the monster genre with an emphasis on their presentation in books and films, padded out with a little cryptozoology for good measure. 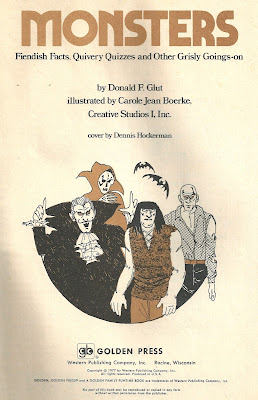 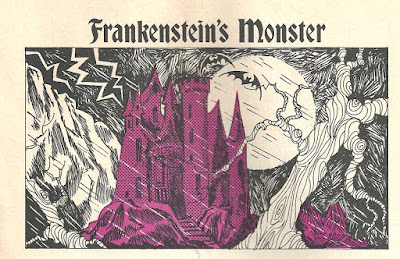 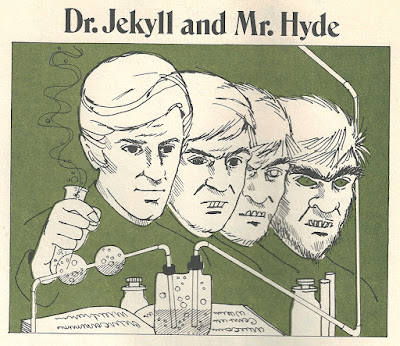 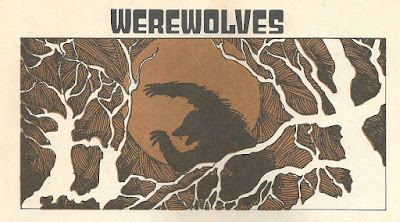 Werewolf indicators. Keep the tweezers handy if you want to pass for normal. 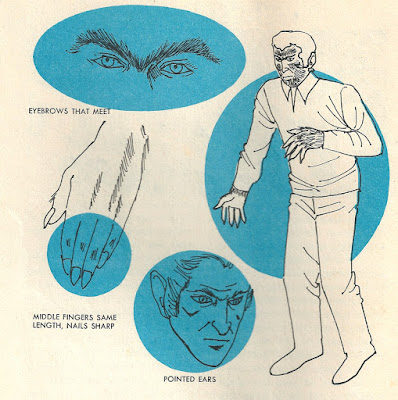 A depiction of the burning at the stake of accused werewolf Stubbe Peter, Germany, March 31, 1590. 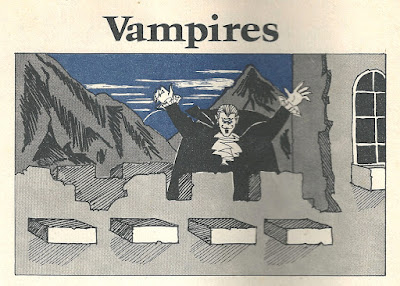 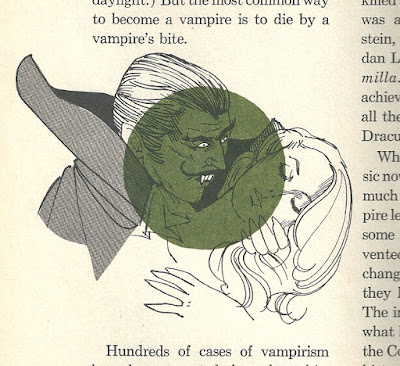 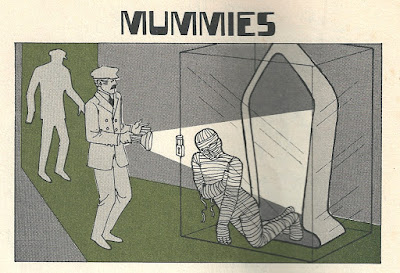 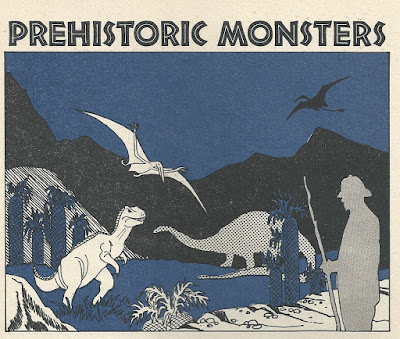 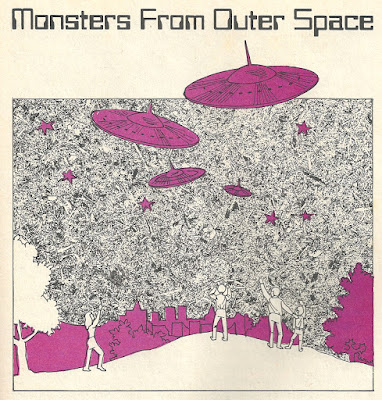 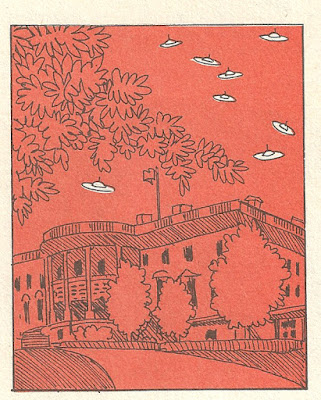 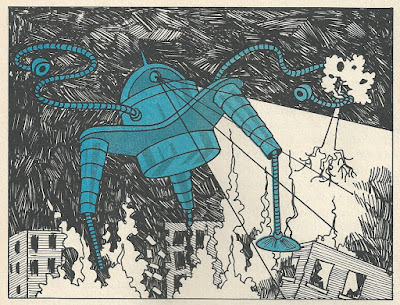 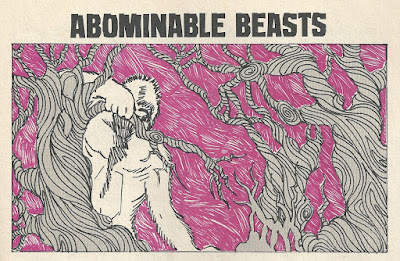 The quizzes revolve around monster movies and are actually kind of fun and require some knowledge of the genre. "Creature Color Contest" asks you to complete the movie title with the correct color name. 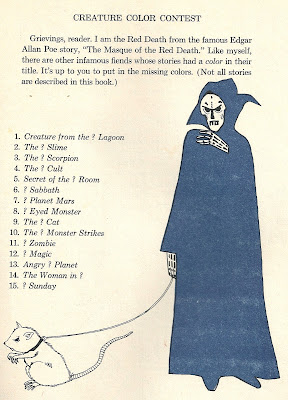 "Dracula's Countdown" is the same concept, but using numbers selected from a list. 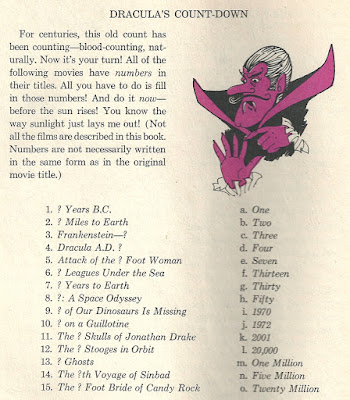 Simbar the Werelion (a character from the comic book "The Occult Files of Dr. Spektor") challenges you to match the actor to the monster they portrayed. 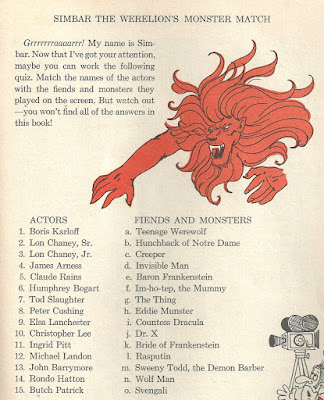 There are a few visual puzzles as well, challenging you to find hidden animals in a drawing (The 13 Black Cats and Find the Missing Werewolves)... 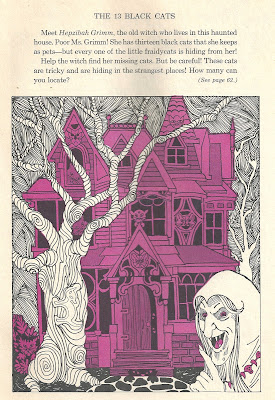 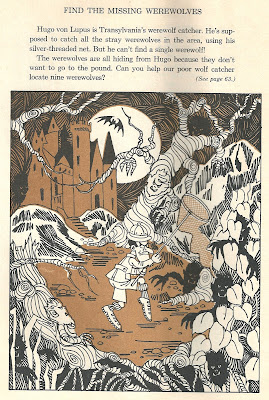 ...plus the party game where you stare at a picture for a period of time and then are expected to answer questions about details of the picture from memory (No Hyde-Ing Place). 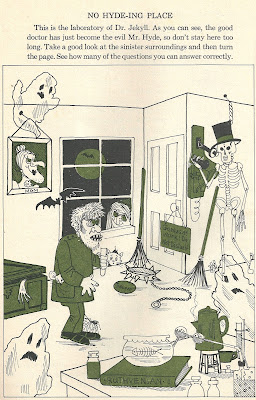 Optical illusions and magic tricks are found here as well, including the severed-finger gag I remember from Spooky Tricks (presented here as Frankenstein's Finger). 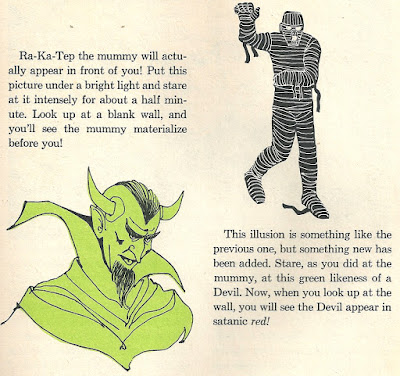 There's a board game "Escape To the Castle" that takes up a two-page spread... 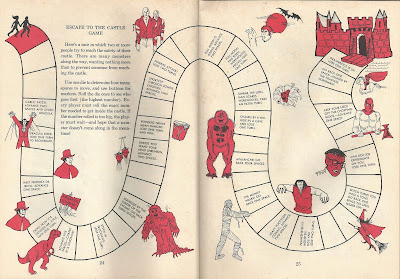 ...and finally, Sinister Shadows demonstrates how to make Godzilla, a werewolf, vampire bat, and other monsters with your hands. 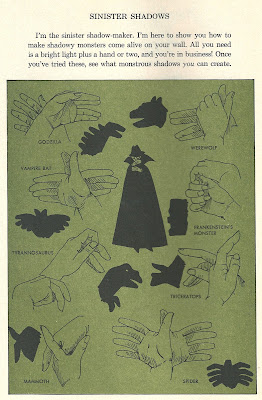 Other entries in the Golden Family Funtime Books series focused on crafts, games, magic, and riddles. Take a look at that funtime family! 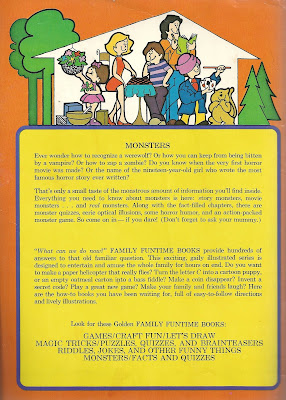 Land of the Lost Illustrated Timeline at We Are The Mutants 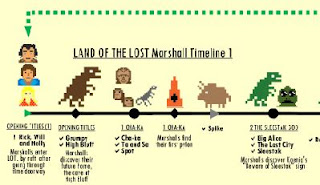 As a life-long Land of the Lost fan, I'd been toying with the idea of putting together a timeline chronicling the arrival and exit of all the characters, and tracing the various temporal manipulations and paradoxes created by the matrix tables and pylons. Well, I finally found an "excuse" to stop toying and start timelining when the creative mind behind one of my favorite blogs 2 Warps To Neptune invited me to contribute content to his newest venture, We Are The Mutants.

I actually rewatched the series in its entirety in order to put this timeline together, and it's BIG. Too big to print. But hopefully you'll find it fun to examine and explore through the viewscreen of whatever inter-dimensional machine you use to view The Internet. I also wrote a rather longish piece on the series itself that delves into some of the shows headier concepts and plotlines (masochists can read it here).

You'd do well to bookmark We Are The Mutants, too, especially if you are a fan of Gen-X era sci-fi, fantasy, toys and tech.
Posted by Brother Bill at 7:33 AM 2 comments: