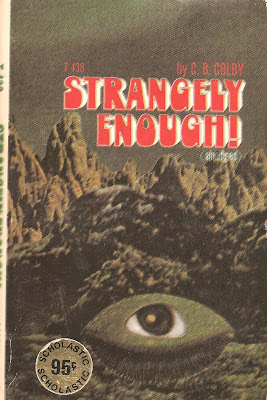 Strangely Enough is a collection of unusual tales, "good yarns" and stories of the supernatural, collected by writer C. B. Colby, who, according to the book's preface, used to run them in his newspaper column, "Adventure Today."

Illustrated by David Lockhart (save the unusual alien landscaped cover of the edition pictured here, which is by Harvey Parks), Strangely Enough was originally printed in 1940, but has resurfaced in various editions since (the copy pictured here is copyright 1963), although I somehow managed to miss this title when it turned up as a selection in the Scholastic Book Club in the 1970s, and only recently became aware of it thanks to a recommendation by reader Jeanlass.)

Colby makes no attempt to either validate nor debunk any of the stories here, presenting them without judgment as pieces of entertainment. As he states in the preface:

I think it is better to be like the little old lady who said, "I don't believe in ghosts--but I'm afraid of them!" than never to have enjoyed a bit of spine-tingling at the personal encounter with something for which there seems to be no sensible explanation.

Some of the stories presented here are recognizable from urban legend, while others are alleged to have actually happened. Two of the stories here (one about the ghostly appearance of faces at sea, the other about moving coffins in a Barbados crypt) have reappeared in another collection of supernatural stories, Ghosts-The Eerie Series (1976, Seymour Simon).

Here's a sampling of some of the ninety stories contained in Strangely Enough... 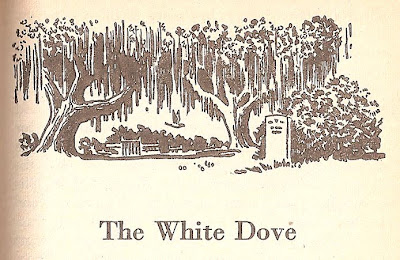 THE WHITE DOVE is a folk tale about a widowed husband whose departed wife returns in the form of a white dove. 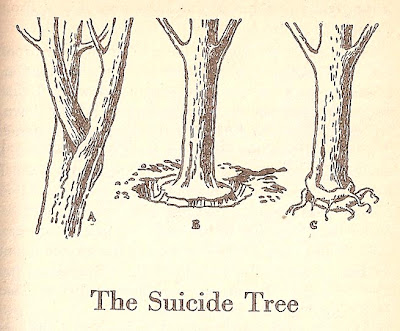 THE SUICIDE TREE is not as sinister as it sounds. The author discusses some unusual trees he's seen, including one that seems to be killing itself by splitting its main trunk with one of its own branches. 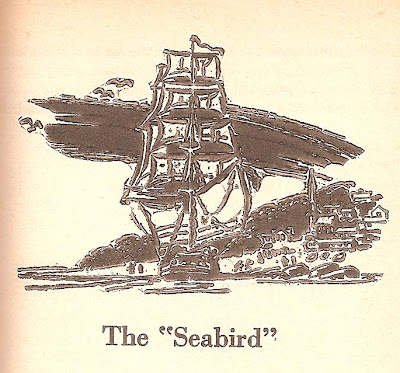 THE SEABIRD is the name of a mysterious sailing ship that, in 1880, beached itself on the shores of Newport, Rhode Island, without a single passenger found aboard. 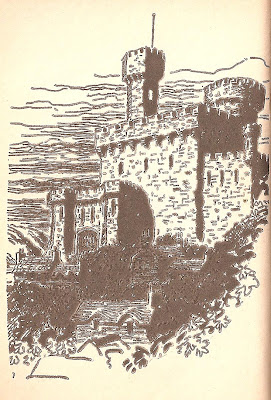 THE LIGHT IN THE WINDOW tells of a haunted painting of a real Scottish castle, depicted with a single lit window. Purchased in a "dingy little store", the buyer keeps the curiosity in his home for many years before noticing the painted lit window has mysteriously darkened, with no evidence of tampering. After researching the history of the castle, he learns the phenomenon is related to a person who died in that room 500 years ago. 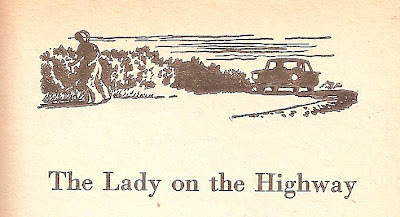 THE LADY ON THE HIGHWAY, one of two variations of the "ghostly hitchhiker" tale to appear in this book, tells of an old woman which mysteriously disappears after having been picked up by a pair of traveling businessmen, who later learn she had died years earlier. 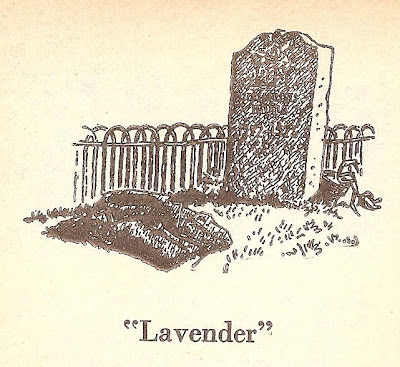 The second hitchhiker tale, LAVENDER, in which the ghostly passenger is lent a coat that is later found lying at the woman's grave. 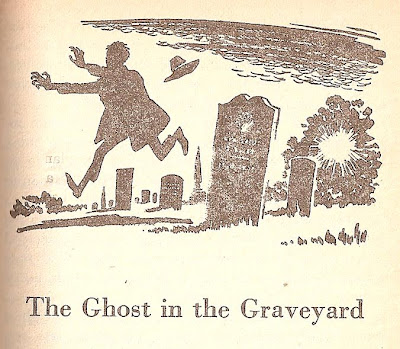 THE GHOST IN THE GRAVEYARD is the humorous story of a frightening white form seen moving in the graveyard at night, which turns out to be the white head of an otherwise black cow. 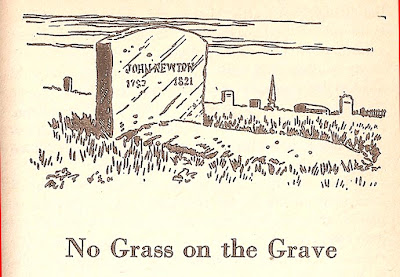 NO GRASS ON THE GRAVE tells the story of John Newton, who, upon being falsely convicted of a crime in 1821, correctly prophesied that no grass would grow on his grave. 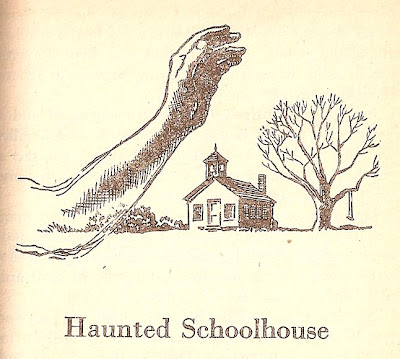 The HAUNTED SCHOOLHOUSE tells of an 1870 haunting in Newburyport, Massachusetts, by a ghost manifesting itself incrementally over several days, first as a glowing light, then a disembodied hand, then an arm, and finally a schoolboy. 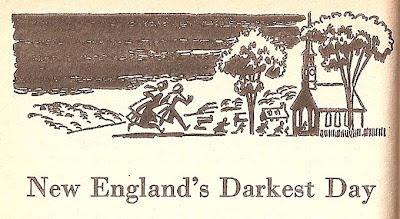 NEW ENGLAND'S DARKEST DAY accounts an unusual dark sky that occurred in the middle of the day in May of 1780. 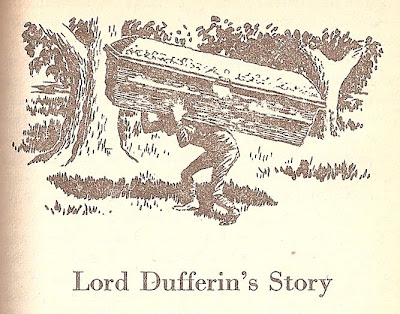 In LORD DUFFERIN'S STORY, presented as a traditional English story of the supernatural, a British diplomat is haunted my visions of a man dragging a casket on his back. He later encounters the same man operating an elevator, a sight so frightening he refuses to board. The elevator subsequently malfunctions, sending several people to their deaths. Variations of this story, in which the mysterious figure drives a hearse, and utters the foreboding phrase "Room for one more...", has turned up in urban legend, and even as an episode of The Twilight Zone, "Twenty-Two". 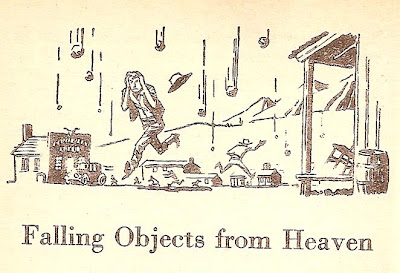 FALLING OBJECTS FROM HEAVEN describes unusual instances of walnuts, stones and even bones apparently falling out of the sky. 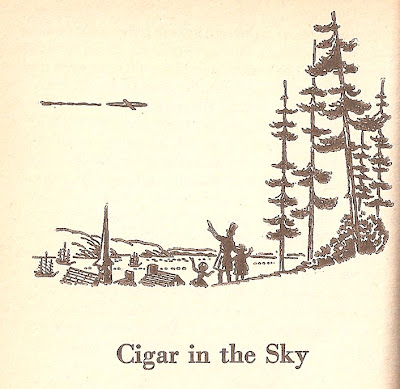 CIGAR IN THE SKY is one of several accounts of encounters with apparent U.F.O.s, this one in 1882, in the skies over Greenwich, England. 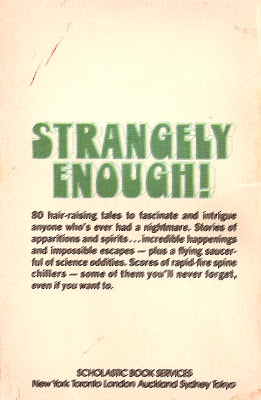 Strangely Enough is out of print as of this writing, but can be had on the second-hand market... strangely enough!... for about the same price as the edition pictured here went for new back in 1963.
Posted by Brother Bill at 9:05 AM

I just love these old books, thanks for the recommendation. Going to have to find one for myself.

There was also an old Bob Newhart Show episode featuring an elevator passenger, dressed in a black coat and hat, who, as the elevator door opens, tells Newhart, "Room for one more." Bob did what I would have done and decided to take the stairs(or maybe wait for the next car). It was a spoof of the Twilight Zone episode of course.

Awesome I used to love this book as a kid, those illustrations bring it all back. The story about the whistling used to give me the heebie jeebies.

You're referring to "The Whistle"... a woman in South Carolina keeps hearing a mysterious whistling sound, but can't isolate the source. One day the whistling is particularly loud, disturbing her little dog.

Then the whistle, and the barking of her dog, are suddenly silenced. She goes out to the back porch to investigate, only to find a splatter of blood on the ground where her dog used to be...

I'm so glad you enjoyed Strangely Enough! Those illustrations are still weirdly evocative for me... especially the arm floating over the schoolhouse...

A few years ago, I became curious about C. B. Colby, probably because he so often shows up in his own tales. I discovered a story worthy of of Strangely Enough, if C. B. Colby had compiled a volume for post-modern intellectuals: http://www.insidehighered.com/views/mclemee/mclemee23

And... strangely enough... last night we rented the Outer Limits disc with "Forms of Things Unknown" because of your blog post from ages ago!

The first story I thought of when I saw the title of this post was "The Whistle." When I first read the book (I read it a whole lot as a kid), a lot of the stories seemed kinda tame or fake, even to my eight-year-old self, but that one was seriously creepy. Somehow, it just seemed horribly plausible.

I work at a single-stream recycling plant, and that book came down the conveyor belt today! SCORE!!! :D

Oh yes- I recently uncovered my copy of this from the 1970s. The tumbling caskets of Barbados was such a great story that I had thought that it must have been a tourist attraction. Apparently, it is not.

I read the hardcover edition of this book in 1966; I was ten, and it was in the school library-scared me green, especially "The Haunted Schoolhouse" and "The Whistle".

Over the years, I've owend the paperback edition thre times, although I don't have one currently. BTW, "The White Dove" appears on an album of ghost stories read by Vincent Price....I heard it back in the 70's, on a radio program called "Archie Rothman's Time Machine", that used to be on Sunday nights on WMMS, Cleveland.

The most frightening book I ever read as a kid. I was afraid to read the stories, but couldn't put the book down.

I saved my Scholastic copy from 3rd grade, and only recently seem to have misplaced it. I'll be looking for another copy on ebay today...

The tumbling coffins of Barbados in particular stuck with me over the decades, until I had a chance to actually visit Barbados as an adult. I located the church with the tomb and arrived by bus and foot near twilight--and discovered the absolutely creepiest church grounds and huge graveyard that I've ever seen or heard of.

The tomb is actually quite small and unassuming, and you can't actually enter it of course; it's marked by a plaque for the tourists (like me).

Wow! i missed this book.. i can still remember reading this when i was still in high school (15 years ago), just felt sorry i left the book somewhere.. wish to have it back.. love the stories, i still remember the Gauntlet in the castle, diamonds coated with clay from a cave in a mystery island that was said owned by pirates, the lighthouse and a boy suddenly disappears after jumping from the top floor, and the painting in the sewer.. oohhh creepy and gives me goosebumps even just remembering these stories.. STRANGELY ENOUGH by CB Crosby is one of the best books i have! it is never boring!

I always felt bad for the little dog.

I've been searching for over an hour because I couldn't remember the name of this book I had back in the early '70's. Only that I had ordered it from school and it had many stories in it. Now I'm off to see if I can find a copy of it. Thank you for keeping this post up.

I seemed to remember stories about a Phantom Porthole on a Ship and a Strange Blind Rat like creature whi h suddely emerges in the living room of an old house in Northern Caroliner and proceeds to search for something before disappearing in the middle of the livinv room floor.

I had this book when I was a kid in the early 70s. I don't know how I acquired it but I loved the stories! It's long gone now.